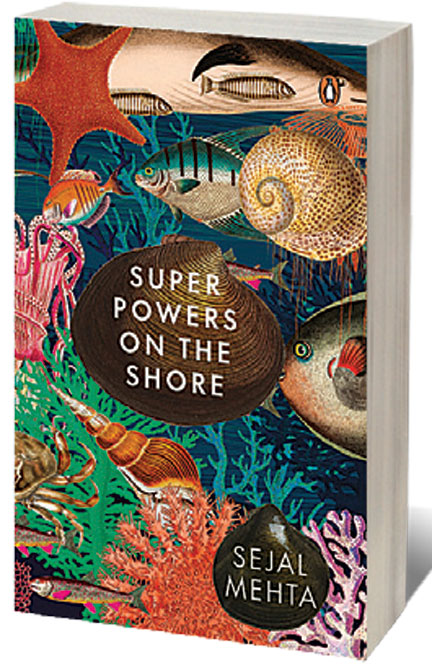 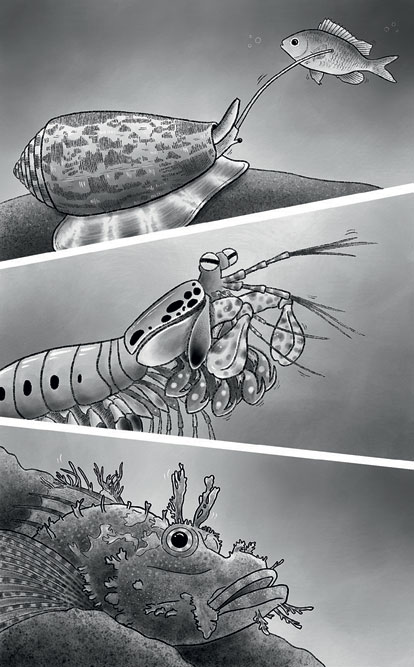 (From top: A cone snail; the mantis shrimp; and a scorpionfish (Courtesy: Superpowers on the Shore)


THIS IS A SIMPLY bewitching, scintillating little book, which I shall probably read and re-read till I know it by heart. Sejal Mehta might be appalled by this suggestion, but I seriously think all our leaden, heavyweight deadly dull textbooks—whether in the sciences or the arts—ought to be written this way: And especially all those doomsday tomes dealing with the environment.

So, what is it all about?

Well, it’s about the superpowers that live in the intertidal zone—where the mighty oceans meet the shore; about the lives and loves and appetites of “villainous assassins, shape-shifting molluscs, and regenerative worms,” about a “damn superhero kingdom”. A kingdom that 99.9 per cent of us (including me) have shamelessly ignored as we have wandered aimlessly on beaches and shorelines.

The chapter headings give us a clue as to what we have missed out on: ‘The Power of Creation’, ‘Let’s Talk about Sex Baby’, ‘Assassins of the Intertidal: Toxins, Harpoons, Brute Force’, ‘Defence Against the Dark Arts.’ You get the idea.

Best of all (especially for those who can’t swim) is that you don’t even have to go out of your depth to find a dazzling blonde tropical beach to meet these wonders. The rocky pathway leading to Haji Ali, the island dargah is crammed with enough forms of life to keep you busy for a lifetime.

You might grumble that all these strange life-forms usually have tongue-twisting scientific names, which are impossible to remember. Then why not make up pet names for them? Mehta deconstructs scientific terminology (regarding their habits and lifestyles) simply and pithily like a bomb disposal expert defusing a complicated bomb circuit.

There are lovely black-and-white illustrations too, but you can use Google if you want to see these wonders in full colour. Spoiler alert: it would help if you had a solid background knowledge of comic book and Hollywood superhero characters as there are plenty of references to those.

The information in this book has been thoroughly researched, and Mehta has spent time and effort checking out the lives of these creatures apart from talking to people who have spent hours watching how these dazzling little animals live, and what good and evil and magic they get up to.

Running alongside, is the narrative of the everyday life of the busybody, Ms. Hermit Crab, who welcomes new neighbours, and organises press conferences amongst other things.

The back flap describes Mehta as a ‘journalist and editor’ who has worked for Lonely Planet, National Geographic Traveller India etc and has written fiction for children. What it doesn’t mention is that she has an irrepressible, incorrigible sense of humour that most lead-footed ‘science writers’ would be shocked by. (A good 4,000-volt jolt would get them out of this state.) For you and me, this is what makes the book come puckishly and sparklingly alive.

Superpowers arrived for review just as I was rushing off to hospital with yet another episode of heart failure: I grabbed it and ran (and found I had to ration my reading!) My retreat had usually been the mountains, which I doubt I will ever be able to visit again. But then, there still is 7,500 km of coastline to explore and discover (and you can’t get more sea-level than that!). And thanks to this gem of a book, I will now wander the beaches with my eyes peeled and hopefully meet some of the wonderful creatures Mehta writes about, whether they are, angels or divas, monsters or demons.

PS: I plead guilty of having wandered the beaches of Mumbai for 15 years without noticing a thing. Not any longer. 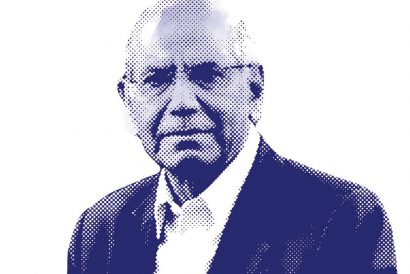