Once again inside the Black Hole with Stephen Hawking 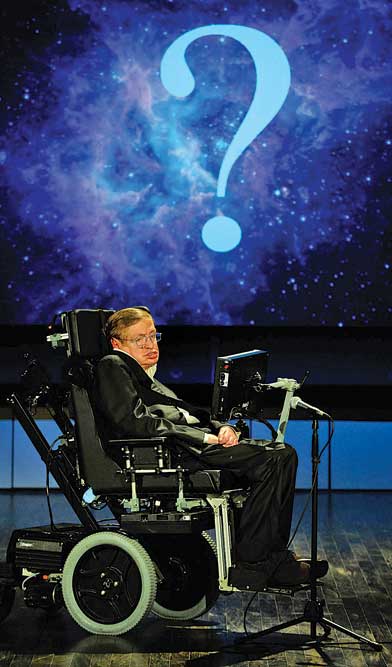 MANY OF US were first introduced to the abstruse speculations of cosmology through A Brief History of Time, a book that catapulted its author Stephen Hawking (1942-2018) to worldwide fame. We encountered a veritable grimoire of super-science that was filled with strange diagrams of ‘light cones’ and one that was ominously about the ‘death of the sun’. The fact that it took eight minutes for the sun’s light to reach earth was forever etched into my memory. These ‘mind-blowing theories’ didn’t really help me in school but did trigger an interest in such far out inquires. As critics put it, Hawking wrote ‘a book that no one may understand in order to answer questions that most people weren’t even asking’. It didn’t matter that many of the 10 million people who bought it didn’t get through to the end. They ‘at least grappled with one of the big questions of our existence’, as Hawking put it.

With this book, Hawking joins his idol Einstein as a scientist who captures the popular imagination of his era. Einstein, in the eyes of the janta, is forever the whimsical, eccentric genius, reinforced by the endlessly multiplied popular image—a nimbus of white hair, tongue sticking out, e=mc2 thrown in somewhere. Hawking, in turn, fits the triumph of mind over matter: while his body progressively succumbed to amyotrophic lateral sclerosis (ALS), his mind, untrammelled by the surly bonds of flesh, was free to wander the cosmos.

More than 30 years after Hawking was propelled to superstardom comes his last book for a general audience, Brief Answers to Big Questions. The project has a faint smell of a cash grab—rushed to the stores just months after Hawking’s death. The publisher admits the book was developed from Hawking’s speeches, interviews and essays. All this gives it a scattershot feel. The final output is a slim volume of 10 chapters, each addressing a question such as: Is there a God? How did it all begin? Is there other intelligent life in the Universe? It is reassuring that the big questions are basically everything that well-informed eight-year-old would ask.

The collection comes with an introduction by Hawking’s friend and fellow scientist Kip Thorne as well as an introductory essay by Hawking laying out the context of these big questions. The questions can be divided into two overlapping categories—those which fit Hawking’s day job as a scientist and professor in Cambridge investigating cosmology, and those, as Thorne puts it, ‘not rooted in his science’, but which reflected his wide interests, especially in the future of humans— questions like ‘Will AI outsmart us?’, ‘Should we colonise space?’ Showing how the disparate fields of science come together, the chapter on God is really about black holes, while the chapter on time travel is also a chapter on God.

The human mind is attracted to absolutes, and the black hole is very much a symbol of the ultimate absolute. A nullity, a void at the heart of it all. Hawking is drawn again and again to the zone around the black hole

At the core of Hawking’s scientific being is the imagining, the Gedankenexperiment or thought experiment. Just as a 16-year-old Einstein imagined that the bicycle he was riding was moving at the speed of light, Hawking sends his mind soaring to the far reaches of the cosmos. Witness this (from the chapter on God): ‘Something very wonderful happened to time at the instant of the Big Bang. Time itself began… consider a black-hole floating in space. A typical black hole is a star so massive that it has collapsed in on itself. It’s so massive that not even light can escape its gravity, which is why it’s almost perfectly black. Its gravitational pull is so powerful, it warps and distorts not only light but also time. To see how, imagine a clock is being sucked into it. As the clock gets closer and closer to the black hole, it begins to get slower and slower. Time itself begins to slow down. Now imagine the clock as it enters the black hole… it would actually stop. It stops not because it is broken, but because inside the black hole time itself doesn’t exist. And that’s exactly what happened at the start of the universe.’

The human mind is attracted to absolutes, and the black hole is very much a symbol of the ultimate absolute. A nullity, a void at the heart of it all. Hawking is drawn again and again to the zone around the black hole. Everything breaks down here. It is a place of violence on a cosmic scale, a place where stars are murdered in a bloodbath of superheated gas and dust.

In essence, the book is a collection of such voyages ‘at the speed of thought’ without the attendant mathematics that underpins all such speculations. This excerpt also sums up how Hawking’s central interest in an obscure astronomical oddity—black holes—would propel him to centre stage when it became evident that the final moments of a dying star could be also linked to the first heart beat of the infant universe. And indeed, the best chapter is What Is Inside a Black Hole.

Our own Milky Way has a supermassive overlord called Sagittarius A* (the asterisk indicates it is a source of excited atoms), nearly 4 million times mass than the Sun. Even you, reading these lines, are under its influence, despite it being approximately 26,000 light years away. Our solar system is caught in a saraband of an endless rotation into that night. One orbit of the sun around this centre completes a galactic year, taking approximately 250 million years.

Hawking is great at connecting the very small with the very large, from subatomic fluctuations to the structure of the universe itself. While explaining the information encoded in our DNA, he says, ‘A human is equivalent to fifty Harry Potter books.’

The most accessible parts of the book are the general questions such as colonising space and the future of humans. Hawking is clear—earth is doomed and the sooner we find an alternative world, the better. He writes, ‘One way or another, I regard it as almost inevitable that either a nuclear confrontation or environmental catastrophe will cripple the Earth at some point in the next 1,000 years.’ He is also bullish on what he calls the age of self- designed evolution: ‘There is no time to wait for Darwinian evolution to make us more intelligent and better natured.’ One can’t help but notice an almost ruthless streak in these speculations: ‘Once such superhumans appear, there are going to be major political problems with the unimproved humans, who won’t be able to compete. Presumably they will die out, or become unimportant.’

Running through the book is a deep joy in the wonder of discovery tempered with a fear of societies worldwide turning away from science. In another context, as a passage on the interiors of black holes illustrates, ‘even worse if Determinism breaks down we can’t be sure of our past history either. The history books and our memories could just be illusions. It is the past that tells us who we are. Without it, we lose our identity.’