An exploration of Chandigarh brings together unexpected works and undiscovered connections 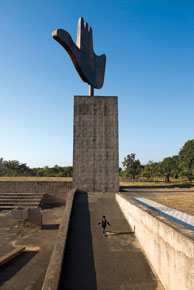 When 20 villages in a divided Punjab, on the Indian side, were cleared for a new state capital, Chandi the name of one, was chosen, and Chandigarh was born. India’s first Prime Minister, Jawaharlal Nehru, thought big. An upgrade of an existing city wouldn’t do. A new nation needed to build anew, and a break from the past was needed, Utopia re-imagined as India Modern. Chandi village’s tryst with destiny was to endow it’s name on a modern experiment, a city that came to be unlike any other in India, that fifty years later, has to be asserted in a book’s title: Chandigarh is in India (The Shoestring Publisher) edited by Shanay Jhaveri.

In a keynote address at the ongoing “The State of Architecture” exhibition at the National Gallery of Modern Art, Mumbai, Raj Rewal in the preamble to his talk about his work, spoke of the courage of the immediate post independence years. In choosing Le Corbusier as the architect for building Chandigarh, “an architect who had no big projects to his name at the time” but was known for his vision, Nehru put his belief in creativity and ideas, something, said Rewal, that was missing today “the elites today, are philistines”. Across India though, a new capital at Amaravati is being built for Andhra Pradesh (Hyderabad now the capital of the newly formed Telengana). Once again, half a century after Chandigarh, a new experiment starts, as 33,000 acres of acquired farmland. Chief minister Chandrababu Naidu promising a ‘smart, green and sustainable’ city, turns east, not west, for inspiration: Singapore architects will re-imagine Utopia for Naidu. What lessons will he take from Chandigarh, a city now lived, adapted to, critiqued, yet one that has inspired artists from both the West and here, to engage with that rupture in architectural style in city making in India, the first perhaps since the experiment that was Fatehpur Sikri?

In ‘Chandigarh is in India’, Jhaveri examines how Chandigarh’s architecture and urban planning has engaged visual artists. In the lead essay, ’Stalking Chandigarh’, Jhaveri lays the historical background to Chandigarh but does not dwell too much in the Punjab, but, often tangentially (sometimes distracting, still entertaining), situates Chandigarh with other modernist movements in India, the simultaneous happenings or the influential ‘other’ takes, that coincided with Le Corbusier’s grand experiment, or came soon after. As in Pradeep Dalal, Notes on Bhopal, on Charles Correa’s buildings in Bhopal, Madan Mahatta’s architecture photographs in Delhi Modern BN Goswamy’s objections to a show curated by Peter Nagy at the Punjab Museum of Fine Arts, Simon Starling and his installation on Manik Bagh Palace, Indore – these are engaging diversions that walk you through a scenic route, then back to gaze on Chandigarh.

The structure of the book is interesting. The essay is broken by visual segments of the ten artists projects featured (some invited to make new work). Arrows point to the page number to pick up the narrative, making the navigation easy. Much like Le Corbusier’s brise soleils, they act as text breakers, an intermittent rest for the mind to soak in image. It is a clever device, as the text resonates, one make connections, the artists’ and one’s own. Often though, the narrative was compelling and one jumped the visual, to continue the thread in thought.

“So writing is the method of using the word as bait: the word fishing for whatever is not word… I don’t want to have the terrible limitation of those who live merely for what can make sense. Not I, I want an invented truth.” Clarice Lispector, Agua Viva

Perhaps, both Le Corbusier and Jhaveri would agree.

Corbusier’s ideal city has been critiqued in the decades since lived in (insensitive to India’s climate, culture, myopic urbanism, modernist blunder). The Capitol Complex and the city laid out on a grid and in sectors have since been appropriated by nature and living. Trees have grown blocking clear vistas, security concerns have barbed wire fences across the Esplanade. Yet, concrete and immovable. “a colossal grave, a dignified ruin” (William Curtis’ poetic description of the Capitol Complex), in Jhaveri’s exposition through the book, of the ways artists draw from Chandigarh, their interpretations hingeing around the architecture, makes the architecture itself become a site specific art object. It transcends architectural beginnings, using the city itself as object, to open up a discourse that is phenomenological/socio-political/contextual.

Ten artist projects are featured, as said before, they punctuate the text.

Manuel Bougot’s photographs of the interiors of residences (2010,2011), fascinates. This is the Chandigarh one doesn’t often see: the modernist shell, designed by Pierre Jeanneret and Jane Drew, now lived with half a century of appropriation. Plastic mats line concrete shelves, light filters through large, square gridded windows, niches in the walls now woodlined, gaudy floral carpets clash with grey concrete fireplaces. In its mundanity, through the simplicity of form, it swirls thought of the time it was built, that fantastic dream of a city being built for unknown, displaced lives, by ‘outsiders’, now years later, pillowed and carpeted, family pictures hung and artefacts displayed, by inhabitants in a city with the highest per capita income in the country.

Cyprien Gaillard’s Indian Palm Study II has polaroids of the trunks of palms in Chandigarh. In close-up and framed in a skewed square, glimpses of buildings can be seen in some. He renders the trunk to an architectural framework – like a column, it appears as leitmotif across the city, what is seemingly banal gains potency in faux architectural re-iteration. Shezaad Dawood’s acrylic on textile uses geometry and fabric, much like Corbusier’s tapestries that line the inner walls of the Assembly. He is “inclined to speculate on the tantric conversion of CEJ (Corbusier) that would illumine his drawings and the resulting metaphysical geometry …”. Indeed, that Corbusier drew and painted is well known yet “this diminished after 1930” notes Martin Filler in his book Makers of Modern Architecture’(2007). “As he garnered more and more praise for his architecture he became increasingly obsessed with gaining recognition for his pictures; there is pathos in a master of one medium yearning vainly for acceptance in another at which he could never excel. Not content to be the Picasso of architecture, Le Corbusier wanted to be the Picasso of art as well.” ‘Chandigarh is in India’,a book on artists responding to his architecture, would have intrigued Corbusier.

Yamini Nayyar, Seher Shah and Thukral and Tagra are all informed by the geometry, architecture, light, numbers and the grid of the city, each working within the tropes of their practice. Jhaveri’s assemblage of these projects and references to other works through his essay brings a wide range of art and film to notice, drawing on his continued engagement with South Asian art and film. Chandigarh today, is fertile ground far from its barren beginnings, drawing artists, filmmakers, photographers, writers as much as it does architects. Revealed though, is how much more Western artists (Gavin Hipkins, Dominique Gonzalez Foerster, other featured projects ) have responded through the decades as opposed to lesser engagement by Indian artists. Nilima Sheikh offers an explanation: “I think in some ways, there was in Baroda not a very open mind about Chandigarh…There was an a priori prejudice against the fact that it was so planned and about the supposed lack of organicity …it strikes me now that there was a slight snobbery regarding its supposed sterility, despite a grudging admiration for its architecture …”

Jhaveri’s essay is followed by Erika Balsom’s excellent piece on how Chandigarh has been evoked in films, and by Devika Singh laying a thorough historical background through photographical responses. Both refer to the ‘double violence’ Chandigarh’s foundations were laid on, that of partition and of the clearing of ground and displacement. Balsam touches on Jarvis Cocker’s visit to Nek Chand’s rock garden in Journeys to the Outside (1998), a television series devoted to outsider art and the “profound gap that exists between Chandigarh as planned and Chandigarh as lived.” Singh draws on Pierre Jeanneret’s snapshots of the villagers who helped build Chandigarh. Of labour, object and the peripheral, she draws attention to modes of production in India, “mainly handmade, contrary to the modernist tenets of predetermination and predictability”.

As Singh observes “rarely has an architectural project become the subject of creative inspiration of such international reach.” Jhaveri does justice to this wide reach/curation. It constantly surprises in the turns the book takes, in text and visually, weaving a rich tapestry in imagination and bringing together unexpected works and unexplored connections. My favourite is Jhaveri’s take on how Berluti, a fashion label, had its designer Alessandro Sartori inspired by Chandigarh for the Spring/ Summer 2016 ready to wear collection. “The crisp delineation between the concrete of the city and the verdant parkland that surrounds it, is reflected in the bright colours and the sharp silhouettes of the clothes.” The clothes crafted from lightweight textiles freed from inner linings was a ‘chromatic feast’. Sartori dip dyed the fabrics in grey before other colours were applied – concrete grey layered with turquoise, zircon yellow and more, much like the technique used for ensuring patina in buildings in the Mediterranean as the top layer weathers. Concrete and colour had Chandigarh summed up in clothes, inspiration has unexpected geographies and ways.

Using Chandigarh as a ‘wager’, Jhaveri has edited varying ways of winning manifestation, such that if Chandigarh is in India the reader of this book is definitely within the idea that is Chandigarh, probably in ways he/she may have never envisaged. Often an exhibition produces a book or catalogue. Jhaveri’s curatorial provenance is very much at fore – the book could well be an exhibition. Its production as a heavy tome is a drawback, the layout invites a dip into and out which possibility is made arduous then, but then again the weight is much like the concrete all things Chandigarh informs.

His two previous books, “Western Artists and India: Creative Inspirations in Art and Design,” (2013), and “Outsider Films on India: 1950-1990,”(2010), and his prolific writing on art and career as a curator (recently appointed as the Assistant Curator, South Asian art, within the Department of Modern and Contemporary Art at the Metropolitan Museum of Art, New York) and his interest in art semiotics at Brown, gives Jhaveri a solid bedrock that few curators from South Asia as young as him have. His focus on South Asia has brought a deep understanding, his engaging both past and present as a series of propositions that his three books state, act as springboards for new knowledge and exhibition making. There are several books on Chandigarh, all engaged with the architecture, urbanism, modernity, but none that parallel the lens this book uses – in that, Jhaveri, using art, throws new light on Chandigarh. Curtis’ “ruin” is quite alive. This book has the possibility of two distinct audiences – artists who will be inspired by the ‘site specific object’ that is Chandigarh, and the denizens of the city who may fathom new ways to understand the experiment they live in.

“More than the instant, I want its flow.” Clarice Lispector, Agua Viva

Chandigarh was built at a particular time. Jhaveri has illustrated well, that this experiment in India, transcends that time, style, history, and context, and once boldly imagined, it continues to “flow”.