The Ramayan holds interest for India’s contemporary generation a million years since its first oral telling. 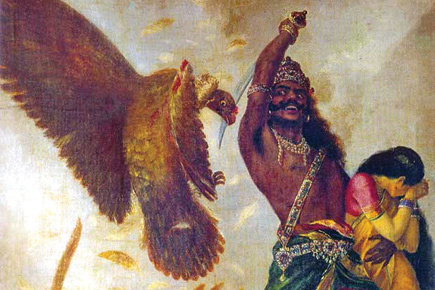 The Ramayan holds interest for India’s contemporary generation a million years since its first oral telling.


So Raavan, has been declared a dud. However, the kids in the playground are making monkey faces and going “Bakbakbak”, imitating Abhishek Bachchan’s loopy act in the film. This is indeed a different version of the epic written millennia ago.

Yet, The Ramayan has not lost its charm, as it reappears with regularity, be it through television, animation, fantasy fiction, comic books and now, Facebook pages. “Remaking The Ramayan is a cynical exercise, but a guaranteed winner, like manufacturing cola,” says Samit Basu.

Basu would know. As a popular writer of science fiction and fantasy fiction, he confesses that the epic is not past its sell-by date. He has had Bollywood producers nudging him to work on the screenplay and story for a three-part series on the epic. “Basically, a Lord of the Rings-type trilogy,” he points out dryly.  He has desisted because it’s “just lazy” retelling a classic story since it will sell without any value addition to it.

It is interesting how The Ramayan is revisited for the consumption of a young adult generation, brought up as teletubbies in a visual age. Anil Menon, author of The Beast with Nine Million Feet, is editing a speculative fiction anthology on The Ramayan. He says, “The Ramayan is rich in emotions, relationships, action, religious ideas… there’s something in it for everyone, including the family dog. Like all great epics, it leaves many things unsaid. That encourages listeners to make the epic their own; enables them to tell it the way they think it should be told.”

“Human nature doesn’t change over mere millennia. We may not have quite the same dilemmas or temptations as Sita or Rama or Ravana, and flying monkeys are sadly not in evidence in our world, but the twists and turns of the story provide metaphors for our own existence,” says Vandana Singh, a writer of fiction for young adults who is co-editing The Speculative Ramayana for Zubaan with Menon.

The anthology that is slated for February 2011 has thrown open an invitation to writers to rewrite the stories of The Ramayan with a ‘speculative element’ to include sub-genres like magic realism, science fiction, fantasy, new weird, slipstream and more. The idea is to use the stories in an ‘innovative way’, with feminist perspectives, literary stories and much else.

With a growing market for animation and the success of cartoon characters like Hanuman, Ganesha, mythologies offer an easy way out for producing entertainment for those without a big idea. “There’s a big cultural guilt factor where parents buy bad versions of the epics because they feel their children aren’t experiencing enough,” says Samit Basu. He is not surprised then that it’s the safest way for producers or publishers to make money selling things to kids “as long as they don’t court controversy”.

The changing dynamics of The Ramayan is more to do with contemporary retelling and interpretations in a visual manner and allying it with the realm of imagination. It is easy to appeal to the youth while speaking in a language that is not turgid or archaic. Menon says, “Today’s language is the visual language of the movies, and epics make great movies. The Ramayan speaks to the 3 Idiots generation, but it can’t boss them around. It simply does not have the moral authority it once had. It’s a very old text after all, and we have learned quite a bit since it was composed. Our answers are not just different; they are also more humane. I think Valmiki would be very pleased.”

In the 1980s, The Ramayan had invaded drawing rooms through its televised versions, leading to political uprisings. But, since 2003, Ashok Banker’s Ramayana—a three-part series including Prince of Dharma, Prince of War and Prince in Exile—has been hugely popular and young adults are finding in his other works, King of Ayodhya, Bridge of Rama, Demons of Chitrakoot, Siege of Mithila and Armies of Hanuman, their thirst for elements of the fantastic. Buoyed by the monster success of his epic narrations, Banker is set to release his first non-fiction work, The Valmiki Syndrome, this year end.

“It is exciting to explore an old tale in new ways. It keeps it alive,” says Singh.   As so it has been. Since the huge success of the animated Japanese film Ramayan: The Legend of Prince Rama among children and young adults, the epic is constantly being reinvented in newer comic book versions, away from the world of Amar Chitra Katha.

In 2006, the first issue of Ramayana 3392 AD, as envisioned by gyaan guru Deepak Chopra and filmmaker Shekar Kapur, was published by Virgin Comics. Chetan Desai’s animated Ramayana will have Bollywood actors Juhi Chawla, Manoj Vajpayee and Ashutosh Rana playing voice artists for the epic characters. There is also Mahayoddha Rama, a 3D animated movie in which Kunal Kapoor, Jimmy Shergill, Gulshan Grover and Sameera Reddy are said to be lending their voices for the principal epic characters.

Pentamedia Graphics have tasted success with the 2005 animation Hanuman, and more animated series like Kumbhakarna are in the making. Then, a Hyderabad-based media production house, The Kanipakam Creations, is working on a 2D full-length animation feature film called Lava Kusa.

If a young  generation finds its Ramnavi and Dussehra festivities excuses for partying, their attitude to the epic characters is not reverential like the awe that calendar gods evoked in earlier generations of believers. The Ramayan interests them as fantasy, as animation and embellished with movie magic. “Our young people may no longer take festivals and rituals seriously, they take evil seriously. They are deeply concerned about injustice, prejudice, inequality, the state of the world,” says Menon.

In that sense, American filmmaker Nina Paley’s animated film, Sita Sings the Blues, lent a contemporary voice and feminist angst to the epic. Singh confirms that the epic can resonate with young feminists of today. The moment Sita leaves Rama and her sons and “goes home—not his home, but hers—is to me one of the most moving and revolutionary moments in the story. To me, that is when Sita comes into her power.  Aren’t such stories being enacted still, in our own time?” asks Singh. Menon adds though, “Sita didn’t have much control over her life. Modern women do. They owe it to their ancient sister to make full and vital use of that control.”

Certainly, the epic raises questions that are still with us. As Anil says, we don’t have to accept its answers, which belonged to a different era; we each have to find our own answers, write our own Ramayans.

Since historians have agreed that The Ramayan is not a single work but, as Basu says, “a work in progress for over five millennia”, it continues to spring delight in whatever form it is evoked, if rightly done. “I’d say The Ramayan has returned to its natural medium: visual, enacted and full of special effects,” says Menon.

Obviously, The Ramayan is a tale that will never stop being retold.