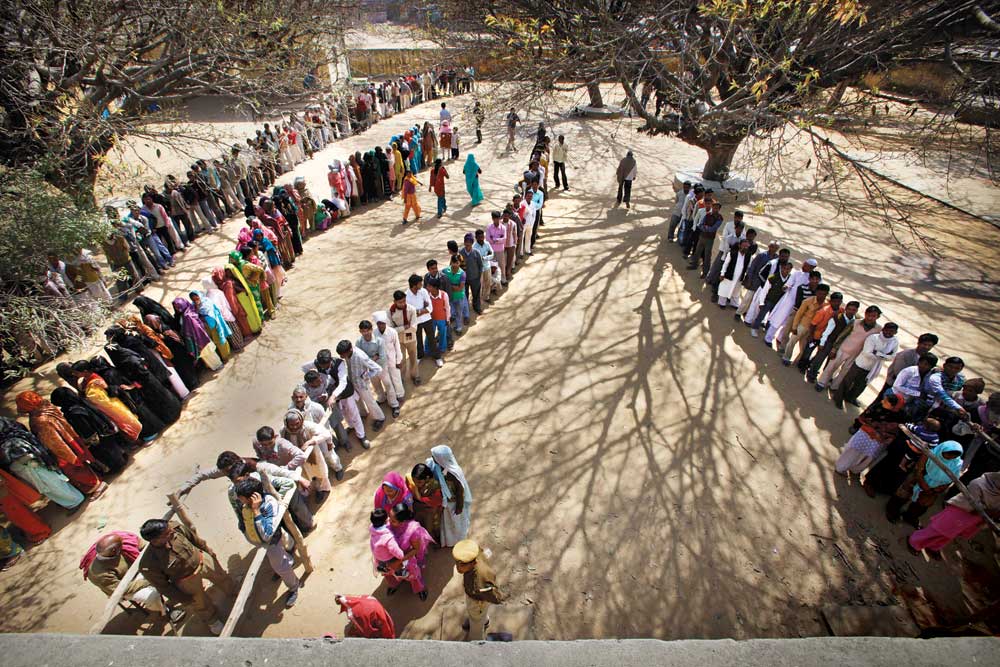 THIS BOOK IS remarkable not because it uncovers something deep and concealed from the ordinary eye, but because it reveals the extraordinariness of things that had all along been in obvious sight, perhaps so close that we just did not see it. Ornit Shani’s book breaks new ground because she relates the enduring character of Indian democracy to something so humdrum, so routinised that it has remained unaccounted for in the story of Indian democracy—the conduct of universal adult franchise. Her book, as Shani says, is ‘the first study of the interrelationship between the making of universal franchise and the evolution of democratic citizenship.’

The book recounts how the preparation of the first roll on the basis of Universal Adult Franchise—interestingly, scaled-up and modelled after the enrollment for adult franchise in the state of Tranvancore—played a very significant role in both constituting and sustaining democracy in India. It reminds us that Pakistan, with whom we share our colonial history, took almost two decades to hold direct elections based on universal adult franchise and in that perhaps lie clues to its fragility.

The book pushes you to imagine the gargantuan task of enrolling millions of people for the largest list of voters in democratic history at that time. How does a nation in the midst of a partition that was tearing the Subcontinent apart, that was dealing with 18 million refugees and that was in the process of integrating 552 princely states, undertake the mammoth task of enrolling 173 million people for the conduct of elections? The book asks you to imagine the administrative stakes that were involved and the work that went into envisioning an enrolment process that had no precedent, either in colonial history or that of the democratic world. It takes you through correspondences between the Constituent Assembly (CA) Secretariat, Fundamental Rights Committee of the CA, President, Prime Minister, premiers of provinces, governments of states, Reform Commissioners, citizens’ groups, refugee associations, to name a few in an unending chain of command, instructions and feedback. It takes you though issues that ranged from the technical—like the combining of census and franchise enrolment, voluntary versus house-to-house enrolment, qualifications of a citizen, status of migrants, ‘good vs bad refugees’, marking out of constituencies—to the banal, like the shortage of paper, costs, design of printed forms, refusal of women to register under their own names, and so on.

Add to this the context of the political turmoil, the Partition devastation, the social upheaval, violence, migration, poverty, illiteracy, caste and untouchability. Given the enormity of logistical, administrative and technical problems, this colossal task of voter-enrolment could easily have been abandoned had it not been for the dedication and passion of early nationalists like Nehru, Ambedkar, Azad, Patel and innumerable others. To ignore their leap of faith, to belittle their ambition and imagination, is to diminish the very idea of Indian nationhood. This is how India got democracy for the very first time (never mind the ahistorical references to the ancient state of Lichchavi).

There is something deeply transformative about the institutionalisation of the idea of ‘one women, one man, one vote’ in a hierarchical society such as India

Shani’s aim, however, is not just to narrate the story of the franchise enrolment journey. The story of the preparation for the first elections (that begins after the draft constitution is tabled but before the Constitution is adopted in 1950), according to her, is inextricably linked to the process of constitution making. It was a process through which ordinary people got to participate in the ‘making’ of the Constitution. They had already, she says, ‘demonstrated an understanding of the constitution even before its enactment’. The preparation of the rolls stimulated constitutional debates outside the CA between administrators and people on citizenship, election and draft constitutional provisions. This, for her, constituted ‘shaping of the constitution from below’.

This is a key thesis of the book. And the ambition of this thesis is to mark a departure from studies of Indian democracy conducted from the ‘ivory tower of Constituent Assembly’ and from the ‘high politics’ perspective. These, the book argues, have only ‘examined the ethical vision and political theory that underlie the constitution, and the process and role of debate in arriving at the final constitutional settlement.’ These narratives ignore the role, impact and presence of people in the making of India’s constitutional democracy. Ordinary people, Shani writes, were not bystanders. They were participants.

The idea of the Constitution being made ‘from below’ features in the introduction, in chapters two, five and again the concluding chapter. It is therefore a central and a repeated claim. While an institutional story of how India became and stayed democratic is ground-breaking and this is a work that truly enriches the field of Indian democracy, the proposition of a ‘construction from below’ needs to have more substantive standards than set in this book. It is true that the network of deliberations, discussions and feedback between administrators, people, citizen-groups and CA Secretariat created a cycle of substantive and legal-technical arguments. But it is equally true these were mostly related to draft constitutional provisions relating to citizenship and voting rights, and/or to the federal or architectural provisions. Instances like the Assam Citizens’ Association’s (Dhubri) inputs for amendments that would protect their fundamental rights to property and speech, as also cultural and educational rights, were less common than issues of anomalies, appointments, legislative and federal division of power, voting rights of refugees, their residency requirements and so on. Of course, from the process of enrolment emerged, as the book states, ‘some scope for influencing what was to become their frame of reference as citizens’, but the idea of a constitution-making from below needs to encompass more than the mere ‘influence’ of people. It also needs to ask: who was doing the influencing and what was being influenced?

The term ‘people’ or ‘groups’ as a reference for ‘influencers’ is both capacious and misleading. It is a term that papers over class, caste and ethnicity distinctions. If indeed it was a making-from-below, we need a story that affirms the participation of the poor and downtrodden, of Dalits and tribals, in the making of the country’s Constitution. The ‘below’ story also needs to take into account what was being influenced, especially since most of the provisions for social justice ended as non- justiciable Directive Principles.

In my reading, the ‘constitution- making-from-below’ narrative is a needless burden on an otherwise enlightening and path-breaking book. It is path breaking not because it helps us see anew the back-story of the Constitution of India, but because it helps us to understand the contingent link between universal franchise and the depth of our democracy.

The institutionalisation and bureaucratisation of the notion of procedural equality for the purpose of electoral voting ensured that democracy ultimately and irreversibly entered the Indian political imagination and lent it its enduring character.