Bringing Back the Queen

AN Wilson’s majestic biography rehabilitates the much misinterpreted Victoria 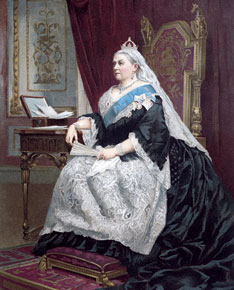 AN Wilson’s majestic biography rehabilitates the much misinterpreted Victoria

For Post-war conservative politicians in the United Kingdom, the Victorian era conjures a rapture of morality and empire. Prime Minister David Cameron’s ‘Big Society’ has its roots in the 1800s. The former Secretary of State for Education, Michael Gove, pre-eminently keen in alluding to all matters carnal, has described Victorianism as an ‘inner fantasy’ for Tories. And the Ayatollah of modern British Conservatism, Margaret Thatcher, once said of the era: “Those were the values when our country became great, but not only did our country become great internationally, also so much advance was made in this country.” We can only speculate how the Iron Lady would have acquitted herself in the presence of the Empress of India.

Alexandrina Victoria’s reign of nearly 64 years is both the longest in British royal history and the most prolonged of any female monarch. For most observers, however, she exists in black and white, in her imperial final years; or, as a frowning ogress dressed in widow’s weeds. Indeed, she is both present and absent. For, after the passing of her husband in 1861, Victoria undertook a prolonged seclusion. The Times called her ‘the Great Absentee’. A notice was even placed on the railings of Buckingham Palace, offering the residence for sale or let. Who was the real Victoria? Whoever she was, she certainly would not recognise the cloak of piety which dresses her legacy after her time. But now, AN Wilson’s new and elegant biography of Victoria makes an authoritative case for rehabilitating the queen from dowager status. Victoria: A Life is not history as revisionism, nor do its 650 pages unearth any new treasures from the royal archive. Instead, its subject emerges as both playful and sullen; flirtatious and stern; petulant and calculating. She is, as Simon Schama once wrote, ‘the Sentimental Sovereign’.

Alexandrina Victoria—taking her mother’s name was an afterthought; she was originally to be called Georgina—was born in 1819 into a nation recovering from the Anglo-French wars. Unlike the majority of Elizabeth II’s reign, where former British realms have turned into republics, Victoria’s rule cannot be separated from its European context of expansion and empire. She grew up as an immigrant in London, and her mother spoke imperfect English. For all of her adult life, Victoria would fill her journals with German and English prose. Life for many of Victoria’s subjects was unfair. The middle classes—an increasingly important section of the population—had no vote. In every branch of government—including the courts, the Church, the judiciary and local authorities—nepotism and bribery were rife, as well as loans. The landed gentry both owned and administered the country. Writes Wilson, ‘Britain in those days was very far from being a democracy. It was governed by an oligarchy of aristocratic, landowning families.’ Victoria’s rule also coincided with sweeping electoral reform, the fires of republicanism in Europe, fighting in the Crimea, Prussian military expansion, the American Civil War and the industrialisation of the United Kingdom. The Napoleonic conflicts had also exacerbated periods of famine and unemployment. On 16 August 1819 in Manchester, a crowd of 60–80,000 gathered in St Peter’s Field to listen to the radical reformist Henry Hunt. Local magistrates ordered the cavalry into the crowd and in the violence which followed, 15 people were killed and around 700 wounded. Throughout Victoria’s career, bloodshed would amplify bloodshed not only in England and Ireland, but in colonies as far as India.

Previous biographers have noted that Victoria was no modernist, nor was she a liberal. Decade after decade, she would utilise the power of the crown to her advantage. She was served by 10 prime ministers in total and would outsmart nearly all of them. Parliament’s failure to consult her on army and navy appointments would lead to terse correspondence. Politically, she was a Tory who abhorred radicalism in any guise. She also had a strong aversion to the burgeoning feminism movement. In 1870, Victoria told William Gladstone of her revulsion at the thought of female medical students. Yet despite her traditionalism, by the end of her reign, British democracy had flourished and would ensure the survival of the modern constitutional monarchy. Victoria’s politics extended only as far as Europe or the United States. Wilson makes little comment about her opinions on British interventions in the Middle East and Asia. She deplored the tide of rising violence in India, but noted the strategic and economic importance of the country as a defence against Russian imperial interests. In her time, spices and jewels were shipped to London in abundance. She counted a number of Indians as friends. She had one Indian god- daughter—Princess Gowramma of Coorg—and helped raise Duleep Singh, the last Sikh Maharaja of Punjab. Both were raised as English children and converted to Christianity at an early age. One of her most enduring relationships was with Abdul Karim, the son of an Agra-based doctor. Karim arrived in London in 1887—the year of her Silver Jubilee—to teach Victoria Hindi and Urdu. He was, she said, a “thorough gentleman”. But, appalled by the ‘munshi’ who cooked chicken curry, daal and pilau, the royal household went as far as to threaten mass resignation.

Away from the royal court at Osborne House, Wilson is more revealing on the complicated German connections which dominated Victoria’s life. At the time of her birth, Germans existed as the subjects of princedoms and duchies. They were united in the 1860s through the efforts of Otto von Bismarck. By the time of his death in 1898, he had overseen the overhaul of the German war machine and the creation of a reich. That this unification would—after Victoria’s death—lead to the disastrous Great War was not foreseen. Germany would also give Victoria her most profound relationship— with her husband, Prince Albert (Francis Albert Augustus Charles Emmanuel—of Saxe-Coburg and Gotha). They married in 1840 at the Royal Chapel in St James’ Palace. He was tall, striking and confident in his abilities. She was, in her own words, “rather small for a queen”. The marriage was an obsession for her, and she was inconsolable when he died in 1861 of a suspected typhoid fever. She blamed her son Bertie—he had been conducting an affair with an actress— for the tragedy. She never forgave him. Furthermore, she mothballed the Blue Room, the site of Albert’s passing. Clocks were stopped at 10.50 pm, and his final glass of water remained untouched. Her household worried she had become insane.

Wilson is at his strongest when discussing Albert’s achievements. He was, says the author ‘the only member of the Royal family in recent memory, or perhaps ever, who deserves the name of genius.’ Albert here is a liberal and modernising force. His achievements include his work as Chancellor of the University of Cambridge, the expansion of the royal art collections, the foundations of Wellington College and the Great Exhibition at Crystal Palace in 1951. The Prince Consort also founded the Natural History Museum, the Royal College of Music, the Royal College of Art and the Science Museum in South Kensington. Critics at the time labelled the area ‘Albertopolis’. Albert was an egalitarian who was motivated by the arts, science and the alleviation of poverty. Having endured the collapse of European monarchies, he viewed England as a Darwinian experiment in democracy. In 1849, Wilson tells us he wrote to his brother Ernst saying: ‘At present the democratic and social evils are forcing themselves on the people. The unequal division of property and the dangers of poverty and envy arising therefrom, is the principal evil. Means must necessarily be found, not for diminishing riches (as the communists want) but to make facilities for the poor. But there’s the rub. I believe this question will first be solved here, in England.’

Most historians have always expounded the theory that Victoria’s was a life in redux. Her time as Queen is reduced to two acts: her marriage to Albert and the colourless period of widowhood, depression and withdrawal which followed his death until her own passing. Wilson rejects this consensus. Victoria was married for only 20 years and while she was undoubtedly devastated at the loss of Albert, men such as Lord Melbourne, Lord Salisbury, Disraeli and John Brown orbited her like satellites, he recounts. In this erudite and absorbing biography, which vividly chronicles the forces which shaped the United Kingdom at the height of empire, Wilson never interprets the lessons drawn from Victoria’s life by her descendants. She exists in isolation, if not always in splendour. Victoria would be succeeded by the Prince of Wales—according to the Pall Mall Gazette, ‘the fat little bald man in red’. Kipling described Edward VII—who became King when he was 59 years old—as a ‘corpulent voluptuary’. To Henry James, the playboy prince was an ‘ugly’ omen for ‘the dignity of things’.

The most accurate comparison to Victoria is, rather, Queen Elizabeth II, who will likely surpass Victoria’s milestone reign in 2016. Elizabeth has ruled over a modern, post-war state. Her monarchy allows no isolation from public view. The macabre tabloid ghosts who haunted Diana Spencer—and the charges of callowness directed at the House of Windsor in the wake of her funeral in 1997—have spurred the inhabitants of Buckingham Palace into transparency and confession. Elizabeth now occupies our shared content world of Facebook, Twitter and parachute jumps with Daniel Craig. Her approval ratings poll consistently higher than most of her prime ministers. Queen Victoria would undoubtedly approve.

(Burhan Wazir is the editor of Qulture.com. He has previously worked for The Observer and The Times)