Bringing Back the Ally 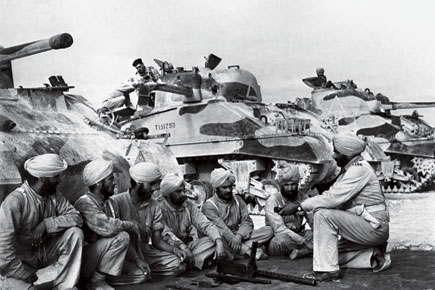 In 1947, the United Kingdom left India, its last major colony. During one of the largest migrations in history, involving around 15 million individuals, the religious violence of Partition consumed Hindus, Muslims and Sikhs. Between one and two million people would perish in the genocides, rapes, abductions and arson. In 1947, the Indian Subcontinent was still recovering from the aftermath of World War II. Over the years 1939 to 1945, its citizens had been dragged through the flames of Nazism and Communism. Indian soldiers died on the battlefields of Egypt, Eritrea, Ethiopia, Burma, Italy and Germany. At home, colonialism, racism, inequality and illiteracy defined the lives of ordinary Indians. Injustices in domestic and international arenas would weaponise the fight for Independence.

It is a period revealed in considerable and sympathetic detail in British historian Yasmin Khan’s authoritative new book, The Raj at War: A People’s History of India’s Second World War. Much of Khan’s chronological history is compiled from new interviews, official documents and memoirs written by officers, soldiers and politicians during the era. The Raj at War illustrates a colonial power whose rulers were wholly unprepared for the economic and military challenges of war on two fronts. It also lays bare the many sacrifices made by their subjects, who found their destinies tethered by two distant wars.

In 1939, the conflict in Europe initially appeared alien from India. English officialdom—imperial officers who lived in mansions and bungalows— believed that India would remain isolated from the ideological and geographical wars tearing apart Europe’s democracies, monarchies and dictator states. As Jawaharlal Nehru, the first Prime Minister of independent India said, Khan reminds us, the period was ‘the quiet uneventful past’. Nehru had spent nearly three years in prison: ‘We could only hear very distantly the far-off drums of the Great World War that was going on then.’

Yet as the conflict expanded, the British Empire was forced to draw on all its worldwide resources: manpower, agriculture, industry and logistics. The United Kingdom would demand greater commitments from its subjects than in conflicts past. In the First World War, for example, over 300,000 Indian soldiers had left the Subcontinent to fight in the Middle East, Europe and Africa. Those numbers would accelerate during World War II.

The obligations of the colonial workforce in World War II were staggering, Khan tells us. Some five million men and women, culled from British-held territories, joined the military ranks. Almost half of them originated from South Asia. In the first three months of the war, 53,000 men were enlisted in the Indian Army; by late 1940, 200,000 a month were joining the ranks. By the end of the war, the army was over two million men strong, a vast engine which required food, clothing, arms and shelter. World War II saw India develop new infrastructure, roads and factories; it also witnessed the mass migration of India’s agrarian farmers to its major cities. Additionally, the country also had to accommodate wounded and shell-shocked soldiers, famine, disease and thousands of European and Asian POWs.

Indians enrolled in military service in myriad ways and for varied reasons. The Indian army had both loyalist, pro- British soldiers and recruits who were dragooned by landowners or overseers. Recruitment was rarely selective. In Bihar, for example, John French, a British recruiting officer, drew on melas and country fairs. He described the scene as ‘thousands buying, selling, beggars, holy men, stalls’. In the princely states, rulers assembled soldiers in an act of fealty to their British rulers. The day after World War II was declared, the Maharaja of Kashmir offered to leave India for any theatre of war: ‘I have available in Jammu a reserve of man-power which has been judged… excellent fighting material and of this I have decided to give the benefit to His Majesty’s Government.’

Recruitment in poorer neighbouring countries stripped them of menfolk. In Nepal, the enlistment of locals was to have a disastrous effect as recruiting parties invaded remote villages to find supplies of young men. Gurungs, Rais and Limbus, collectively known as Gurkhas, would distinguish themselves in the British armed forces, but left behind entire districts inhabited only by the elderly, women and children who were unable to fend for themselves. One widely known Nepalese folk song to this day is called Mother May Ask Where My Son Has Gone, popularised by the folk singer Jhalakman Gandharva, who served as a Gurkha.

Separate to Indian sacrifices abroad was the issue of increasingly transparent colonial failings at home. Both administrators and their subjects were cognisant of the fact that the Empire was falling short of delivering skills and empowering ordinary Indians. After 300 years of rule, 90 per cent of the Indian population still lived in terrible, abject poverty. More than 50 per cent of Indians were reliant on either day wages (the modern equivalent would be zero hour contracts), or seasonal work. They neither rented nor owned any land. Of a total population of 380 million, most lived as subsistence farmers and were vulnerable to predatory landlords, corruption and blight. Literacy in 1939 was 12.5 per cent, and life expectancy was 26 years of age.

Frustrated with a lack of progress, Indians voiced anti-British and anti-war sentiments. By the middle of 1940, small pockets of resistance had begun to erupt across the country. Initially, Indians were prosecuted for relatively minor offences such as printing anti-war leaflets. By 1942, however, the pro- Independence movement had calcified. Railway engines ran covered with Congress flags; an aircraft hangar was burnt to the ground in the United Provinces (today’s Uttar Pradesh and Uttarakhand), and workers were encouraged to sabotage production at ammunition factories. Sabotage and disruption were the weapons of choice in districts in Bombay, Gujarat, United Provinces, Bihar, Central Provinces, Madras, Delhi, Bengal, Orissa and beyond.

Another unforeseen consequence of Indian engagement in Europe and North Africa was to expose a natural sympathy for fascist and communist ideologies, we learn. Indians, unaware of the many tragedies unfolding in Nazi Germany or Communist Russia, were drawn to the nation building rhetoric of their leaders. In India, Hitler, Stalin and Mussolini had millions of Indian admirers, and books about them sold in great numbers. The idea of a supreme race or a dominant nationality was celebrated by religious militants such as the Rashtriya Swayamsevak Sangh (RSS), whose leaders openly celebrated Nazi methodology.

In mainstream politics, the war would also harden the resolve of the organised movement. A draft of a resolution that the British ‘Quit India’ was presented to a Congress Committee on 27 April 1942, bearing Mahatma Gandhi’s authorisation. It declared foreign troops in India to be ‘harmful to India’s interests’ and ‘dangerous to the cause of India’s freedom’. A British clampdown on urban unrest followed— there were between 60,000 and 90,000 detentions during the second half of 1942—but only hardened Indian resolve.

Khan, whose previous book The Great Partition: The Making of India and Pakistan won the Gladstone Prize and was shortlisted for the Orwell Prize in 2008, expertly develops the requirements of Empire and the sacrifices made by Indian society. The numbers of Indians dead and captured are astounding. Over the course of the war, 6,600 Indian merchant seafarers would lose their lives. About 15,000 to 17,000 Indians were taken prisoners of war in the campaigns around the Mediterranean. An estimated 80,000 Indians lost their lives in the flight from Burma alone.

The Second World War would provide the remaking of Europe after 1945, in Khan’s view. In the face of American expansion, the Communist bloc would hermetically seal itself off from the West for nearly half a century. War-damaged countries like Germany, France and the United Kingdom pursued social mobilisation by liberating populations, financial markets and providing essential services. In a revealing passage, Khan writes of how the euphoria of victory overlooked its debt to India: ‘In Britain, post-war reconstruction and regeneration quietly erased the Indian contribution which was at odds with the story of plucky small-island British heroism and outdated in the heady days of post-war British modernism and architectural innovation.’

The debt of modern European prosperity, however, has its roots in the Empire. In perhaps the most scholarly account yet of India’s World War II, Khan has eloquently written of how it was dragged into the pull of industrialisation and manpower. Yet, it was only in 2002 that the Commonwealth installed a memorial on Constitution Hill in London to honour the role of India’s war dead. Britain should do more to honour the blood spilt by an essential ally.

(Burhan Wazir is the editor of Qulture.com)