Blood on the Border

A new crop of writers are adapting the the tried-and-tested spy thriller to an Indian context, for an Indian readership, with a familiar villain 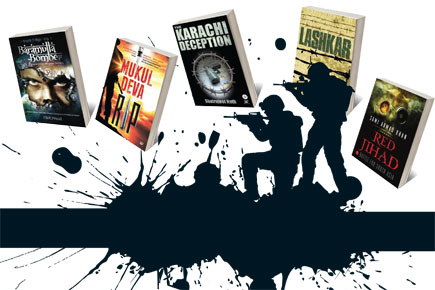 A new crop of writers are adapting the the tried-and-tested spy thriller to an Indian context, for an Indian readership, with a familiar villain


Lifting the glass to his lips, General Dixit took a long, slow sip of the scotch. He used the opportunity to observe the other three men over the rim of his glass. To his left sat a fair man in a shiny grey suit. Not a day older than forty, he had a thick mop of hair and a black moustache. His eyes twinkled merrily when he smiled, crow’s feet crinkling the corners of his eyes. Colonel Surinder Mohan, one of the best marine commandos and intelligence and counter- insurgency specialists India had ever produced. He was also the chief architect of Unit Kilo.

— From Karachi Deception by N Shatrujeet

The protagonist: An Indian para commando (such as Colonel Mohan), a retired war hero, a high- tech artillery specialist, a R&AW agent or a Naxal commander. He does not have the abilities of a Superman or Wolverine, but definitely a cold, calculating mind and the physical combative power of a Jason Bourne or Ethan Hunt. He picks his own team of experts, has a supreme sense of duty and is constantly on the prowl on a covert mission.

The bad guy: A Pakistani jihadi, an ISI agent, a Taliban operative, a terrorist, an underworld don on the run, a corrupt politician, a scheming bureaucrat or even the leader of a town of zombies in Afghanistan.

Put a mix of such characters against the backdrop of a familiar neighbourhood— Bijwasan, Noida Sector 37, Shakurbasti, Soami Nagar, Panchkula, Pragati Maidan or ITO. Construct a plot that involves them in spy games, vigilante missions or anti-warfare gimmicks, with some secondary female characters thrown in. Add the spunk of bestselling Western authors such as Tom Clancy, John le Carré, Ian Fleming, Ken Follett, Robert Ludlum or James Hadley Chase. What you get is a typical Indian spy thriller.

“The India-Pakistan military thriller has been done to death in the last five years,” says Kanishka Gupta, a literary agent who has helped authors like Shatrujeet Nath publish fiction in this category. “It has come to a saturation point. Indian fiction based on nuclear attacks, the Taliban or India-Pakistan has been extensively covered in the 10,000-50,000 words category. What Indian publishers are now looking at is similar set ups in Maoists belts, for example something based in Assam. Or something to do with insurgency,” says Gupta.

Bookstore cash registers are ringing with joy. “The spy thrillers segment is the second bestselling in our store when it comes to Indian fiction. Sales run very close to those of mythological fiction,” says Mithilesh Singh, who has been working at a popular New Delhi bookstore, Bahri Sons, for more than 17 years.

“The Americans had no clue that the man they were spending millions of dollars trying to find was safe and sound, right under their very noses.”

— From Salim Must Die, by Mukul Deva

His debut attempt, Lashkar, was the first Indian military thriller to catch attention in India and abroad. It placed Osama bin Laden in a garrison town in Pakistan. In a subsequent fictional thriller, Salim Must Die, he foretold Bin Laden’s capture by US Special Forces.

“Lashkar was born out of anger on the day of the bomb blasts in Sarojini Nagar in New Delhi. I started writing it that evening. I wanted to paint a real picture of state-sponsored terrorism for my readers,” says Deva in a Skype interview.

Lashkar was immediately picked up by HarperCollins and went on to become a bestseller. Other Deva thrillers that followed are Tanzeem (2011), which eerily created a scene similar to the 26/11 attacks on Mumbai before that event actually took place, and RIP (Resurgent Indian Patriots), in which a team of Special Forces turns vigilante and goes on a killing spree, eliminating corrupt government officials.

The last five years have seen a marked growth in the number of Indian authors writing in this genre. Apart from Shatrujeet and Deva, there is PR Ganpathy (The Anza Deception), Sami Ahmed Khan (Red Jihad), Aroon Raman (The Shadow Throne), Abhisar Sharma (The Edge of the Machete), and Badrinath Nuggehalli (Clear Line of Fire), to name a few. And there’s more coming. Clark Prasad’s Baramulla Bomber will be released in the next few months, as will sequels from some of the authors mentioned above.

Not all the authors in this category are from military backgrounds, like Deva (who quit the Army in 1996) or Nuggehalli (the son of an Army officer). People from all walks of life are throwing their hats in the ring. Shatrujeet Nath is a former business journalist, Aroon Raman has an MBA from Wharton, Sami Ahmad Khan is a doctoral candidate at JNU, PR Ganpathy is a management executive, and Abhisar Sharma is a TV journalist. Many of them have grown up in the shadow of the Cold War, the source of many fascinating thrillers.

“What we grew up reading is now inspiring some of us to tell similar narratives, set in a more familiar and relevant context—the Indo-Pak dynamic. Instances like the 9/11 attacks on the US and our own 26/11 have cemented Pakistan’s association with terror and subterfuge, emboldening us to write and helping us find a more receptive audience for our stories,” says Nath.

Unlike literary agent Gupta, both Nath and Deva think that this sub- genre is still nascent. “So far, we have only picked the low-hanging fruit— fanatical jihadis, war-minded ISI bosses, rogue elements of the state on both sides of the border, the threat of nuclear holocaust… The Indo-Pak terrain is richly layered with intrigue, and if we dig deeper we could find many interesting stories to tell. How deep we choose to dig is up to us,” says Nath.

And what do readers of this genre have to say?

“There is a huge sense of pride when I read a well-crafted story by an Indian author, especially a thriller, which needs a different sort of talent to be able to stay ahead of readers without trying to get smarter than them,” says Deepa Ramkrishnan, a freelance journalist and avid reader.

Another die-hard fan of this genre is Aseem Rastogi, an independent blogger, who says, “The characters, the concept, the way the narrative is structured— all have been quite awesome and have kept the reader guessing. Honestly, we as a country are located in one of the most dangerous parts of the world. Terrorism, violence, gang wars, the underworld are some of the things we keep hearing about day in and day out. This reality is being mixed with fiction, serving up a heady and deadly cocktail that readers are enjoying.”

Ahmed Faiyaz of Grey Oak publishers says: “I believe military thrillers or books slotted as spy thrillers have been a popular genre in the West. In India, the reading audience has been lapping up the works of John le Carré, Tom Clancy, Jack Higgins, Harold Coyle, Ken Follet and many others for years, while stories set in India are beginning to gain popularity.”

Having spent more than 16 years in the Indian Army, and then two years as a defence journalist, Deva is big on “the technical construct” in his novels. The plot is always set against real incidents, just like pre- and post-Cold War thrillers. He grew up reading Ken Follett, James Hadley Chase and Harold Robbins, but in the last seven years, he hasn’t read any thrillers in an attempt to clear his head’s clutter. “I read young adult fiction like the Harry Potter series these days,” he says. Going by the predictive power of his text, maybe he has avid R&AW readers too.