As the Name Suggests

Lost and Found by CP Surendran will lose the reader in its maze of characters and find him again. 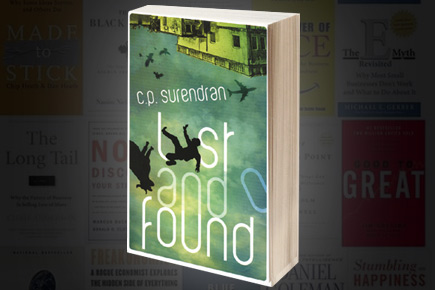 Lost and Found by CP Surendran will lose the reader in its maze of characters and find him again.


There are journalists and there are writerly journalists. Their work has a literary sound. Their ambitions go beyond ascending the newsroom hierarchy. They seek to touch the higher sky of writing books. Things that others do not see are apparent to them. Most importantly, they possess a sharp understanding of human nature. CP Surendran, published poet, author and senior newspaperman, belongs to this tribe.

But Surendran’s new novel, Lost and Found, does not always sound like him. Half of it meets expectations, with inspired and original words. The other half, though, lacks sophistication.

It is the reviewer’s duty to the reader to provide a brief synopsis of the plot. It is based on a summary of the plot, after all, that the reader decides whether to invest faith in the book.

Lakshmi, one of the main characters in the story, is 19 when sex happens to her. She is alone with a young male stranger in a dark, deserted Mumbai local. It is seduction or rape, depending upon your viewpoint. She delivers twins. Since the babies are illegitimate, she gives them away.

One baby is offered, at a Mumbai signal, to a childless woman from Pakistan when she is on her way to the airport for the flight back home. The other is taken away when Lakshmi leaves it at a temple and goes in search of tea. The Pakistan baby becomes Salim, a ‘jihadi’. The temple baby grows into Nirmal. Salim leads a 26/11 style attack on Mumbai. At one point in the attack, he takes hostages. Here, an entertaining climax begins to unravel.

One is lenient about the plot. It is an extremely unlikely story, but not an impossible one. Its implausibility seems deliberate, a send-up on Bollywood movies. Besides, it is an imaginative story.

There are a few other complaints, though. Firstly, Lakshmi’s pregnancy phase is conveniently explained away in a couple of pages. She, a literate middle-class Mumbai girl, simply runs away from her parents’ home and goes to Goa where she sells trinkets on beaches till she starts showing. When it is time, she gets herself admitted to a hospital, and delivers.

One’s doubts about the plausibility of this may seem contradictory to one’s acceptance of the implausibility of the main premise. Stories, however, can take liberties at a macro level, but at the micro level, they must be watertight.

The second gripe is that there are too many characters and story strands. Third, a few character names sound made up and some of the dialogues don’t work. Also, Surendran could have opted for straight spelling, instead of phonetic versions, for every line spoken by Githaa, Lakshmi’s neighbour. (‘Voh mhai god.’ , ‘Faargiv and faarget.’) These are minor things in the overall analysis, but they grate.

That said, the book’s coolest line is from dialogue. Salim, threatening Lakshmi and her friend, says, “If you talk again, you won’t talk again.”

Lost and Found is at its best when the narrator speaks. Some of the descriptions and observations are spot on. ‘The chic ambience eases people into thinking the best of their future,’ Surendran writes of a restaurant. Of the farther local train stations of Bombay, as seen at night, he writes, ‘In the distance, hills loom like massive prehistoric animals.’ These moments and the climax, which will leave you smiling as if you had just witnessed a magic trick, redeem the book. And for media insiders, there is a special jibe: a parody of some of the scheming jokers who hold powerful positions in the industry, only to slip up big time and finally land on their bums.