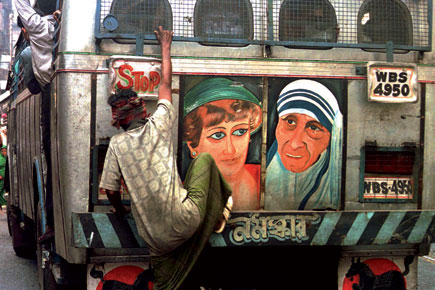 
As a postgraduate student, I discovered two books in the university library almost simultaneously: Amit Chaudhuri’s first novel, A Strange and Sublime Address, and Karl Miller’s Doubles: A Study in Literary History. And in the way books and their accidental discoveries influence our reading careers, I discovered a connection between the two. ‘I should like to thank Karl Miller for his early encouragement, and the London Review of Books, in which Chapter Seven of A Strange and Sublime Address first appeared’: this was how Chaudhuri’s ‘Acknowledgements’ began. Reading Chaudhuri’s most recent book, Calcutta: Two Years in the City, it was that fortuitous moment of discovery that I found myself going back to.

For it is the ‘double’, the ‘two’ in the subtitle of Chaudhuri’s book, that comes back to you like epiphanies in instalments as you read it. ‘Fitzgerald once defined the writer as one who can harbour two incompatible thoughts in the head simultaneously,’ Chaudhuri declares about 50 pages into the book. Chaudhuri’s Calcutta is an investment in the ‘two’. Quoting Edward Said, he writes, ‘Exiles are aware of at least two [cultures], and this plurality of vision gives rise to an awareness of simultaneous dimensions, an awareness that … is contrapuntal’.

Calcutta, the space and the place, is, like Chaudhuri and Fitzgerald’s writer, capable of holding ‘two incompatible’ things. Calcutta is now Chaudhuri’s ‘home’, and yet it is not quite that, for it comes with another twosome annotation provided by his mother: karmasthan and bashasthan, the place where one works and the place where one lives. Does that make a city a home? One of the many binaries in this marvellous book derives from home: the home and the homeless (‘they didn’t actually belong to Park Street … as they don’t have a home, you presume home is where they are’), the basti and Hiland Park, home and holiday (‘My holidays in Calcutta were similar to my account of inhabiting a poem, in that I didn’t come to know a great deal more during them; in fact, Calcutta, being a break from school, was, for me, a break from knowing’), as also home and nursing home. Every word, every thought in this book is there because Chaudhuri orchestrates ideas into contrapuntality. In the seemingly innocuous home/nursing home bind, the name ‘Naba Jiban Nursing Home’ (‘new life’, unwittingly echoing the resurgent naba jagaran) gives him an opportunity to take readers through the history of the city, from the Bengal Renaissance to what the city—‘the other Calcutta’, the ‘environs in which all the cultural innovations of the Bengal Renaissance took place’—has become today.

It moves in pairs, even when you least expect it, as in my favourite chapter, ‘Italians Abroad’, in which Italian and Chinese chefs find themselves compelled to cook Cuisine Calcutta, dishes that have undergone ‘kormaisation’ (Chaudhuri’s version of Cocacolonisation), and where chef Davide Cananzi, ‘Sardinia-born, bred in Toscana’, makes Chaudhuri invoke ‘William Jones’s late-eighteenth-century mission… to educate Western scholarship about Indian antiquity and the Sanskritic inheritance’. ‘Cananzi, two hundred years later, was neither intent on giving Bengal to Bengalis … he was engaged in a more resistant task … the unnoticed business of bringing Italy to Bengal’. But why them alone, when there are people like Samir Mukherjee, one half of an ‘Ingabanga’ couple, who is Calcuttan only in name? ‘I had the sense of a man in a very particular kind of space: living in Calcutta, but a Calcutta he saw relatively little of, a city reported about in the morning newspaper.’

Or those who live in Hiland Park: ‘A symbol of sophistication, a mark of dignity, Hiland Sapphire certainly is the residence of choice for the manor born. By becoming a microcosm, by being self-sufficient, they fulfil a fantasy that many Calcuttans have secretly had for years: to live in the city without in any way depending on it, or being beholden to it, or subject to its vagaries.’

This is exactly the same impulse that makes chef Lian Yu Li of Nanjing happy in Calcutta, he who ‘comes to the Taj, goes to the kitchen, then leaves… for the Taj apartments’, or makes Nigerian footballers say they love the South City mall when asked if they like Calcutta. Chaudhuri’s narrative is laced with references to exiles and émigrés, of cities and cultures, but Calcutta’s new ‘citizens’, his most powerful political category in the book, are not only the ‘homeless’ but also these people, native expatriates, who are tenants of Hotel Calcutta.

The city is constructed as a hologram of memory and forgetting, Chaudhuri’s self-confessed nostalgia for the Calcutta of his childhood posited against his father’s vascular dementia, the personal inflections of remembering and ‘stealthy signs of dementia’ acquiring political connotations. After all, ‘How old is the city?’ is a political question. Chaudhuri answers this by bringing his 90-year-old father and 13-year-old daughter into the frame, both becoming, in his words, each other’s ‘chowkidar’, the city’s citizens, its protectors. So while his ‘historical moment’ arranges itself into a 1757-2011 pair, the two dates signifying the transfers of power in Bengal—the first from Siraj ud-Daulah to the East India Company, the second from the Left to the Trinamool Congress—Chaudhuri reminds us, like only he can, how Nandigram and Singur are the new Plassey, and how that rural, once also Naxalbari, has always been the eyebrow to Calcutta’s eye. ‘Could a city be a village and a city at once?’

And there are other pushes and pulls to be found in the affectionate pairs that Chaudhuri sets up between the ‘living city’ and the ‘dying city’: between those who sleep and the sleepless, for instance. As we move through the city, we are made privy to assorted subsets of sleep and sleeplessness. In the hands of a lesser writer, this would turn into a lax joke about Calcutta’s lethargy, but Chaudhuri has been setting it up in increments in the narrative—from ‘Yes, I think it’s true that some pharmacies … take a long siesta in Calcutta’ to ‘Right next to Nagendra’s ironing stand were two figures asleep on string beds… in the shroud-like form of rural Indian sleepers’—so that when he draws attention to the Kolkata Knight Riders non-Calcuttan owner Shah Rukh Khan’s extraordinary energy with ‘he bounced back early the next day without any perceived need or desire for sleep’, the reader is almost tempted to scream ‘I Spy’.

‘Where the terrific energy of the free market and its players comes from has long troubled those who’ve viewed it from the sidelines.’ It is impossible not to view Calcutta, always on the sidelines, with affection after this, this city which, in its ‘Hindu’ ‘slowness, dilatoriness and vacancy’ is caught between the restless energy of ‘Nothing happens’ and what novelist Akhil Sharma tells Chaudhuri: “You feel that something happened here.”

So with madness. One of the private joys of reading Chaudhuri is in discovering these trails he sets up, Hansel and Gretel’s breadcrumbs as it were. “We may be beggars, but we aren’t mad,” says the homeless Khurima. Other mentions of madness follow, as if the city, with its unpredictability and recent near-rejection of rationality (with Bengal’s Chief Minister being called a madwoman in colloquial political debates in the extra-legal courtrooms of national television), is actually better imagined this way: ‘I saw the best minds of my generation destroyed by madness,’ Chaudhuri quotes Ginsberg while talking about Naxals in the late 1960s and early 1970s. “You can call me mataal,” Mohammed Khan tells Chaudhuri, confirming that he would vote for the Trinamool in the 2011 polls. On the next page, there appears a reference to ‘Mamata Banerjee’s endemic mood swings, her violent unpredictability of policy’. ‘The mad led by the blind: that’s how a well-known city academic, Professor Sibaji Bandyopadhyay, quoting King Lear, once mildly described to me Calcutta’s middle-class’. In his mentions of madness, Chaudhuri emplots a parallel map of the city, taking as signposts the Chief Minister (thus the government), a house help, the middle-class, an Ingabanga couple and a man who lives on the street, thus constructing a psycho-ethnography, but with an ease and cunning that is a lesson in itself for social scientists.

‘This was another feature of this city’s modernity: the importance—for no discernible reason—of looking,’ writes Chaudhuri. In South City, he notes mall rats ‘studying the lower levels, or the people ascending apparition-like, on the escalator’. If Paris needed flaneuring, Calcutta demands a career in looking. ‘Charulata, in Satyajit Ray’s eponymous film, diverts herself in the afternoon in an immense nineteenth century mansion in North Calcutta by opening the slats of the windows and spying on passers-by through binoculars. To be unseen, to look out at the world: for the artist, this is a prized privilege, and in the late nineteenth century, Calcutta began to feel those possibilities—of being at once known and invisible—precipitously,’ Chaudhuri writes.

This book, which gives us a ‘self- renewing way of seeing’ Calcutta, is a gift of modernity: it will remain ‘perennially new’.