A Matter of Genius

Scientist CNR Rao always found a way out of adversity 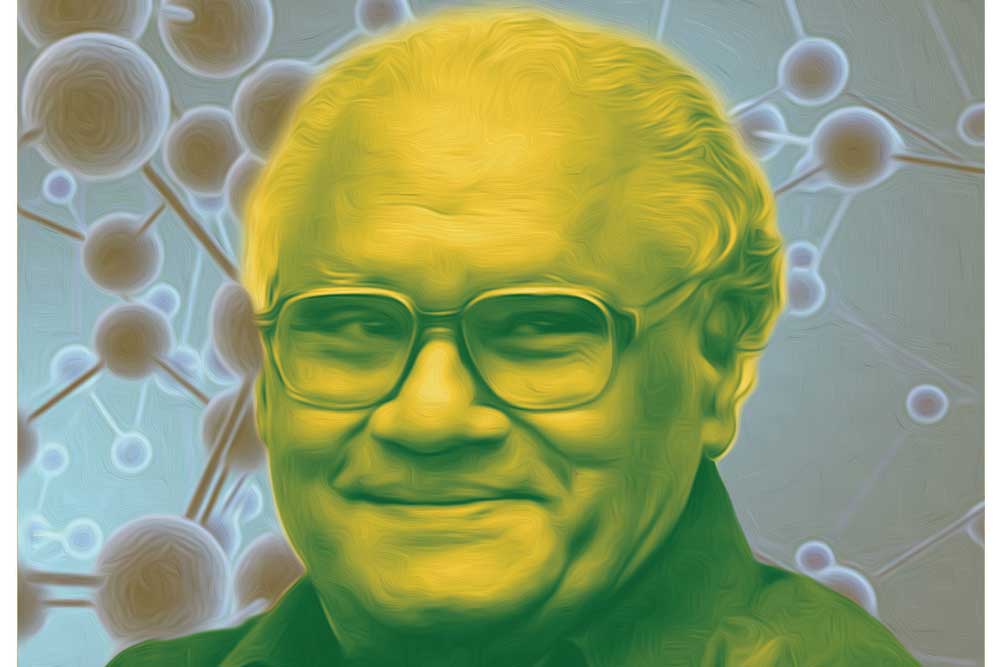 HERBERT BROWN, A winner of the Nobel Prize and one of the 20th-century giants in Chemistry, taught Professor CNR Rao while he was a doctoral student at Purdue University. Brown once said a grain of pollen becomes a tree and a tree spreads into a forest, and a forest into a continent. The new autobiography , A Life in Science, by Professor CNR Rao, a recipient of the Bharat Ratna, is a perfect example of a man who created a continent from a grain of pollen. The book also offers a rare glimpse of how science has blossomed in post-independent India. CNR also throws insight on the development and excellence of the institutions that he headed. He had a long stint as the chairman of the Science Advisory Council to the Prime Minister and has been instrumental in setting up many institutes, including the IISERs.

CNR was born as Chintamani Nagesh Ramachandra Rao on the 30th of June, 1934, to Nagesh Rao and Nagamma in Basavangudi in Bangalore. CNR remembers the ‘electrifying’ impact that the visit of CV Raman, the icon of Indian science, had on him while he was still a student in Basavangudi. He mentions that the lecture by CV Raman on Madam Curie inspired him to become a scientist. After graduating from Central College in Bangalore, CNR secured the first rank in a Master’s in Chemistry from the University of Banaras in 1953. He credits his stay in Banaras and the tutelage of his teachers at the University for making him a well-rounded researcher. The rarefied ambience of the city also developed in him a keen love for music. Are there any links between scientific success and art? It is possible that imagination is correlated with various creative activities outside science , and do the lives of many great scientists give credence to this proposal? In Banaras, he chanced upon the book The Nature of The Chemical Bond by another great scientist and Nobel laureate Linus Pauling, who also shaped CNR’s research life. Pauling’s book made CNR curious about the structural peculiarities of molecules in matter. He recounts how he made a third-class train journey to Hyderabad during his brief tenure in IIT Kharagpur to meet his idol Pauling. However, his desire was quashed as the American government refused to let Pauling attend the Indian Science Congress under the assumption that he was a communist.

At the University of Purdue, where he was pursuing a doctorate, his colleagues in the Department of Chemistry were stalwarts like Eugene Lieber, Herbert Brown, and Robert Livingston. He was also finally able to meet his idol, Pauling. By the time he earned his Doctorate in Chemical Physics, in 1958, CNR had already authored several papers and established himself as a credible research scientist. During his time at Purdue, CNR discovered his interest in Solid State Chemistry which would later become one of his primary areas of research. After Purdue, he went on to do his post-doctoral research at California University. Here, he worked with GN Luis, who is known as the father of modern chemistry, and who had a tragic death inhaling hydrogen cyanide in his lab. Although he never got a Nobel Prize, several of Luis’ students won the same. In fact, Pauling has dedicated his book on chemical bonds to Luis. CNR recollects the heated debates between Pauling and Robert Oppenheimer who spearheaded the research on atomic bombs. Interestingly, however, when Oppenheimer was branded a communist by the American establishment, Pauling was among the few who spoke in his favour. Finally, in 1959, CNR returned to India with dreams of research in the chemistry of materials.

Although Indian Institute of Science (IISc) offered him the post of a lecturer, it did not provide the basic necessities needed for his research. CNR also had to bear the cynicism of his colleagues. But it is in the way he dealt with all these adversities that differentiates him from others. Instead of complaining he chose to excel intellectually by publishing his first book titled Ultraviolet and Visible Spectroscopy. There is a metaphorical irony here that CNR published his analysis on light in order to break through the darkness that prevailed around him. Unlike an average scientist, who might sit back and assign blame to the system, CNR had a penchant to leap over the shortcomings of the system.

In course of time, CNR’s name was mentioned along with the contemporary stars of the scientific sphere like Satish Dhawan, Vikram Sarabhai, GN Ramachandran, MGK Menon, Raja Ramanna among others. With diligence and focus, CNR secured the next feather in his cap as an associate professor in the Chemistry Department at IIT Kanpur in 1963.

CNR also proved his credentials in the international sphere of scientific research at Oxford and Cambridge. In 1976, he moved back to IISc in Bangalore and was inducted into the prestigious Royal Society. At IISc, he laid the groundwork for a research department in Solid State Chemistry.

ALTHOUGH AWARDS, fellowships, and accolades from peers indicate a scientist’s success, the true measure is when their work is cited by future scientists. The works of CV Raman, Satyendra Nath Bose, and Meghnad Saha are still revered because they have the quality that transcends the test of time. CNR’s work is equally superior and thousands of his papers have been cited repeatedly. CNR always stresses the importance of creativity (and of course ‘imagination’, the god-like faculty that helps talented men create things of lasting beauty) in science rather than formal education. He often talks about the genius of those like Faraday and Michelangelo. The common theme in all these great people’s work, including CNR’s, is not just talent alone, but relentless hard work.

CNR remembers a time when Chemistry was synonymous with the structure of asbestos, cement and steel. It was only when he went to Purdue that he discovered the intricacies and vastness of chemical bonds. In the 1950s there wasn’t much study done on Solid State Chemistry. Its real growth only started in the 60s. The peculiarities of the structural composition of matter are currently being studied at the atomic and subatomic levels under the branch called Nanotechnology. (‘Nano’ is one billionth of a metre.) Nanotechnology is a confluence of several branches of science—Chemistry, Mathematics and Biology. It plays a key role in ground- breaking developments in electronics, automobile, computer and energy industries as well as in the medical field.

Equally important to note in this book are his observations on Indian science and how it should be conducted. He opines that the excessive importance given to information technology, banking and management studies in India will be detrimental to other fields. The Government is investing in atomic and space research, while other areas of science are not getting equal importance. He is critical of excessive bureaucracy in scientific institutes. A word of advice from him to practising scientists is not to get enamoured by administrative positions but focus on their work. He believes that even though the current scientific arena is highly competitive, a good percentage of scientists are averse to hard work. On another note, the research area that a scientist chooses dictates her/his success to a large extent. If a scientist chooses a popular area of research, all s/he can do is churn out some average publications as opposed to creating a real impact.

CNR warns us about India’s inability to sustain the quality of its research institutions. It is imperative that senior scientists become role models for the younger generation. Students who have been trained by him will vouch for his influence as a mentor.

Coming back to the words of Herbert Brown, about how a grain of pollen grows into a tree, a tree grows into a forest, and a forest into a continent, scientific research starts from a single thought. Delving into this thought could lead to a discovery that transforms life. This happens only to a select few. Nature is like an elusive lover. It takes a persevering mind and true grit to truly win her over. Even in his golden age, CNR has not lost his passion for nature and science. Somewhere in a corner of Jawaharlal Nehru Centre, the sanctuary of science that he created, one can still find him pursuing the endless horizon of excellence.

A Life in Science is a grand exposition of the life of an extraordinary man who developed an obsession with science and how that passion helped him scale the heights of glory. The book ends by paraphrasing an invocation from Ustad Bismillah Khan, the virtuoso musician, ‘Oh lord, keep me in the world of science, till the end.’ Ustad longed to live in the world of music forever. Passion seems to be the common thread that runs through these worlds—science and music.