A Book of Ideas

A novel about the Holocaust that says a lot without even seeming to. 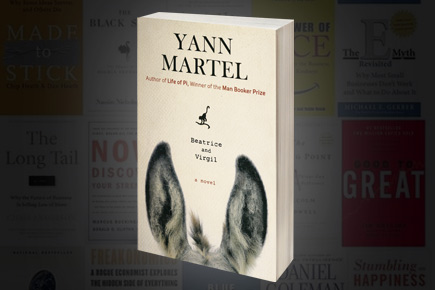 A novel about the Holocaust that says a lot without even seeming to.


There is no story really in Yann Martel’s latest novel. ‘What is the book about?’ is even a recurring question within this very novel. This book really is an exploration of the idea of why, so many decades after the Holocaust, we are still apprehensive about rendering it into fiction. An event so widely documented and committed to memory, and yet, points out Henry—the protagonist of the novel, a writer whose concerns and life reflect that of Martel himself—so little fiction based on the near extermination of Jews. There’s almost a fear that deviating from historical ‘truth’, so to say, would trivialise the horrors of that period.

Inaction spans most of the novel, a large part of which recounts two conversations. The first is between Henry and a reader of his work, a humourless taxidermist, who seeks his help in writing a play. They speak in the taxidermist’s workshop, surrounded by figures of animals, skinned, treated, mounted, and saved from the anonymity of death. And the second Beckettesque conversation, under a solitary tree, is between Beatrice and Virgil—the two characters, a donkey and a howler monkey, in the play the taxidermist has been attempting to complete for 60 odd years. They speak of memories of lost pleasures, and the horrors they’ve faced so that these memories are not entirely lost.

Martel’s gift lies in being able to create such intense drama in nothing but two people reading from bits of paper, a book about the Holocaust that is not even set in those years. For as Martel’s character admits: ‘My story has no story. It rests on the fact of murder.’