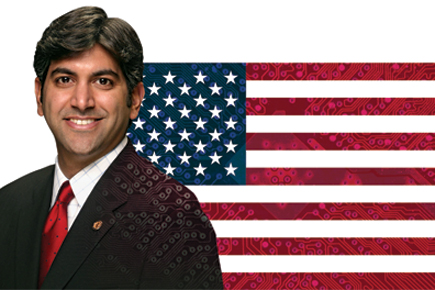 As an ambassador of change, Barack Obama harnessed technology to reach out to voters in innovative and powerful ways last year. As we all saw, he won the Presidential election handsomely. It’s no wonder that change continues to be a central theme of President Obama’s Administration. So it is that Silicon Valley technologists and entrepreneurs have been watching his moves keenly. For the first time in the US, the Administration has the post of a Chief Technology Officer (CTO).

Two months ago, President Obama named Aneesh Chopra, 37, as his CTO. Before this, Chopra was Secretary of Technology for Virginia, where he won accolades for implementing innovative and practical solutions.

“It is impressive, given all the demands on Obama, that he chose to spend time establishing and staffing the role of CTO,” says Avery Lyford, managing director of Signal Lake Ventures of Silicon Valley.

Change seems an integral part of Chopra’s own strategy to help achieve President Obama’s policies on healthcare, education and energy, as he said in his first major address since taking charge as CTO—organised by the Churchill Club at the Computer History Museum in Silicon Valley, last week. How can technology be made useful and relevant to people at large is one challenge that Chopra is focusing on with laser-sharp dedication. He began with the instance of his own tech-savvy self, wondering aloud why he finds it easy to use technology at a personal level, but is unable to do so at the government level. His talk was studded with examples of what the government is doing to update websites or deploy practical technology solutions.

Apparently, when Chopra first went to the White House, he discovered they were using an ancient web browser. This issue was being addressed, he said. Or, how come the Department of Immigration’s website is not user friendly? Or how can the process of working with the government be changed? The US Government’s annual spend on infotech is $75 billion, and that means there is plenty of opportunity for any companies and startups to do business with the Federal Government, he pointed out. It is this gap that Chopra wants to bridge, and work has already begun on several initiatives in some of these areas. For instance, the Department of Immigration’s website is being totally revamped at zero cost, as he put it, and the goal is to make information easily available to those who apply for US visas, green cards or citizenship. Since transparency is one of the cornerstones of the Obama Administration, there is a website on which anyone can track how the US Government is spending its infotech budget.

But what is Chopra’s actual role in governance and what are his priorities? Speaking to Open, Chopra ticks off three main things that he is responsible for as CTO. First is to create the necessary building blocks for innovation and an appropriate policy framework for investment. Second is applying innovation for America’s national priorities in healthcare, energy and education. Third is to help the Federal Government embrace the spirit of open government and innovation in the way it performs its operations. A major priority of President Obama is to reform America’s healthcare system, and technology has a key role in expanding coverage while also reducing cost.

The importance of Chopra’s mission is not lost on the movers and shakers of Silicon Valley. That he “made a visit to Silicon Valley within his first 90 days in office says a lot about the importance of the Valley to this Administration”, says Lyford, adding, “Silicon Valley has realised that tech needs to pay attention to Washington DC. The size of the industry and the impact on other industries dictates a deeper focus on Washington DC. At the same time, Washington DC can see that technology is the key to national competitiveness and sustainable growth.”

Chopra himself declared that his visit to the museum was the first of many trips that he plans to make to Silicon Valley, and hoped to apply the spirit of innovation to national policy. The basic idea, as he put it, is learning how to “tap into the reservoir of talent for our shared interest”.

America’s just appointed CTO is no stranger to Silicon Valley’s innovative and can-do culture, having worked with startups from this region. This is perhaps why he recognises the importance of novel operational methods. Public-private partnerships, especially with Silicon Valley companies, for example, could go a long way in achieving the broad national objectives that cannot be achieved so long as government processes function the way they always have.

During his talk, Chopra shared his experience of having worked with a Silicon Valley startup, FlexBooks. It’s an open-content, web-based collaborative model by which high school students and teachers can create customised science and maths content to supplement existing text books. Murugan Pal, co-founder of FlexBooks, recalls being amazed by the speed with which Chopra moved once he learnt of their company’s open source solution for educators. “Primarily, he is a champion of private-public partnership,” says Pal. “He was able to marry Virginia’s internal requirement with what we had to offer,” he adds. “He gets things implemented quickly and in the right way without alienating anyone.”

Perhaps it is the same spirit of getting things done swiftly and inclusively that is shaping Chopra’s style of functioning as a CTO. He is keen on working with Silicon Valley companies and wants them to create solutions and also look for government investments. “I am listening, listening, listening,” Chopra responds, when asked about his three-point agenda for Silicon Valley. His two-day whistle stop tour in Silicon Valley included dozens of meetings with entrepreneurs, venture capitalists and technologists, and by the sound of it, these left him eager to transfuse some of the Valley’s derring-do to Washington DC.

“What is nice to hear is they are taking some of the principles that Silicon Valley was founded on and [want to] bake that into the government,” says Salim Ismail, executive director of Singularity University, a startup in the Valley.

But what about the cultural difference between the epicentre of innovation and that of politics? Can Silicon Valley and Washington DC ever look at technology from the same angle? “Cultural gaps are only as wide as people make them,” says Lyford, “When both sides are motivated, gaps can be closed quickly.” And he is right. “One big difference is that both Silicon Valley and Washington DC know that they need each other,” he says.

Lyford’s thoughts are echoed by Karen Tucker, CEO of Churchill Club, “Our technologies, processes and diverse culture offer Washington the means to solve intractable problems in new ways.” It’s a collaborative call that won’t be ignored. For, everyone has a stake in it.