The Mind of a Self-Immolator

On 22 March, Jamphel Yeshi, a 27-year-old Tibetan, burnt himself to death in protest against Chinese oppression in Tibet. He had decided on it 10 days ago. What happened in between? 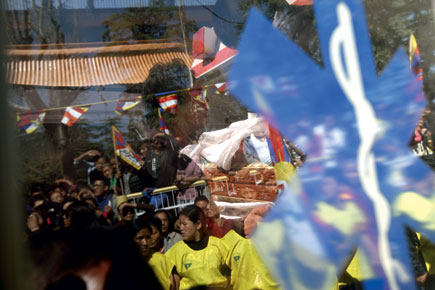 On 22 March, Jamphel Yeshi, a 27-year-old Tibetan, burnt himself to death in protest against Chinese oppression in Tibet. He had decided on it 10 days ago.


“It was like any other demonstration. We had gathered at Jantar Mantar. We were shouting slogans and raising banners. And then, right in front of me, I saw a burning man, running and screaming something I could not understand. It was like flames were sprouting from his body. The smell of burning flesh was everywhere. And then I saw… it was Jamphel Yeshi” —Tashi, a resident of the Tibetan Refugee Colony in Majnu ka Tila

Like the secret Platform 9-3/4 at King’s Cross station in the Harry Potter books, the gate of the Tibetan Refugee Colony in Delhi’s Majnu ka Tila transports you to a strange land. Suddenly, the large and noisy world of Delhi is transformed into a magical little Lhasa, where narrow lanes crisscross each other, Tibetan music filters out of windows, and the strong smell of chhang, the Tibetan beer, in various stages of fermentation, greets you.

But it is different today. The music is muted, the Tibetan establishments are shuttered. It is a day of mourning and even the colourful prayer flags seem heavy with gloom. The locality is estimated to have at least 500 families. Large numbers of them have turned up at the gompa (temple) square to offer prayers and make idle conversation. All prayers and conversations have a common thread—Jamphel Yeshi.

Four days after the 27-year-old burnt himself on 26 March, and two days after his death, residents speak of his great sacrifice, but struggle to associate the photo of the man in flames with the person they knew. He is no longer Jamphel or Jashe, as his close friends called him, but Jamphel Yeshila (la, like ji in Hindi, is a suffix for names to accord them respect). Some remember him as a temple hand, others as a quiet, good-humoured guy who read books about Tibetan history and spirituality, and his roommates, as a fine fellow who wouldn’t touch alcohol or cigarettes. But no one seems to have had an inkling of his state of mind—how he had resolved to kill himself days ahead of the act itself. A letter he had left behind was found after the immolation. It was dated 16 March, a full 10 days before he burnt himself. Throughout those days he remained in good spirits and did nothing to betray his decision. On the morning before burning himself, he even cleaned his bed and folded his blankets.

Yeshi shared a one-room tenement in the colony with many others. Two other people, besides him, lived here permanently; some five or six would move in and out. The house can be reached through a series of narrow bylanes that snake around large buildings and drains you must jump across. Located at the far end of the colony, this part of the locality almost kisses the banks of the River Yamuna. The house is mostly bare. There is a TV set with a DVD player, and CDs of Tibetan songs line a wall. Five mattresses are laid out across the room, with a few more piled in one corner for the itinerants. Yeshi slept at one end of the room. The wall next to his bedding bears posters of a number of Tibetan high lamas. The largest one is that of the Dalai Lama, which he got when he visited Bodh Gaya during the Dalai Lama’s Kalachakra sermons in January earlier this year. On a facing wall stands a solitary cupboard with a photograph: of Tsewang Norbu, the 29-year-old monk from Nyatso monastery in Tawu, Tibet, who torched himself last year. Yeshi was a native of Tawu, and according to his roommates, he looked up to Norbu “as a national hero from my area”.

Even the day before the eventful protest march, he seemed ‘normal.’ On 25 March, he got up at 8 o’clock as always, and spent time in the gompa. He reportedly sought out his cousin Tashi Lobgyal during the day, and told him there was around Rs 22,000 stashed under his bedding, just in case he needed money. “It was a regular day. He met me around 7 pm, outside the gompa, where he donated some money. I was going to spend the night elsewhere, so I told him I’d call the next day and join him at the protest. But he asked me not to call. He said I might not be able to get through. I found that strange, but did not say anything,” says Sonam Wangyal, Yeshi’s 32-year-old cousin and roommate.

He slept by 10 pm that night after having a bowlful of thukpa, a Tibetan dish of noodle broth. He was reportedly in such good spirits that night that he even removed his T-shirt and posed for photographs. The images of a smiling Yeshi, showing off his muscles, are still on his roommate Dorjee Rabten’s camera. He was up earlier than usual the next day, and by 7 am, while everyone else in the house was still asleep, he was ready to leave, says Tashi Thendu, a friend who was passing by. Even though he knew he would not return, he had cleaned his bed and folded his blankets. He had a  breakfast of bread and tea with Thendu, but did not join his friends at the protest march. He left for Jantar Mantar later with a group of neighbours on a bus arranged by a local chapter of the Tibetan Youth Congress, of which he was a member. He was reportedly carrying a large bag.

As news of his immolation spread, one of his friends at a local organisation he volunteered for, 36-year-old Jampha

Damdum, along with two other youths from the area, searched Yeshi’s house

to see if he had left a note behind. Two identical notes in Tibetan, handwritten and signed by Yeshi, were found, one

under his bedding, and another in his suitcase. The letter called for ‘loyalty’ among Tibetans, and urged them to fight for Tibet. It also said that the examples

One can only surmise what his state

of mind might have been  when he decided to take such an extreme step. According to close friends, his ideas on the ‘Tibet issue’ had crystallised over time. He had slowly changed from being a carefree youngster who was against China’s occupation of Tibet to someone who spoke on the subject through the day. He was greatly affected by the increasing number of self-immolations in Tibet. A few months earlier, he had told Sangay, the gompa’s caretaker who only goes by his first name, that when an individual burns himself for the freedom of his country, no one should try to stop him. “‘The immolator’s mind has been made up. He is not killing himself for selfish ends but for the greater good’, he told me,” says Sangay. According to Wangyal, even in late 2010, Yeshi had been found with a large jerry can of kerosene in his house. There was a protest march in Delhi and he reportedly wanted to burn himself as a form of protest. He was talked out of it then by his cousin.

His was beyond doubt an act of sacrifice, to draw attention to the Chinese brutality in Tibet at a time when world leaders and much of the media have ignored the wave of unrest in the region. But what leads a young man, now free, to commit such an act of violence on himself? The clues to this lie as much in the space Yeshi inhabited as in what he said.

Even now, across the area, posters implore Tibetans to turn up for the 26 March protests. There are also large banners with photographs of the many Tibetans who immolated themselves. These photographs are also there in the gompa square—where Yeshi spent large chunks of time—reminding residents of the sacrifices of those in Tibet. Also, after studying in Dharamshala for over three years and completing a three-month computer course in Delhi, Yeshi was mostly unemployed. He was almost always alone. On the rare occasions when he was with friends, he was quiet. He worked night shifts in a hotel called Potala Guest House for over a year, where he took calls and kept watch. But when the ownership of the hotel changed hands, and it started undergoing reconstruction, Yeshi quit the job. He reportedly told the new owner, Tsewang Rigzing, that there wasn’t any work and it would be wrong of him to continue accepting his salary (of Rs 2,800). Says Jamyang Phintso, his 52-year-old neighbour and the landlord of the house Yeshi occupied, “All day Yeshi stayed in his room. He was reserved. Even when his friends and roommates were around, he did not speak much. He would engage in discussions only when these were about Tibet.”

Yeshi was a native of Tawu in Tibet’s Kham province. The Tibetan dialect spoken here is as harsh as its terrain. It is a region occupied by a Tibetan warrior race: Khampas. Kham has been at the forefront of the current wave of unrest in Tibet. Yeshi was extremely worried about his family—mother and three older brothers, all farmers—in Tawu. He had escaped to India in 2006 and had been unable to speak with them for the past six months. “He would try calling them, but in the past six months, his calls were never answered. This is common in Tibet, where the Chinese often monitor calls from India. He was worried because the Chinese have been cracking down on residents of the region,” says Wangyal.

Still in shock, Kesang Norbhu, Yeshi’s 26-year-old roommate, also considered his best friend, says Yeshi never spoke about his life in Tawu, where he spent his childhood. “He told us his mother had sent him away to India so he could lead a life of freedom. That’s all he would say about his earlier life,” Norbhu says.

Maybe there was nothing worth

mentioning. Or perhaps it was too hard to relive. Maybe even in his new-found life of freedom, he could not free himself of his past.