The Death of Counterculture

Even ten years after 9/11, American popular culture continues to mimic the hollow piety of the political establishment. Granted the honourable exceptions 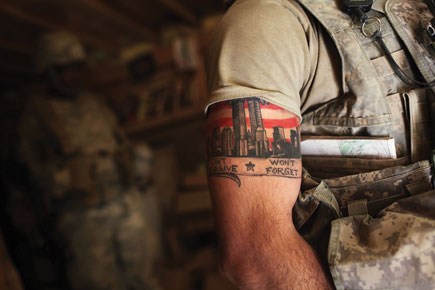 Even ten years after 9/11, American popular culture continues to mimic the hollow piety of the political establishment. Granted the honourable exceptions


Washington DC ~ In one of the poems in his collection Ziggurat, set in New York City and haunted by 9/11, the poet Peter Balakian, borrowing from Emily Dickinson, asks: dare you see a Soul at the White Heat? Art demands that daring from the artist and, importantly, from the reader, the listener, the viewer. The consumption of art is not passive and if empathy is vital for the artist, it is equally vital for the artist’s audience. Ian McEwan, writing a few short days after 9/11, makes the point that if ‘the hijackers had been able to imagine themselves into the thoughts and feelings of the passengers they would have been unable to proceed… Imagining what it is like to be someone other than yourself is at the core of our humanity. It is the essence of compassion, and it is the beginning of morality.’ The imagination, then, indispensable tool of the artist, is something akin to empathy. ‘Among their crimes,’ McEwan writes of the terrorists, ‘was a failure of the imagination.’ The exercise of the imagination, a demonstration of the power of empathy must be the artist’s response, and, through our engagement with the artist’s art, our own response to the terrorist.

Martin Amis wrote in The Guardian several months after the attacks that ‘[a]fter a couple of hours at their desks, on September 12, 2001, all the writers on earth were reluctantly considering a change of occupation.’ He added: ‘A novel is politely known as a work of the imagination; and the imagination, that day, was of course fully commandeered, and to no purpose.’ Since then, Amis has been unable to stop writing about 9/11 in crude fiction and even cruder political analysis, as if his imagination had indeed been commandeered, held hostage by the hijackers. 9/11 defeated such brilliant novelists as Amis, McEwan and John Updike, their novels and stories representing a collective failure of the imagination. Amis, in his short story The Last Days of Muhammad Atta, and Updike, in his novel Terrorist, attempt, quoting from McEwan above, to imagine themselves into the thoughts and feelings of extremists and succeed only in seeking solace in cliché. Both Updike and Amis seem to buy the politician’s casuistry that the Islamist extremist’s contempt for the West is founded on frustration and jealous hatred of the Western lifestyle rather than politics. Even in such widely acclaimed novels as Joseph O’Neill’s Netherland and Ian McEwan’s Saturday, there is, despite the highly politicised settings, no political animus, just weariness or smugness.

Even Don DeLillo’s hyperkinetic style appears enervated in the face of 9/11, enervated by the enormity of individual and personal tragedies. Jonathan Safran Foer, the most lauded young American novelist, offered readers only whimsy and sentimentality in his 2005 novel Extremely Loud and Incredibly Close, with its closing gimmick of a flip-book of pictures restoring a falling man to the top of the World Trade tower. Last year’s blockbuster post-9/11 novel, Jonathan Franzen’s Freedom, was vapid, unwilling to do more than dip its toes in America’s increasingly murky water. The hysterical, undeserved praise for the novel and the Time cover in which a flinty-eyed Franzen was dubbed ‘Great American Novelist’ is proof only of the eagerness of American readers for a novel that gives shape and meaning to their post-9/11 reality and of how few mainstream literary novels have been up to the task. Amy Waldman’s just published novel, The Submission, in which a jury, choosing among anonymously submitted designs for a 9/11 memorial, picks a Muslim architect’s plan as the winner, is perhaps the first compelling fictional alternative to the many outstanding non-fictional accounts of America’s squalid post-9/11 decade.

Perhaps the end of compulsory military service in the early 1970s has meant that educated, upper middle-class literary novelists are no longer equipped to write about American wars waged overseas by mostly working class soldiers. Unlike in Vietnam, only a fraction of American society has borne the terrible brunt of the wars in Afghanistan and Iraq. It’s not a surprise that the novels that actually engage with the post-9/11 world are written by the likes of Mohsin Hamid, Nadeem Aslam, Laila Lalami and Kiran Desai, writers with their faces turned towards the world. Hollywood, unlike most American novelists, has not flinched from politics. A partial, uneven list of politically-minded films, off the top of my head, might include Syriana, The Kingdom, Lions for Lambs, Charlie Wilson’s War, In the Valley of Elah, The Hurt Locker and Green Zone, starring such boldface names as Matt Damon, George Clooney, Julia Roberts, Tom Hanks, Robert Redford, Tom Cruise, Meryl Streep, Susan Sarandon and Philip Seymour Hoffman. Of course, it’s also true that movies dealing with 9/11 or the resulting wars in Afghanistan and Iraq have not been setting any box office records. And that the anger and disillusionment have been most evident and compelling not in these fictional films but in several superb documentaries, none of which, Michael Moore’s Fahrenheit 9/11 apart, have been widely viewed or discussed.

The most affecting, most idiosyncratic tribute to the World Trade Center towers, though, is James Marsh’s 2008 documentary, Man on Wire. Marsh splices together documentary footage and present-day interviews of Philippe Petit and the crew he put together to help him plan and execute an astonishing hour-long walk across a wire strung between the twin towers back in 1974, barely a year after construction had been completed. The mischievous, egotistical Petit is a terrific interviewee and his delight in the sheer lunacy of his stunt transforms the twin towers, even if only for the length of the film, into a site of joy and beauty.

It’s not just filmmakers who have generally proved less reverent than American literary novelists, less afraid to offend. The same is true of graphic novelists, of stand-up comedians, of playwrights, of artists, of musicians, all of whom appear willing to confront the moral elisions and compromises of their government. In the immediate aftermath of 9/11, there was much discussion of a new seriousness, of the end of irony. In Claire Messud’s novel The Emperor’s Children, 9/11 renders a certain kind of frivolous, sneering culture magazine redundant. This impulse for sincerity in a world utterly changed lasted about a month before the US invasion of Afghanistan and later Iraq demanded irony and satire. The proof is in the extraordinary popularity of satirists Jon Stewart and Stephen Colbert, such significant cultural figures in the US now that they can attract tens of thousands to a rally in Washington DC simply to demand a more civil political discourse.

Even 10 years on, despite the hundreds of thousands of deaths in the war on terror (US military casualties alone surpass the number killed when the towers fell), 9/11 is such a holy cow that only a stand-up comedian, a relatively obscure one at that, would dare open his act as David Cross does by saying: “Has that flag-waving, cheerleading, rah-rah bullshit stopped or died down at all?” Cross builds an entire routine around the shallowness and rote piety of post-9/11 American patriotism and shibboleths such as ‘the terrorists hate us because they hate freedom.’ The comedian and social critic George Carlin, who died in 2008, was another who routinely excoriated the war in Iraq (and American patriotism and religiosity and democracy) in his stand-up shows. After 9/11, it appears it has been left to the comedians and satirists, like medieval fools, to speak truth to power.

In the immediate aftermath of 9/11, it must not be forgotten that America was in no mood to listen to criticism. Susan Sontag misjudged the national mood when a week or two after the attacks she fulminated in The New Yorker—’Where is the acknowledgment that this was not a ‘cowardly’ attack on ‘civilization’ or ‘liberty’ or ‘humanity’ or ‘the free world’ but an attack on the world’s self-proclaimed superpower, undertaken as a consequence of specific American alliances and actions?’ The condemnation of her remarks was great enough to force even the formidable Sontag to backtrack, no matter that what she wrote was hardly radical. Even now 9/11 is shrouded in pietism propagated by the shrill, cynical cable news stations that see commercial gain in endless soft-focus tributes. The effect is that you have to be careful what you say, which inevitably shackles the imagination. Instead, there was and is much straining to insist the world could never be the same after 9/11, that art could never be the same, pop culture could never be the same.

Ten years on, despite the odd fine film or even rarer novel or poem, there has been no American art of real distinction made about 9/11 or that reflected the world post-9/11. This is perhaps because America hasn’t changed that much, because 9/11 affected far fewer people within America than the response to 9/11 did thousands of miles away. Surely, American artists cannot pretend 9/11 represents some sort of loss of innocence. Successive generations of American writers from the 1930s have written about the tarnished American dream, and US military forces were committing atrocities in Vietnam long before the wars in Afghanistan and Iraq. The difference now is that there doesn’t seem to be a thriving counterculture in America any longer; instead the culture is fracturing into ever more isolated subdivisions from the inane (celebrities, reality TV) to the crazy (9/11 conspiracy theorists). American artists have failed also to make a leap of empathy, to show the imaginative flexibility that might connect them to the world. Maybe ten years after 9/11 is still too soon for America to stop thinking in terms of ‘us’ and ‘them’.