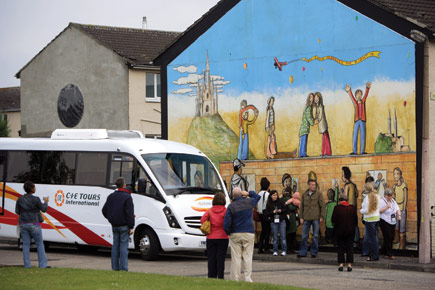 
The mere mention of Northern Ireland conjures up images of masked gunmen and car bombs, empty streets and homes with boarded windows. The sectarian violence between Catholics and Protestants, who live cheek by jowl in the northern part of this tiny island, raged for three decades and has left an indelible mark on the world’s memory. Though the guns had stopped almost ten years ago, Northern Ireland has not been able to shake off the image of its violent past. In reality, Northern Ireland is beautiful with lush green pastures, rolling hills and warm people.

Belfast, the capital and most infamous place during the sectarian war, is no different from the rest of the region. The city is often described as a saucer enclosed by hills. “At the end of every street you can see a mountain,” says Patrick, the smiling taxi driver who drove me to the city from the airport about 15 miles away. Belfast boasts a population of 500,000 to 800,000 if you include the outer areas. Divided into quarters, it is small enough to walk around the town in half an hour. Apart from the city’s long wall dedicated to artistic murals depicting various freedom struggles, there is no evidence of the violence that ripped the city apart for so long. “This is Shankill, the worst affected area,” says Patrick, driving through quiet streets with small terraced houses. “But here the government has set up special enterprise areas where it encourages people from both communities to come and work side by side,” he adds.

The old borders which Catholics and Protestants refused to cross have faded, and now there aren’t any no-go areas. Instead, the city is dotted with construction sites and big cranes. “There is building going on everywhere,” says Patrick, “And for years glass was rarely used because of the bombings, but now all the architects use as much glass as they possibly can to emphasise how safe Belfast is.” Ironically, today Belfast is the safest city in Europe with such low crime rates that the police have an extremely easy job.

Northern Ireland, the fourth and smallest constituent of the UK, is encouraging business and trade both in and out of the region in the hope that it can take its rightful place in the global village—and India is a vital part of this plan. “To date, eight projects by Indian companies have been secured, promoting over 3,000 jobs in Northern Ireland and committing to planned investment of over £85 million. They include significant investments by leading Indian companies such as HCL Technologies, Tech Mahindra and Firstsource Solutions,” says Arlene Foster, minister for enterprise, trade and investment for Northern Ireland.

Until the last couple of years, Northern Ireland only focussed on its traditional links with the other side of the Atlantic. Former US President Bill Clinton especially visited Belfast and stayed in the luxury hotel Europa, which holds the notorious distinction of being the most bombed hotel in the world, having been attacked 27 times. “Clinton stayed there to show that if he can be safe there, then anyone can,” says Patrick. But now Northern Irish politicians have turned eastwards to forge new links with India and China.

“Although the economic downturn has led to a depressed market for new foreign direct investment, Invest Northern Ireland (INI) remains committed to securing investment from India. That agency has a dedicated trade and investment office in Mumbai, which provides in-market support for all of its activities in the country and which continues to actively seek new investment opportunities for Northern Ireland,” says Foster.

The level of engagement that Northern Ireland enjoys with India is greater than with China and many European markets. India is fast becoming the second largest investor in Northern Ireland, after the US. Apart from HCL, Tech Mahindra and Firstsource Solutions, India’s Pix Transmission has recently acquired Flexequip Hydraulics in Lisburn and Firstsource has announced a major expansion that will create 800 new jobs.

The flow is not just one way. Northern Irish companies have also invested heavily in India over the past decade. “Northern Ireland businesses across many sectors, including software, engineering, construction, textiles and life sciences, are also creating jobs for Indian workers in centres such as Delhi, Mumbai, Kolkata, Chennai, Hyderabad and Cochin,” says Nigel Dodds, the former economy minister, who opened the INI office in Nariman Point in 2008.

FG Wilson Engineering makes portable diesel powered generating sets at Pondicherry for markets in India, South Asia and South East Asia. In the construction business, Mivan has carried out several residential housing projects for the Mumbai Metropolitan Regional Development Authority using its fast-track construction technique. Among textiles and clothing, the famous brand Savile Row Shirts has a strategic alliance with Forbes Gokak of Mumbai. There are also alliances by Northern Ireland technology companies with similar business in India. For example, JMT Direct is providing monitoring and evaluation services to call centres in India.

Another important trend to help Northern Ireland shed its war-torn image is the popularity of its student-exchange programmes. Indian students are being drawn to attend the Queen’s University in Belfast and University of Ulster. The prestigious Queen’s University has research tie ups with the National Institute of Immunology, Delhi, University of Hyderabad, and the Bengal Engineering and Science University in Kolkata. The 100-year-old university is also establishing an Institute for Contemporary Indian Studies. The force behind this is Vice Chancellor Professor Peter Gregson. “My dream for Queen’s is to see it as a truly global university. It has a reputation for promoting world-class research, and we are currently investing £260 million in its staff, students and infrastructure to develop a community of world-class academics and students,” says Professor Gregson.

Balancing high growth in knowledge sectors with low business costs and access to European destinations, the region is pulling out all stops to attract high-profile inward investors. It aims to position itself as the ideal springboard for Indian companies seeking to grow in both Europe and the US. “Indian business leaders seeking to exploit opportunities in the huge European marketplace should look to Northern Ireland for a skilled and highly educated workforce, excellent universities and ambitious companies with a commitment to international business and innovative products and services. They will also find a small but totally integrated and widely respected Indian community in Northern Ireland that’s been engaged in business here for over 70 years,” says Dodds.

The region has the youngest population in Europe with students who consistently perform well above other UK regions at GCSEs and A-Level exams. There is a strong work ethic and labour turnover rates are among the lowest in Europe. Operating costs are highly competitive and significantly lower than the rest of the UK and Europe. Prime office rents are among the lowest in the world. Couple this with its proximity to Europe—London is only an hour away by air, Dublin only two hours by road—and daily direct flights to a variety of European business locations such as Paris, Rome, Amsterdam and Berlin.

Northern Ireland has everything that people are looking for and can be an ideal gateway to the West, as long as you see it with new eyes. Forget the old images, that was long ago. Now it has everything going for it. It is a place worth visiting, doing business with, going for studies, and yes, even a safe place to live.