The struggles and consolations of India’s ice hockey team 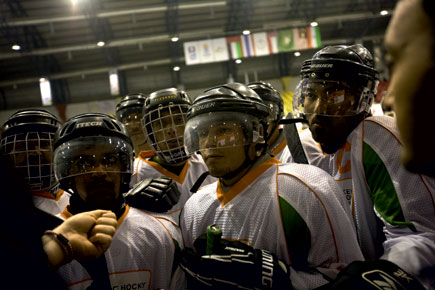 The struggles and consolations of India’s ice hockey team


In the middle of March, when Mahendra Singh Dhoni and his team were trying to salvage their reputation as world beaters in Dhaka, the Indian ice hockey team won its first international match ever. India defeated Macau 5-1 at the 2012 Challenge Cup of Asia in Dehradun, held at a 1,000-seater rink at Raipur Sports College.

The Macau match was India’s only success in the tournament. In fact, in their next engagement a few hours later, they got their asses whipped by Malaysia 18-2. And yet, for the motley crew that made up the Indian squad, it was a day to remember. The team was a mix of subedars and havaldars from the Army and Indo-Tibetan Border Police, and players from Ladakhi ice hockey clubs. The coach, a voluntary one, was an American adventure company employee from New York. His name is Adam Sherlip. The day of India’s win was his 29th birthday. After the match, left-winger Amit Belwal, the only non-Ladakhi in the team, went missing for hours. He returned at 6.30 in the evening, with a giant cake for Sherlip. It had been a long, mostly frustrating, struggle for all of them. This victory, even though it was a small one in the larger context, had to be savoured.

A bit of background about ice hockey in India: the sport is foreign to most of the country. Up in chilly Ladakh, though, it is a rage. When the ponds freeze up in December, they turn into impromptu rinks. On the origins of ice hockey in Ladakh, various versions abound. One is that the Indian Army picked it up by watching the Chinese play the game across the border. Another story says ice hockey was a gift from the Brits through the Shimla Ice-skating Club. But none of this has been validated. Even Abdul Hakim, full-time assistant coach of the Indian team, doesn’t know when the game was first played on Indian ice.

What Hakim does know is the ingenuity with which they made their equipment in Ladakh. For the puck, flat tins of Milkmaid came handy. They’d pack a tin with plastic and scrap and hold it over a flame. Once the contents melted and merged, the tin was pulled off the heat and frozen. Hammered at the base, bam, out popped a puck.

For the sticks, they used old Sintex tanks, tree branches, discarded wood, anything. The skates were made by chopping off blades from the softer and more expensive figure-skating shoes and attaching them to mighty steel-toed army boots, easily available in Ladakh.

The Indian ice hockey side reminds you of the travails of the Bangladesh cricket team during its initial years in the big bad world of international cricket: a haphazardly-assembled group with ages of players ranging from 18 to 40 playing a flawed game with equipment that’s either borrowed or cobbled together, and, therefore, suffering one drubbing after another. The pads of the Indian goalkeeper Sonam, for example, are held together by shoelaces.

Quality ice hockey gear ranges from Rs 60,000 to Rs 2-3 lakh. With Indian import duties and customs officers known to be as helpful as they are, the players rely mostly on favours from Indians travelling or living abroad. And if anything breaks or doesn’t fit, it’s jugaad time. Stitch it, tape it, tie it, nail it, just make it last one more game, please.

But as Coach Sherlip says, the problems extend beyond equipment. The fundamental issue is that India’s self-taught players have played a crude version of the game since childhood. Now, the coach finds it hard to flush it out of their systems: “They don’t possess an analytical approach, they don’t play smart hockey. They fail to hold positions or follow directions, and hence there is no concept of setting up a gameplan.” There is only so much time Sherlip can give them. Living in India all year round is out of the question for the American. The food, the culture (“beautiful but not mine”) and the bureaucracy, above all, tend to get to him. That is why Sherlip is trying to coach Abdul Hakim as a coach.

The players also need proper ice rinks. For this tournament, they were promised the use of the Raipur facility for a month. But it wasn’t ready, and the players had to travel to Rishikesh. There, in the absence of a rink, they discussed tactics on riverbank sand, exercised and bonded. But that couldn’t compensate for practice in a real rink. Gary Tan, the Malaysian captain, said that the Indian team had the hunger to win, but their lack of ice time showed. India pass the puck well enough, but they skate like sissies. The Malaysians practice twice a week on ice, and it shows in their game. The Indians do it two months in a year on a frozen pond half the size of a rink with no walls. What do you expect?

Despite frustrations, Sherlip is, by and large, a patient man. He has to wait for a lot of things—cab, lunch, his team, Abdul Hakim—but he takes it all in his stride. You can see he’s simmering inside, but he doesn’t blow his lid. Another coach in his place would have torn the rink down. He knows it’s pointless to lose his head over the team. All he mostly does is try to inspire them. His “you gotta play to win” speeches remind you of Shah Rukh Khan’s ‘Sattar minute’ pep talk in Chak De! India. Alas, Hakim has to translate Sherlip’s words, and something invariably gets lost.

But he has hope, and he and the ever-smiling Hakim have their sights set on the next generation of players, the under-18s, and under-16 boys and girls. Yes, girls too. Who knows, one of them could just be seven-year-old Kanishka, who watched the India-Malaysia game from the stands with her father, Vimal Kumar, 47, a technical officer at an ordinance factory. She had urged Kumar to make a placard for her, just like in cricket matches. The words on the banner, ironically, were, ‘Why Only Cricket?’ Kanishka didn’t understand the game, but did yell “yay” whenever a goal was scored or a player crashed into the boards.

Her father seemed to be watching the match passionately. Without my asking, he explained his reason for bringing Kanishka to the rink. It was the first time they were watching a game together. Without making eye contact, he admitted that he didn’t bother with India’s opening encounter against Macau because he couldn’t resist watching Virat Kohli take Pakistan apart in the other Asia Cup. To test him further, I asked him what he’d do if his girl wanted to become an ice hockey player. He rejected the thought with instant disdain: “I have only one daughter, why should she do this? She can learn singing, painting… why this?”

Kanishka and her father Vimal Kumar were among the few who turned up at the event. Most of the people around were a handful of school students, organisers and officials. For spectators, a big stumbling block was their lack of knowledge about the game. Or, maybe, the patience to sit through an entire match.

If the number of spectators at the start was 100, it would drop to about 15 towards the end of the third and final 20-minute period. The exodus would begin after the first period, when the ice would be levelled by a machine called Zamboni.

The Zamboni operator was a former emergency medical technician Vyacheslav ‘Slavo’ Kosenok, a 23-year-old never to be found without a Red Bull or his Marlboro Lights or both. Like Sherlip, he too worked in New York. Sherlip got him to India. As he smoothened the ice during the break, spectators nudged each other, asked “Khatam ho gaya (is it over?)”, got up, kickstarted their ricketty Bajaj Chetaks, and left, leaving behind a trail of paan stains in the parking lot as a mark of their attendance.

Somewhere amid the gloom and tackiness came the win over Macau. India had lost to the same opponent 5-3 in their opener, but this time, they upped their game and won 5-1. Each goal was followed by the title track of Chak De! India on the public address system. Thinles Tundue, a 29-year-old monk from a nearby monastery, came along with his fellow monks, and a Nikon DSLR, to watch all the India matches. He told me that this was a big, big victory, and people here may not understand it, but his fellow Ladakhis back home would surely be climbing trees and yelling it across the land. Martin Page, the Malaysian coach who had his eyes on every game in the tournament, looked at me while I lurked in the makeshift Indian dressing room and said, “Told you, they are good, don’t write them off yet.”

But within a few hours came the Malaysian hammering. After the match, Sherlip waited to speak to his tired team. Slowly, they assembled, and with restraint he told them that highs and lows were part of the game. He knew this wasn’t a time for harsh words. He blew a gum-bubble and asked, “Any more questions?”

Goalkeeper Sonam tentatively asked Hakim something. Hakim was confused whether to translate this or not. He finally did. “They want to know if you will come again next year to coach us,” he said to Sherlip.

The coach smiled and said he will.