This is how Mahinda Rajapaksa, president of the island nation, orchestrated the military and political operations that brought down the LTTE. Find out how he did what previous presidents could not 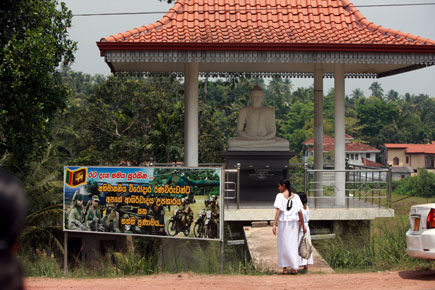 This is how Mahinda Rajapaksa, president of the island nation, orchestrated the military and political operations that brought down the LTTE


PRESIDENT MAHINDA RAJAPAKSA rode to power four years ago vowing to annihilate the LTTE. In the early hours of 18 May the fight for Eelam, a separate homeland for Tamils in Sri Lanka, ended in a lagoon, the Nanthi Kadal. Vellupillai Prabhakaran’s dead body, eyes wide open, was found in the lagoon.

In the President’s office in Colombo, officials talk about the ‘Rajapaksa Model’ (of fighting terror). “Broadly, win back the LTTE-held areas, eliminate the top LTTE leadership and give the Tamils a political solution.” Sunimal Fernando, one of Rajapaksa’s advisors, says that the President demonstrated a basic resolve: “Given the political will, the military can crush terrorism.”

This is not as simple as it sounds. Like most poll promises, he had not planned how to fulfill his promise to militarily defeat the LTTE. Three efforts, Eelam I to III, were miserable failures. So when the Rajapaksa Model evolved into Eelam IV, it was not pre-planned. The first fundamental of this approach was unwavering political will. Rajapaksa clearly conveyed to General Sarath Fonseka: “Eliminate the LTTE.” To the outside world, he conveyed the same message differently: “Either the LTTE surrender or face their end.” Rajapaksa instructed the Sri Lankan Army that its job was to fight and win the war. At whatever cost, however bloody it might be. He would take care of political pressures—domestic and international.

Following from the first, the second principle of Rajapaksa’s ‘How to Fight a War and Win it’ was telling the international community to ‘go to hell’. As the British and French foreign ministers, David Miliband and Bernard Kouchner, found out during their visit. They were cold-shouldered for suggesting a halt to the war and negotiations with the LTTE. As Rajapakse said during the post-interview chatter, “We will finish off the LTTE, we will finish terrorism and not allow it to regroup in this country ever. Every ceasefire has been used by the LTTE to consolidate, regroup and re-launch attacks, so no negotiations.” Eliminate and Annihilate—two key operational words that went with the ‘go to hell’ principle of the ‘Rajapaksa Model’.

Naturally, the third fundamental was no negotiations with the LTTE. “The firm decision of the political hierarchy not to go for talks with LTTE terrorists until they lay down arms had contributed significantly to all these war victories,” affirms Fonseka. But this meant withstanding international pressure to halt the war, the humanitarian crisis spawned by the war, and the rising civilian casualties. Rajapakse did all of this by simply ensuring ‘silence’ and an information blackout under which the war was conducted.

The information put out by LTTE’s official website, TamilNet, could not be independently verified on the ground because access to the war zone was regulated and controlled. This was a vital fourth principle of the Rajapaksa Model.

“Presidents Premadasa and Chandrika Bandarnaike gave orders to the military to take on the LTTE. But when success was near, they reversed the orders and instructed the military to pull back, to withdraw from operations because of international concerns about the humanitarian crisis and civilian causalities. So we had to ensure that we regulated the media. We didn’t want the international community to force peace negotiations on us,” says a source in the President’s office who wishes to remain anonymous.

When the United Nations, US and European countries raised concerns of high civilian casualties, Rajapaksa retorted that the international community was “getting in the way” of victory against terrorism. “We knew that the moment the military is close to operational successes, there will be loud screams for the resumption of the political process of peace negotiations. But there will be no negotiations.” That was the rock solid stand taken and communicated by Sri Lanka’s Defence Secretary Gotabhaya Rajapaksa to all visiting dignitaries and diplomats.

The fifth principle: Gotabhaya Rajapaksa, the President’s brother, consistently maintained that military operations would continue unhindered. “There will be no ceasefire,” he maintained.

“…the humanitarian crisis that engulfs civilians caught in the cross fire has always been the trigger point to order a military pullback,” asserted Minister for Human Rights and Disaster Management Mahinda Samarasinge. President Rajapaksa did not want to go down that route. That was the traditional way of fighting the LTTE, two steps forward, four steps back.

The Rajapaksa brothers were committed to a military solution. This was anchored in a deft political arrangement. Gotabhaya Rajapaksa was appointed the defence secretary precisely to break this political logjam. Gotabhaya has a military past and long-standing friendship with Lt General Sarath Fonseka. He asked Fonseka, “Can you go for a win?’’ The battle-hardened veteran said, “Yes, but you will have to permit me to pick my own team.” Gotabhaya and Mahinda agreed. “We will let the military do its job, while we hold the fort politically,” they told Fonseka.

So even though Gotabhaya came into the political setup virtually out of nowhere, he quickly became the bridge between the government and military. The Rajapakse brothers fused political commitment with a pre-set military goal. “He (Gotabhaya) was embraced and accepted by the military,” said a senior official in the President’s office. Gotabhaya communicated the military requirements to the government—men, material, weapons. President Rajapaksa, ensured the military got what it wanted. He instructed Gotabhaya to tell the army to get on with the task.

The author is senior editor, CNN-IBN