The slaughter at the Wisconsin gurdwara killed not just innocents, but innocence itself 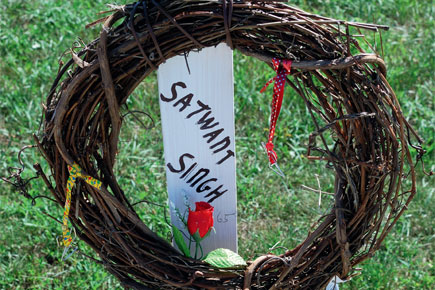 The slaughter at the Wisconsin gurdwara killed not just innocents, but innocence itself


I was sitting in a hotel room in Athens, Greece, when I heard the news, several hours after it happened, that a gunman had opened fire on worshippers in a Sikh temple in Oak Park, Wisconsin. It is a sad testament to the fact that mass killings have become so commonplace in the United States that it took a personal connection to the events for me to be jolted by the slaughter, and to start searching immediately for news. Being a Sikh, and being an American, it was as if two sides of my identity had clashed, and clashed far away, in a place I had never visited or even knew about before Sunday night.

While Americans were learning through cable television about Sikhs and Sikhism, in that gruesome tradition we have now that accompanies mass slaughter when anyone or any group that is out of the mainstream is targeted, I found myself learning a little about a small town in Wisconsin. From what I could gather, and from the response of the community, it struck me as a fair-minded and open place, and not the kind of place where people go around slaughtering the innocent.

In the annals of violent death in America, it is in just such places that we find our mass murderers. It is in the sleepy corners where no one has looked too closely, of which no one has asked too many hard questions, that a neglected and deeply hurt soul lurks, plotting a sickening crime.

In the immediate aftermath of the attack, I heard reports of several of the congregants asking seriously of the world this question: “What have we done wrong?” They did not seem to mean ‘What have we done wrong to God’, but ‘What have we done wrong to America’. There was something profoundly poignant in that question, something that reflects the gentle character of many Sikhs in the US, and also something quite painful for me, as a Sikh, to hear. In that simply stated question were locked the values held by so many in the Sikh community here, which is to keep our heads down, to not be noticed, to not make a fuss, to not make too many demands, and to keep all trouble within the community inside it—to remain, in essence, a secret island in the heart of the vast sea that is America.

My first thought when I heard the news was that a fellow Sikh must have done this. It was inconceivable that any outsider would ever have noticed us enough to harbour this kind of hatred. In Britain, where I grew up, racist violence was common, and I was sometimes a target of brutal attacks, and witnessed many more. I believed I had left all that behind after I came to America, that even in the racist attacks on Sikhs that followed 9/11, I still thought of Sikhs as an essentially invisible minority, far below the radar of any true racist worth his bigoted salt.

I am not a religious Sikh, but I hold precious memories of attending gurdwara, listening to bhajans and running around, when I was child, with other children in the courtyard and outside. For all the problems of the Sikh community in the US, the gurdwara remained a place set apart, a sanctuary of relative tranquillity, which at least attempted in some measure to live up to the values passed down by our Gurus.

Beyond the lives tragically lost, it is the attack on this institution that I feel most deeply, for the gurdwara is not only a place of worship and service, but also one of real community and, for the children, of uninhibited play where the demands of parents are relaxed and the spectre of bullies a distant threat.

It is where the aunties come to gossip, slowly climbing the stairs in their elegant shalwar kameezes and heirloom saris, clutching each other’s arms as much for companionship as for balance. It is where the drunkard uncles nurse their hangovers on a Sunday morning, backs resting against walls and hands wiping the sweat from their brows, rising a second too late during the service and dropping again to their knees after everyone else. It is where young men begin to learn how to show off for young women, and young women stand in tight circles, watching, appraising with highly critical eyes, and giggling. It is where feuding relatives have to hide their animosities for a few hours for fear of being publically shamed. It is where the old are able to sit quietly, taking part as they will, and helped to their feet if need be by those around them. It is where children can roam freely, weaving through the crowd of grown-ups, sometimes able to escape the service entirely in this confusion and run outside, away from the watchful eyes of parents.

As a child, I was usually bored by the services. I didn’t understand what was being said, and I didn’t know when I was supposed to stand and when to sit. I was embarrassed when I had to walk up among all the people to get on my knees and do the ceremonial matha tek before the Guru Granth Sahib and make an offering. And I always felt awkward not knowing whether I was allowed to leave the hall and play outside or had to stay, and so would sit fidgeting, watching the backs of men or women, depending on which section I was in, and searching for any opportunity to run outside.

But those times I was able to escape and play with the other children are among my treasured memories of childhood. I remember one gurdwara we attended often when I was very young. It was located next to a park that included a stream, and nearby was camped a family of gypsies, who both terrified and fascinated me. I had a wonderful time walking along the edge of the stream, looking into the water, collecting all sorts of odds and ends that I found on the ground, and marvelling at the trees and the foliage.

As we mourn for the dead in Oak Park, I also mourn for the loss of innocence for that dear institution. I doubt any gurdwara in the United States will feel as free and uninhibited after the events of this past weekend. The killer who took so many lives has also taken something precious from future generations, who will only know gurdwaras with armed guards standing out front and parents constantly watchful and apprehensive.

Ranbir Sidhu is a New York-based writer. His first book, Good Indian Girls, will be published by HarperCollins India this fall