Own some Moon? Yasser Rehman does. He even knows what to do with his lunar patch 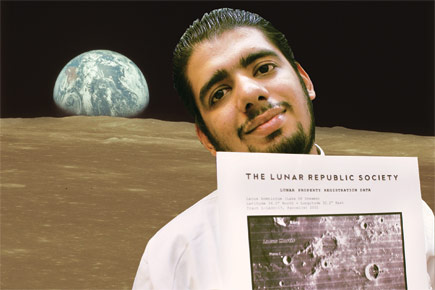 Own some Moon? Yasser Rehman does. He even knows what to do with his lunar patch


We tried Tom Cruise. But his agent wouldn’t put us through. Obviously. So we did the next best thing. We tracked down Cruise’s neighbour… neighbour on the moon, that is.

If you already own the hottest property on Earth, only Outer Space can offer a better view, right? So while most of us are content to watch TV specials celebrating 40 years of the moon landing this week, there are a few others—one of them a young successful realtor from Chennai—who have much grander plans. Such as owning some of it. And, who knows, maybe even doing a Neil Armstrong someday.

Space tourism is here. “It costs $1 million to the moon and back. That is only about five times the cost of a chartered flight from Chennai to Dubai,” says Yasser Rehman, owner of Plot 2051, situated right next to the Lacus Somniorum or the Lake of Dreams, the largest lake on the Moon.

Rehman’s story on how he came to buy land on the moon is the sort celebrities like to tell. “It was my 21st birthday and I was listening to Fly Me to the Moon on the radio. I am a big Frank Sinatra fan. And I thought why not buy myself a piece of the moon to celebrate my birthday,” says the 23-year-old businessman. He believes he has some high-flying neighbours too—George Bush Sr, Arnold Schwarzenegger, filmstars from the Netherlands, not to mention Hollywood’s star couple TomKat.

But seriously. How is Rehman sure that the website he bought it from, the Lunar Republic Society, which introduces itself as the ‘the Official Website of the Moon’, isn’t a scam like the hundreds of other websites promising the moon and more. Is the land on the moon even ‘On Sale’?

He agrees there are a lot of scam artists on the Net. But, “I paid practically nothing for it. I could if I want sell it for a profit now, if I want to. But I think I am going to keep it. It is for my kids.”

But that is not to say Rehman hasn’t done some cross-checking for himself. He passed on to his lawyer this very official-looking assignment of land claim documents sent by the Lunar Republic Society. “The Outer Space Treaty of 1967 has some loopholes. It forbids States from staking ownership of celestial bodies, but it doesn’t forbid individuals,” he says. That was also Nevada-based entrepreneur David Hope’s argument when he claimed ownership of the Moon way back in 1980. The United Nations is yet to get back to him on that, though (perhaps a trifle preoccupied).

Open did mail the guys at the Lunar Republic Society. This, perhaps, is a busy week for them, 40th anniversary celebrations and all. It might take a while before they get back on our queries. Meanwhile, Rehman has come to have some very futuristic commercial lunar interests. “You see, I also have mining rights. Wasn’t India’s moon mission all about detecting minerals on the Moon surface?” asks Rehman. It sure was. Mining Helium 3, a very rare fuel on earth that could be used to power fusion reactors, is indeed on India’s list of things to do on the Moon. Well, whether Yasser is going be raking in any of that nuclear fuel is anybody’s guess.

Scam or no scam, the young Sinatra fan is amused by all the media attention he is getting. He has a pet project he likes to talk about. He takes pictures of the moon from every city he visits. He has about 70 pictures so far. “The ones from Mauritius are the best,” he says.

At $42 an acre, Rehman essentially bought himself a grand idea that keeps him entertained with all its wild possibilities. He has his wish. And is pleased with himself.