Mitt Romney, a Man for All Seasons. Or Not 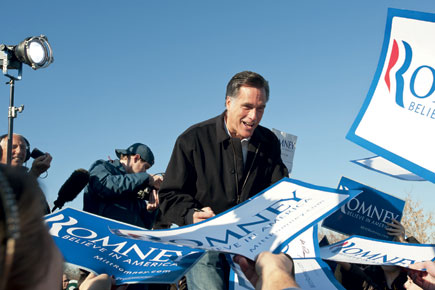 
NEW YORK ~ If ever a candidate walked straight out of central casting to take up the role of the presidential challenger for the Republican Party, with his hairspray still glistening, his chin chiselled just so, and his body language dominating any room he walks into, that man is Mitt Romney. Even former actor Ronald Reagan couldn’t pull off so pitch perfect a performance as Romney has managed thus far. But having said that, any movie director would be a fool to actually cast him in the role. Why? The audience would laugh. He just looks too perfect.

There has always been something a little too perfect about Mitt Romney. He is a lifelong teetotaller, a non-smoker, the kind of fella who eschews salty language for an old-fashioned “aww shucks”, a dedicated family man with an overflowing brood of gorgeous children and grandchildren, and a successful Republican governor in one of the nation’s most liberal bastions, Massachusetts, the home of the notoriously drunken, cursing, womanising and bleeding heart Kennedys. The nominating contest has hardly begun, only two small states have voted, and one thing is already certain: Mitt will win, and he will be the Republican candidate to challenge Barack Obama for the US presidency.

Willard Mitt Romney as born in 1947 to wealthy Mormon parents who were themselves born in Mexico. His grandparents had fled there to a small Mormon colony to escape what they believed was religious persecution in the United States that prevented them from having polygamous families, or as Mormons call it, “plural marriage.” This is a fact Mitt never discusses, nor does he discuss his still living Mexican relatives. Any hint of foreignness can spell doom for Republicans, as another candidate Jon Huntsman recently discovered when he demonstrated his mastery of fluent Mandarin during a nationally televised debate. His campaign had already been spinning its wheels, but the moment he opened his mouth and out popped those foreign syllables, everyone in that room and watching on television could literally see him sink into the deep, choking mud of the Also Rans (indeed, he dropped out but days later).

Romney’s Mormon faith continues to be a quietly simmering issue and one that is not likely to go away. Many mainstream Christians, especially the evangelical or deeply conservative Christians who make up a large segment of the core of the Republican base, do not consider Mormonism part of the Christian fold. Mormons do believe in The Bible, but they also follow a somewhat wacky text called The Book of Mormon which is supposed to have been discovered by their founder Joseph Smith, written by Native Americans in a cryptic and previously unknown pseudo-Egyptian script and etched onto golden tablets Smith uncovered in the woods of upstate New York after being led there by an angel. This is a strange book indeed, a sort of nineteenth century sci-fi mishmash with talk of lost tribes and Egypt and Native Americans and nods to American exceptionalism, and it’s a book that many staunch Republicans look on with genuine mistrust. There remain a considerable number of Republicans who still say they will never vote for a Mormon and it is a problem that is sure to plague Romney in the general election, as it will depress voter turnout and enthusiasm, both of which will need to be wildly high for Romney to prevail against Obama.

What is surprising about Romney today is that among the current field of candidates, he has staked out staunchly conservative positions on many of the touchstone issues dear to the heart of the Republican base, positions which are often quite clearly in conflict with his own of only a few years ago. This is additionally striking as the current field is probably among the most conservative in many decades. As governor of Massachusetts, he was considered a moderate who instituted statewide healthcare reform (the model for the much vilified Obamacare that he now vows to repeal), was pro-choice (a fact he now grossly soft-pedals) and until quite recently, even believed in man-made climate change (but luckily, he’s moved lock, stock and barrel into the anti-science wing of the Republican party in recent months). Indeed, if he ran today on the positions he held while governor, there would be little if any daylight between himself and Barack Obama.

But despite his history of egregious flip-flops and the lack of comfort many have with his religion, if anything sinks him as a candidate it will be the most unexpected, especially for a Republican: plainly put, money. If Romney wins, he will be the richest candidate for president the United States has ever known, and it was money he made as CEO of a venture capital firm called Bain Capital. The business bought up ailing companies, fired many, restructured much, and made obscene profits. Naked capitalism at its worst, or best, whatever your viewpoint. Romney plainly espouses the latter, but in an era where the richest 1 per cent find themselves at the receiving end of much anger not only for their wealth, but for their perceived role in bringing down the world economy, it will be a delicate balancing act for the boy born with a silver spoon in his mouth.

The irony, of course, is that Republicans are the party of the moneyed elites, but they have a history of trying to hide this fact by nominating candidates with up-from-poverty life stories. Not this time, and the contrast could not be starker against Obama, and it is one of the many contrasts that will define the 2012 race and likely make it one of the most lively in many years.

Ranbir Sidhu is a writer and playwright living in New York. His first book, Solzhenitsyn In Vermont, a collection of stories, will be published by Harper Collins India this year