Looking for Comedy in the Muslim World

Aasif Mandvi, ‘Brown Correspondent’ of Jon Stewart’s The Daily Show that airs in America, on satire, pop culture and bigotry 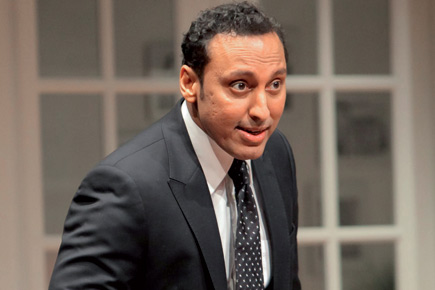 Aasif Mandvi, ‘Brown Correspondent’ of Jon Stewart’s The Daily Show that airs in America, on satire, pop culture and bigotry


Aasif Mandvi is everywhere. He’s on your television screens as The Muslim Correspondent or The Brown Correspondent on one of the most watched political comedy shows in America, The Daily Show with Jon Stewart. In 2012 alone, he was in four movies—Premium Rush, Ruby Sparks, The Dictator and Dark Horse. He is now back to his first love, theatre, starring in a brave new play on racism in America, post 9/11, called Disgraced. And although he’s been around for 20 years now, having worked with the likes of Robert De Niro (Analyse This), Bruce Willis (Die Hard with a Vengeance) and in blockbusters like Spiderman 2, it looks like he’s just getting started. Named as one of the most influential global Indians by GQ magazines, Mandvi gets serious about comedy in an exclusive interview:

Q Since you started working on The Daily Show with Jon Stewart, you’ve been widely acclaimed by the American press as a representative of the ‘moderate Muslim voice’. Do you think of it as a responsibility now?

A (Thinks) Let me answer the question in this way: having been raised as a Muslim in America, after 9/11, in some way, I was politicised, because you couldn’t help being politicised at the time. Then I got The Daily Show, which is a huge platform, of course, and because of my role in it and because of my ethnicity, I get talked about on both sides of the fence. On the show, I satirise something that then has its effect out in the world, as it makes some people get up and use it as a way to represent the Muslim community. And this stuff that I satirise isn’t entirely created by me; there is a team of writers that works on it along with me. So even though I understand—and this is important—why I’ve been called that, and I understand the need of a representative, and I also understand why it’s happening to me, I can’t worry about it and I can’t think about it. Because that’ll limit you as an artiste, or a writer, actor or creator… if you worry about it.

Q Clearly, the community thinks different. You received the prestigious Freedom of Expression Award from The Council of American-Islamic Relations (CAIR) in 2011 for your ‘comedic body of work that has played a significant role in exposing anti-Muslim bigotry in America’.

A The CAIR award is certainly an honour, but it’s also absurd (chuckles), if you know what I mean. I mean, it’s more of a reflection of the lack of moderate Muslim voices in society as a whole that I was given the CAIR award. You know, when I got the CAIR award, a Syrian composer, Malek Jandali, was also given it along with me. And he was given it for composing and performing a song (Watani Ana), which served as a backdrop for the Syrian revolution, at a rally in Washington DC. His parents were beaten up brutally by Assad’s security forces in Syria as retaliation. It’s a very tragic story. So he was getting the CAIR award for all that, and I was getting it; and I do sketches and I do jokes. I don’t want to sound full of it here—I greatly respect the fact that I was given the award and I’m extremely grateful for it—[but] I just think it speaks about the larger vacuum of moderate Muslim voices within society, that they gave me the award.

Q But don’t you think that your satirising the paranoia against Islam on The Daily Show has helped alleviate the ignorance of Islam in America?

A See, I think that in terms of what I do on the show, and because at the end of the day we’re a comedy show, there’s a certain level of catharsis that has been achieved, about the fact that I get up there and I say stuff that lands on people. But the reality is, that as far as America goes on a larger level, only 3 million people are watching The Daily Show every night. Compare that to the 22 million people that watch Fox News, for example. So has the conversation about Islam changed? No, not really. Because, for being a highly acclaimed, highly received and highly critically placed show, The Daily Show has a very specific impact on a particular section of society, but there’s a whole slew of people in America who never watch it.

See, when 9/11 happened, there was a definite conversation about what is Islam, who are Muslims, and what is the Quran? But in the 12 years since then, Americans have taken this curiosity and politicised it. The mainstream media and politicians have turned this curiosity into fear. So now, unfortunately, most Americans think that they know the answers. That they understand Islam. And the answer is that you have to be afraid. That Islam is dangerous. That it means ‘jihad’. And unfortunately, as we go into the future, this politicisation and sensationalising of the entire relationship of America with the Muslim world will only take us back a few steps instead of forward. I mean, when Obama came to power and they started calling him a Muslim, it was supposed to be a demeaning thing and was supposed to undermine him; that if he were a Muslim, it would somehow be bad. And that’s the unfortunate trajectory the American consciousness has taken after 9/11, and it’s a tragedy.

Q What do you think the role of pop culture should be in changing this?

A Now here’s where I reverse the same argument: 3 million is still a relatively large audience that The Daily Show reaches. And satire, by nature, helps get a certain level of influence within the zeitgeist and collective consciousness. So I think if pop culture keeps at it, there is an actual effect of change [that] shows like The Daily Show can have by [getting] people to think in ways they haven’t thought before otherwise, and to [experience] catharsis.

But on the other hand, it can all only change to a certain extent. For example, we once covered a protest against the proposed construction of a mosque in Tennessee, two-three years ago. I interviewed the leader of the opposition, Laurie Cardoza-Moore, and her reasons for trying to close down the construction was that… it was a mosque. So while that segment generated a lot of conversation, ultimately it didn’t matter and the construction was shut down. So again, the conversation has gone from a dialogue to basically shutting down and burying the conversation altogether. But, you know, even if there are times we lose, we are also on the winning side a few times, so we’ll certainly keep at that.

Q You’re now doing a serious off-Broadway play about racism and cultural identity in America called Disgraced. Is that also an attempt at keeping the conversation alive?

A Yes, doing the play was a no-brainer for me. It is brilliantly written by a Pakistani-American, Ayad Akhtar. Apart from the fact that there’s probably never been a serious role or play like an Othello on the New York stage for South Asian American actors, especially Muslim actors, I really thought it was the best thing written about this conversation in a long time. It’s honest, brutal, brave and very provocative. In theatre, people sit in a dark room with the actors on stage and are forced to wrestle with their own personal demons and prejudices, so it’s a very different beast than a political comedy at 11 o’ clock at night on Comedy Central. People have come out of Disgraced crying or in deep conversation or deep thought, you know.

I come from a much more liberal and secular Muslim family than the protagonist of the play, Amir Kapoor, who comes from a very conservative and traditional family with much more dogmatic opinions and a dangerous perspective of things. But I could still relate to him in many ways, specially to the disassociation from the culture and the clash of East and West values. I understand the difficulty in trying to find your identity and in growing up as a South Asian in America, especially post 9/11. And so I thought it was important for me to be a part of such a play, and I hope it is making people uncomfortable.

Q A while ago, in an article on Salon.com, you wrote, tongue-in-cheek, about the ‘whitewashing’ phenomenon in Hollywood, where America thinks of South Asian actors as White actors in Brown makeup. Now that we seem to be breaking out of the stereotypes of a cab driver, infotech engineer or a deli owner, do you think this is changing?

A Well, I think while the conversations on Islam may not be improving, South Asians, in general, are becoming a part of the American conscience now. Although I don’t think we have broken out of stereotypes entirely, I just think that as time has gone by, the new generation of South Asian comedians, writers and actors are a part of the American existence. Be it Aziz Ansari, Kal Penn or Mindy Kaling, there are certainly a lot more South Asians on TV and in movies than there used to be since I started in the business back in 1991. So yes, America is changing to that extent. But does that mean that Hollywood is comfortable casting South Asian actors without accents? No, it’s not. I just did an Owen Wilson-Vince Vaughn movie called The Internship, where my character has an Indian accent.

But it’s a very different kind of thing at play here, because there are people with accents. There’s nothing wrong with playing a cab driver or a deli owner or even a terrorist, because those people exist and are real. It basically comes down to the writing. Are these written as one-dimensional jokes for White people, or are they written with some level of nuance, sophistication, thought and an arc or story of some kind? And that’s what’s really changing for South Asian actors, you know. The writing and the roles are getting better, not that the characters now don’t have accents.

Q Apart from movies, you are also writing a book about your experiences in the US.

A Yeah, it’s been in the works for some time now. It’s a series of essays and short stories about my life growing up in England and working in America. It’s semi-autobiographical with anecdotal stories along the way, which are funny and amusing and relevant in some way, but some that are also serious. Then there are a few movies lined up, and there’s Disgraced and there’s The Daily Show. At some point in the future, I may be creating a TV show for CBS. I actually don’t know exactly where I am going from here, but I would like to continue writing, acting, and creating more stuff and putting it out there, and hoping it lands on people in a way that makes them feel. But I don’t have a larger agenda or a political one, and the only reason it’s working or has worked in the past is that (chuckles) I never had a plan B either.