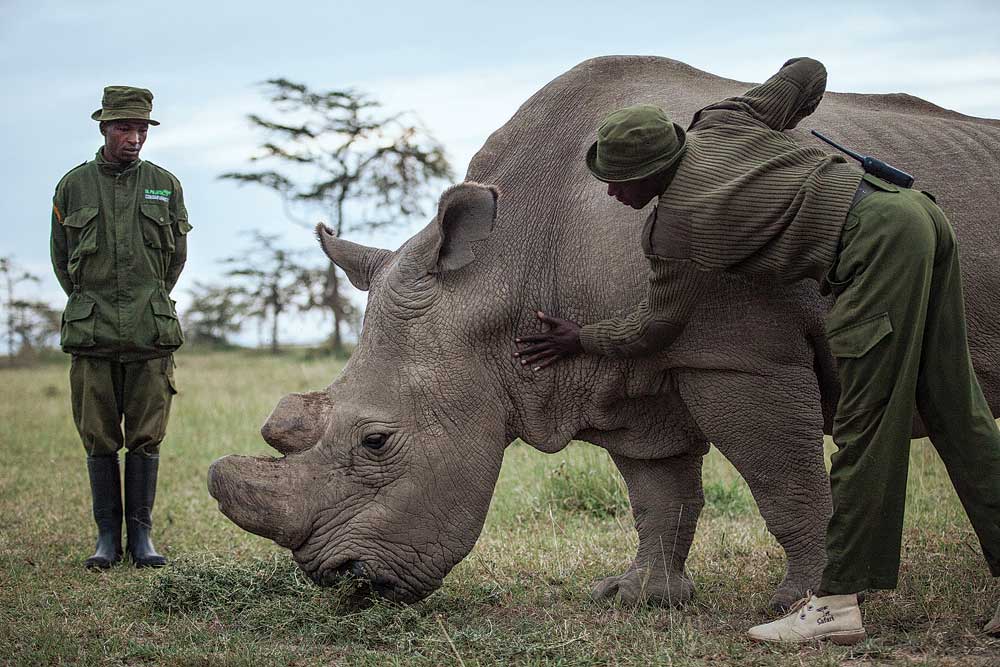 HE IS CALLED Sudan and he lies, head bowed under the burden of being the last male of his kind in the world. He lies sprawled in the dust, his forelegs seemingly unable to bear the weight of his gargantuan grey body. His face is creased and dusty, pale white mud flakes encrusting a tired visage. His eyes are closed, the eyelids bearing surprisingly long black eyelashes that flutter once and then lie still once more. Only the occasional breath indicates that Sudan is still not ready to be declared dead. His horn is wide at the base but what would have once been a long, sinuously tapering sexual adornment is now trimmed back by human hands into a sorry stump. Like a felled redwood—nay, a slain Cyclops— Sudan contemplates what must be the last moments of his life in his primeval mind. Or does he? Is his rhino mind able to contemplate the past? Or the future of his species? In the present, he is separated by a fence from others of his kind. Two ageing females, which he lost interest in some years ago. He has lived 43 rhino years (equivalent to 90 human years), most of them in a zoo in the Czech Republic and the last few here, at the Ol Pejeta Conservancy in Kenya.

There is a fence on the other side as well. Beyond that, a scraggly human queue has formed, ready with cameras to take photos with him. Selfies with Sudan would sound good on Facebook. For he is a celebrity of a kind: the last male Northern White rhino. The last hope of his species. Some would say sub-species, but that arcane scientific irritant does in no way diminish his stature. Sudan’s line had split from the remaining White rhinos of Africa more than a million years ago and for all human purposes, he is a distinct form. One that now has ‘Extinct In the Wild’ pencilled against him in the Red List of Threatened Species and which, with his demise, will slide into the permanence of extinction.

I have worked with two species of rhinos in my life. Much of this has been with the Greater One-Horned rhino, an armoured behemoth that once trampled the entire length of the Indo-Gangetic Brahmaputra plains from the marshes of eastern Pakistan right into what was then Burma. It is wrong to call this giant an Indian rhino, for Nepal is another habitat for the beast. In those days, it overlapped territories with the Sumatran Woolly rhino and the Javan One-Horned rhino in the north-east of India. By the 1930s both the smaller forms had disappeared from the Indian Subcontinent and only the Greater One-Horned rhino remained. Along with the horseshoe crab, the marine turtles and the crocodiles, they remain symbolic of a prehistoric India that is rarely touted and never celebrated. More than 2,000 of them still survive in six pockets in the North-east and in one pocket in Dudhwa, Uttar Pradesh. Kaziranga still remains the great bank that has preserved this wonderful animal from extinction, but the names of Manas, Orang, Pabitora, Jaldapara and Gorumara will surely go down in history as other regions that have kept this species alive in a modern civilisation of a billion people and 6 per cent economic growth.

The other rhino I saw closely in the 90s was in Kenya. The Black rhino was being decimated in large swathes across Africa. Kenya was determined to protect its animals the best that it could. Richard Leakey was director of the Kenya Wildlife Services at the time and was heading a project that also included moving rhinos from Nairobi National Park into Tsavo, a wilderness of astounding proportions. The rhinos were to be allocated around 20,000 sq km of habitat. Kaziranga pales into insignificance in comparison, with only 430 sq km of habitat. It was in the confines of the Nairobi National Park that I came across the Black rhino as we darted the animal, recorded his vital stats, trimmed his horn and put him into a sling that would forklift him into a crate to Tsavo. I helped with the operation, learning the technique which years later we would use in India to move our rhinos from Kaziranga into Manas National Park. How similar the two behemoths were in size and armoury. How different they were from each other in behaviour. Ours, the one-horned armoured giant, is a creature of the marshes that sloshes through wet mud and elephant grass and bites you hard in the rear if you come too close to it. The Black rhino, on the other hand, is a forest beast, two large horns balanced precariously on its head, its lips pinched back in a hook that helps it nibble on leaves of bushes and small trees and useless for biting people. It uses its horn instead for defence.

And then, there is the White rhino. It was originally known as the ‘wide’ rhino, indicating the wide lips that allow it to graze on grass rather than browse on leaves. Both the Black and the White rhinos in reality are grey, the colour deepening with a wallow and becoming lighter with a dry dust bath. Just as Sudan seemed to be doing at Ol Pejeta last month when I visited him for one last viewing of a doomed species. I am getting, unfortunately quite used to this sort of thing. I had seen the Chinese river dolphin, the Baiji, in the Yangtse in the early 1990s once. It is now extinct. I have the responsibility of holding the last female wild Central Indian buffalo, Asha, in captivity in the forests of Udanti, Chhattisgarh, in order to save the sub-species. The Wildlife Trust of India has in that project certainly saved the sub-species from near extinction. Now we have three females and seven males, ten known individuals in captivity. And with news of a herd in the wild that has also been discovered, there seems to be a slim thread connecting the pure progenitor of all breeds of buffalo with a living world. So, in this, the Anthropocene cycle of extinctions, it is not rare for someone in my field to wake up to news of one more animal being declared extinct. The latest I woke up to is the Mallee Emu-Wren, extinct after a bushfire decimated its last known habitat in southern Australia. But it is still rare to spend an hour or more with the last known member of a clan. Sudan’s wild counterparts died out in the Congo a few years ago or so. The last members were sighted in Garamba in Democratic Republic of Congo a few years ago.

Sudan is not an endling. That dubious honour will be bestowed on either Najin or Fatu, the two females that look like they will outlive him. The world remembers Martha, the last passenger pigeon, Incas, the last Carolina parakeet, Benjamin the last Tasmanian tiger and Celia, the last Pyrennean ibex. They were all the last of their kind.

I stand with my head bowed for a few minutes, touching the rhino lightly on his back. I want desperately to hold him a little closer, to rest my forehead on his. But as a biologist, I am not supposed to. That would be foolhardy. I might transmit a disease or catch one; even worse, I may betray emotion when I am supposed to be wretchedly cold and unbiased. A purveyor of the fate of the world, a mechanical recorder of the destruction of nature by man. What more can I do but spin fanciful possibilities in my own head and spin anthropomorphic possibilities to fill Sudan’s head. Is he filled with Survivor Guilt or Angst Dissonance? Is he the evil nihilist, the cause of the termination of life or the good soul, the last of a kind? A conservationist, an animal rights activist, a philosopher and a hunter may arrive at different conclusions. Sudan—so ironically named, for were it not men from Sudan who wiped out many of his kind from the parent country and from the Congo? — is privy to his thoughts and is immune to ours. It is not for us to second guess him. But I can and did dwell on his problem in my world. And I remembered an easier way in which it could be enunciated. Hector Barbossa says it in Pirates of the Caribbean, “You know the problem of being the last of anything; by and by, there be none left at all.”