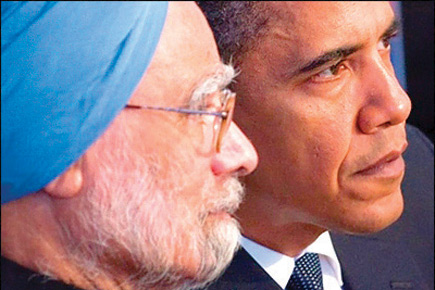 Manmohan Singh’s maiden visit to the Obama White House need not make news to be a success.


Are all our cards marked in advance? The Indo-US relationship is now about ‘partnership’ as the buzz goes. Since 2005, it is said to have taken an entirely new trajectory. And now with the Gita-on-his-shelf President Barack Obama—projected as a believer in the Indian cause—in the White House, optimists see the partnership ascending some paradise where trout streams flow and the air is nice.

Sorry to play the illusion popper, but the US diplomatic stance since the Great Non-White Hope came to office has been more worrying than reassuring for Indian strategists. Thus, Prime Minister Manmohan Singh’s visit to Washington DC is laced with caution. It should be. There is a complex set of issues that he will have to thrash out, or at least begin addressing, at 1600 Pennsylvania Avenue.

Let’s face it, India does not know what’s on the American leadership’s mind. From indications so far, and Obama’s Beijing visit, this administration has hinted that it looks at India as a mid-level player and China as Asia’s emerging leader on the world stage. Notwithstanding the little storm-in-a-sailboat some time ago about US tyre tariffs, Obama’s talks with China’s Hu Jintao in Beijing seem to signal as much. It’s unclear if India is listening closely enough to pick up clues.

Of immediate concern all around is ‘Af-Pak’, another sticking point for the Indo-US bilateral relationship. The US is displeased at India’s playing any role in stabilising Afghanistan, since that makes Pakistan nervous. The divergence of views between the two big democracies is most stark on Pakistan, America’s $8-billion aid package to which has already met with protests from New Delhi, which is peeved about Islamabad’s lack of cooperation on the Hafiz Saeed case and its intransigence on other terror-related issues. While the US has been of help on the 26/11 investigation (as the David Headley leads show), it has not brought pressure to bear on Pakistan to stop pretending Al-Qaida can be fought without tackling terror aimed at Indian interests. Less openly, India is unsure of Pakistan’s end of the bargain in the ongoing war on terror being waged in the region; would it impinge on Indian sovereignty? This represents a real trust deficit, and so expectations from the PM’s visit are low.

“This is not a visit about big ticket agreements,” says Thomas Abraham, deputy director of IDSA, a defence think-tank in New Delhi, “It is at best a symbolic rendezvous in the White House. I do not think India and the US have turned the corner of the relationship despite the Nuclear Deal. It is unlikely that any real breakthrough will happen, in fact there may be more confidence building and articulation of irritants.” However, given that Indian leaders have this strange desire to make visits to the White House ‘successful’, observers in India are bracing themselves for the possible yielding of significant ground to the US on non-proliferation, Afghanistan or global warming.

The worries are so strong that foreign policy analysts are talking in terms of devising new ways for India to assert itself. India, they say, needs to let the American side know the extent of the drift between the two countries since the bohemian rhapsody that ensued after the Nuclear Deal.

The deal itself appears to be on the backburner right now, as the US continues to pressure India on a host of other sensitive technologies. The much ballyhooed ‘exception’ given to India on matters of nuclear technology could, at this rate, be overtaken by other entanglements with which India is much less comfortable. The pressure on India is not mere posturing on America’s part.

Business will do done, of course. India is hoping that the US will come good on concessions on high technology access for Indian firms. Currently, the US has placed restrictions that Shyam Saran, India’s special envoy on nuclear matters in the Prime Minister’s Office, has termed “unnecessary”. Here, the businessmen in the PM’s delegation will come into play. At least two nuclear reactors are likely to be bought by India from the US. Also, a $10 billion deal could be in the works for multi-role fighter jets for the Indian Air Force. India has the cheque book that can make a recession-hit country jump with joy. The PM will need to be play hardball, though, to get the desired technologies.

On global warming, the talks might be much less amiable. “The US is hunkering down on us,” in the words of an Indian diplomat who prefers anonymity since he is not authorised to speak, “This is a complex web of influences from aid agencies, NGOs and direct pressure. They want some sort of commitment during the visit by India on emission cuts. It will take a lot of astute diplomacy to avoid these commitments.”

In other words, the PM will have to weigh his dealings very carefully in making the most of India’s new engagement of the US. It is easy to be taken in by the pomp, glamour and prestige of being the first overseas visitor to be received in full ‘State Guest’ splendour—not accorded to Israel’s Binyamin Netanyahu, for example, who went recently—by the US President at home. If the PM keeps his own counsel, plays his own cards, and his visit is seen as a search for ways to resolve the issues that hamper the relationship, it would be good enough. There are no instant solutions.