Forget cricket. A Pakistani music show is breaking down barriers. 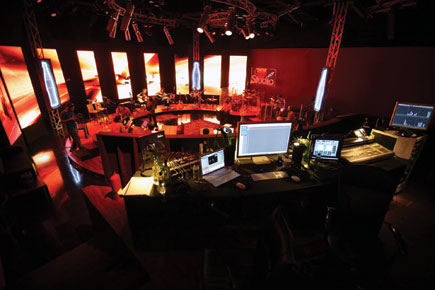 Forget cricket. A Pakistani music show is breaking down barriers.


In the call-and-respond flow of abuse that makes up the majority of comments on that bedrock of the internet, YouTube, few battles are more vacuous than the familiar flamewar between Indian and Pakistani users. The shared popular culture and history of the two countries covers vast quantities of desi content—films, cricket highlights, news shows, Atif Aslam superhits—that find their way, sometimes even legitimately, to the video sharing site. These videos are often forced to recede into the background as rage, expressed in a multitude of shared languages, takes charge.

But in this seemingly endless deadlock, a détente is achieved in the discussion threads under the video clips of a phenomenon called Coke Studio. Against the spectacularly-viewed and keenly-discussed music of this TV show aired from Karachi,  angry neighbours put down their cudgels, shake hands across the aisle, and find themselves united in love and admiration—and, on the Indian side, even wistful envy.

Coke Studio hit airwaves in the summer of 2008. Its executive producer Rohail Hyatt was one of Pakistani pop’s early legends, an under-19 Rawalpindi cricketer turned singer turned impresario. “It had been done before in a couple of other places,” says filmmaker Nofil Naqvi, who worked with Hyatt and his wife Umber, “but never on such a large scale.” The show, similar in spirit to the British performance series Live from Abbey Road, offered a series of live sets featuring fresh combinations of musical acts.

The five episodes of its first season, shot over four days in February 2008, became an instant hit. It featured such remarkable collaborations as a rock-raga fusion of Garaj Baras between Ali Azmat, former lead vocalist of rock band Junoon, and Rahat Fateh Ali Khan, who had sung the original for the 2007 Bollywood film Paap, and, a remodelled version of Duur, the Strings megahit, with its melody redone by the band along with Ustad Hussein Baksh Gullo, a classical vocalist, under Hyatt’s supervision. Other unusual combinations were to follow.

AND THEN CAME SEASON TWO

Says Naqvi, “2009 was a dark time for artistes. Safety concerns within the country were rising. It was a very different atmosphere from the one during the last military dictatorship, when security was easier to handle for concert venues and live acts. Also, business in India had dried up in the aftermath of the November 2008 attacks, which was an even more serious financial hit.”

Defying the gloom, Coke Studio pulled out all stops. Thankfully, the success of Season One had helped the show secure a deal that let it air simultaneously on every major TV network and radio channel in Pakistan. “Back during Season One, the only other friend who knew about it was an RJ,” remembers blogger and Coke Studio enthusiast Ahmer Naqvi. “But I vividly remember the first episode of the second season. My wife and I were driving and we didn’t know what show was on, but when we started listening to it, we were ecstatic.” The episode featured some of Coke Studio’s biggest hits, including eclectic covers by reigning pop stars Ali Zafar and Atif Aslam. “No one really could imagine either of them doing such versatile stuff,” says Ahmer. Of the two, Atif Aslam is a habitual winner of Indian fans, a Subcontinental superstar whose songs for Ajab Prem Ki Ghazab Kahani have stormed playlists since late 2009.

The show did face some upturned noses, though. “The presence of a corporate logo, plus teeny-bopper singers, put many music purists off,” says Ahmer, some of whose friends couldn’t stand the show at the time. But the lid had blown off the phenomenon. Aslam covered Nusrat Fateh Ali Khan, and Zafar sang Punjabi folk, a far cry from what their usual fans would’ve expected.

For many Pakistanis, it was a reaffirmation of a long-held belief: their country made kickass music. “Music is perhaps the only area in the arts where Pakistan produces world-class stuff regularly and which gets local appreciation,” Ahmer says. “Coke Studio got the kind of response that authors, filmmakers, and drama serial producers would die for.”

In addition to blanket broadcast coverage, the show’s music and videos were instantly downloadable for free on the Coke Studio website. In cities and towns, in homes and along highways, on vehicle stereos, radio channels and mobile phones, there was no resisting the music anymore. Crucially, it soon suffused the desi diaspora worldwide. Word spread. The official Coke Studio fan page on Facebook has just under 300,000 fans, and the official YouTube channel—the videos, of course, proliferate via other IDs too, often with English subtitles or interspersed with portfolio shots of stars—counts some 8.5 million views. This may seem modest in the internet-savvy US, or even in India, especially in contrast with the traffic anything Bollywood generates, but for music thought to have only niche appeal, it is quite something.

Writing in Financial Times shortly after news of this monsoon’s floods started to bubble up in worldwide media, the novelist Mohsin Hamid earnestly examined the possibilities of hope for Pakistan: ‘Hope takes many small forms. One of these is Coke Studio… It is part of a vast and downloadable music scene… I have heard its songs as the ringtones of people ranging from bankers and shopkeepers to carpenters.’

SEASON THREE AND BEYOND

Now three seasons down, Coke Studio has dealt with extremes of popularity and backlash. Many habitual downloaders and caller-tune aficionados did not like the last season—too esoteric for some, too pedestrian for others. But the music industry isn’t complaining yet, and musicians are content to be philosophical. Omar Bilal Akhtar, vocalist of Season Three rock performers Aunty Disco Project, says, “Obviously, with such massive exposure we get some pretty extreme reactions, but we’ve made more new fans than we could ever have imagined. Being on Coke Studio also lends a degree of credibility to being a musician in Pakistan. Before CS, if you told someone you were in a desi rock band, you got sympathy or condescension. We actually get people calling us back now.”

It’s not hard to extrapolate a future of eventual doom for such a monolith of cultural capital. How long before artistes who don’t make it to the show start looking for alternative platforms? How long before networks revolt against the tyranny of its distribution model? How long before last month’s ‘more-of-the-same’ murmurs turn into ennui?

Akhtar offers an insider’s perspective of the benefits that offset these questions. “First, it has definitely raised the bar in terms of quality. We have artistes really pushing themselves to capture the audience’s attention. CS has paved the way for experimentation. Popstars can sing with folk musicians, young female rockers can cover classic folk songs, song lengths can be greater than 3.5 minutes. Second: it has improved standards for artistes themselves. I have never encountered the kind of professionalism nor seen the kind of equipment that was used in CS anywhere in Pakistan. Having worked with the best, mainstream artistes can now demand higher standards from the people around them, whether it’s media promotion or audio engineering or recording.”

Third, and perhaps most significant right now, “There has been a resurgence in ethnic Pakistani music. It has always been one of Rohail’s goals to promote indigenous music. He’s introduced my generation to our own country’s music in a non-pedagogic, refreshing way. It’s cool to like folk and qawwali music now.”

Akhtar and Aunty Disco Project may enjoy the cult status that all good rock acts aspire to—their CS song, Sultanat, is outrageously catchy—but as with the rest of the Subcontinent, this is far from mainstream. The real revolution occurred in Hyatt’s turning the spotlight on genuine fusion. It is by no means unheard of in the Subcontinent, thanks partly to AR Rahman-era Bollywood. But no matter how edgy film music gets, it is always grounded in its context: it is meant to be a background score for a movie and its stars. By its very nature, fusion in film music is a metaphor for popular acceptance, and the success of Rahman and his colleagues rests unabashedly on that. To imagine the effect of, say, that Strings-Ustad Gullo collaboration, Indians cannot rely on the sound of their movies. They will have to refer to their own live scene and its long-time experimenters like Shubha Mudgal or Ustad Sultan Khan, Indian Ocean and Mrigya. That platform is vibrant, thankfully, but also limited in its reach.

By putting fusion front and centre on Pakistani prime-time TV, Coke Studio has changed the rules of engagement with an older tradition of Subcontinental indie art. Hyatt and his snazzy studio equipment may have rearranged the framework, but it’s still the voices of Sindhi fakirs such as Fakir Juman Shah and words of Waris Shah and Bulleh Shah wafting out of speakers—louder and clearer than ever before.

And it is this sound that transfixes YouTube trolls, sustaining a muted but momentous conversation in India since last year’s breakout season. Rabbi Shergill’s 2004 version of Bulleh Shah’s Bulla ki Jaana, some five years after Junoon’s, was a genuine crossover hit and a rare instance of pop fusion achieving overwhelming mainstream acceptance, even if its historical context was lost on vast numbers of the uninitiated.

In contrast, Coke Studio’s music hints at a much larger shared space. At last year’s TED India conference in Mysore, Pakistani delegates liberally handed out Coke Studio CDs to Indians. Today, fans continue to discover and re-discover music through social networks on the internet. Such netizens are partially deaf to the sound of televised musical contests produced in Bombay, sceptical of MTV, and quite critically demanding of the output of Bollywood and urban indie alike. Coke Studio’s folk throwback opens up new vistas for these listeners in much the same way that an array of bands from Junoon to Strings put Indian fans in touch with Pak-rock’s astonishing range and accomplishments.

“The show allows Pakistanis to present an image of themselves to the rest of the world,” Ahmer says, “One which is simultaneously modern enough to be admitted to the pantheon of international standard productions, and yet also fiercely embraces local music and peace-loving lyrics of tolerance, so that those nagging questions about identity can be put to bed by both secularists and Islamists and everyone inbetween.”

It is possible to stumble on a YouTube gem that records Nusrat Fateh Ali Khan’s rendition of Kalam-e-Bahu and be enraptured by an artefact from a notionally common past. But to hear part of the same text in a glitzy rock performance of Alif Allah: Chambey di Booti by Arif Lohar and Meesha Shafi is to relate to the same  syncretism in a language that is still mutually understood. It is not the equivalent of Pakistanis watching Hindi films, or the two countries meeting on the cricket field—it is an awareness that predates both those forms.

It may make the question of ‘why we don’t have this in India’ seem urgent to Indians, but it also makes it banal and a little irrelevant.