How India should respond to China 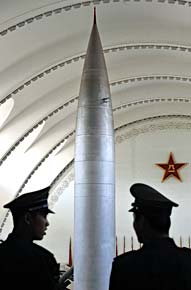 India needs a China strategy. Here’s how India should respond to the threat posed by its powerful neigbour


India needs a China strategy. Here’s how India should respond to the threat posed by its powerful neigbour.

Talk peace but prepare for war

India must build more muscle. The Western sector is vulnerable. The country needs to be prepared for a strategy of limited war with an ability to stand its ground. Some of this is already happening. India is raising two new mountain divisions. It is upgrading infrastructure in both Sikkim and Arunachal Pradesh. It has reportedly based frontline Su-30 fighters (two squadrons) in Tezpur, Assam, and is placing another one in Jammu & Kashmir. The IAF will soon place an order for 126 new-generation fighter jets.

The Indian Navy is acquiring long-range spy aircraft from the US as well as a nuclear-powered submarine and another aircraft carrier, besides six missile destroyers from Russia, over the next three years.

Deterrence does not work without capability. India has very little by way of a credible nuclear deterrent against China. Our missiles as well as fighter planes are vulnerable to a Chinese first strike. India has a declared ‘no first use of nuclear weapons’ posture. Thus we are assuming nuclear-strike survivability. Without submarine-based nuclear missiles with a range of 5,000 km, China is unlikely to be deterred.

India foolishly gave in and declared that Tibet is an ‘autonomous’ part of China. However there is a premise: Tibetan autonomy. No autonomy, no Tibet. India has never compromised on the line that China has no historic claim on Tibet; it has only recognised that as things stand, Tibet is an autonomous part of China. India should keep Tibet open. A beginning can be made by not rounding up random Tibet protestors at the drop of a hat. China is waiting for the death of the Dalai Lama, but India should make it clear that His Holiness has declared that his “reincarnation” will not be born in Chinese-occupied Tibet.

India must take the diplomatic lead and create an alliance of democratic maritime powers. The systemic challenge to China will be posed by democracy. Its totalitarian regime must be made to face pressure from the US and India, with democratic partners like Australia and Japan, through institutional mechanisms including the United Nations.

There is a lot to learn from China, a country that in just 20 years has risen like a colossus. Learning can come from its manufacturing model, its emphasis on infrastructure first and inviting industry later. India can inculcate China’s ability to execute grand projects on time. India could gain from understanding the work ethic of the Middle Kingdom.

Build on the US partnership, but do so cautiously—do not annoy China

The next big development in world affairs could be the momentum of the Indo-US Nuclear Deal. India needs the partnership. However, at all points it should be made clear that the containment of China is not the bilateral reason for this relationship.

Develop China in the Indian mind

China, for all its threat and size, is singularly absent from the Indian mind. Indians do not know much about this country except for a vague sharing of a cultural past. This must change. More Chinese language schools and people-to-people exchange are needed. China may not play ball, of course. They would not like to be exposed to Indians and their dangerous ideas of freedom, free press and democracy, now would they?