The Internet was welcomed as an information superhighway, but has it ended up jamming our brains instead? 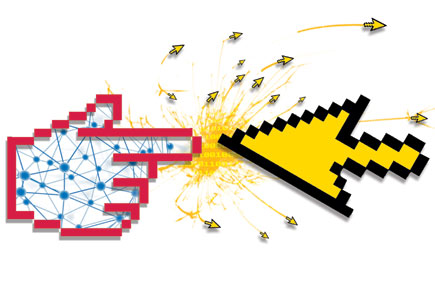 The Internet was welcomed as an information superhighway, but has it ended up jamming our brains?


When a paradigm-shifting revolution is underway, chances are the old guard will resist it. They will prod, peruse and pry it open for ritual’s sake. Socrates did it to writing; disgruntled monks muttered ‘heresy’ under their breaths at Gutenberg’s invention. The detractors were proved wrong eventually. The rest, as we know, not only revolutionised history, it also gave the modern age access to history.

Today, detractors still abound and they’re meting out the same treatment to the Internet. But this time around, perhaps they are right.

Bruce Springsteen’s 1992 song 57 Channels (And Nothing On) may have been written in a different context, but it describes the Internet quite accurately. As does Richard Foreman’s play The Pancake People (or The Gods are Pounding My Head), which reflects the anguish of its creator over the numbness and immobilisation caused by an excess of information and choices.

The Internet is only one of many information wagons, but no one would disagree that it is the biggest one created yet. A network so far-reaching, it is set to change the course of mankind in ways unimaginable by anyone in the past.

Maybe it already has.

But herein lies the problem. The more we interact with this new medium, the more it shapes us towards its own means and ends. In the days when words were set-in-stone, we were free to take our time with them. When books became common currency, they developed habits and patterns in our minds that expanded as well as focused our intellectual abilities.

The Internet, on the other hand, is gradually rewiring our minds, and rewarding us for fleeting awareness as opposed to genuine thought.

So far, the potential for harm on the Internet was confined to its facilitation of pornography, plagiarism, introverted behaviour etcetera,” says Maitrayee Chaudhuri, professor of social sciences, Jawaharlal Nehru University, Delhi, “The problems have become more nuanced now. Because it follows a model that believes in efficiency, the Internet has eroded the value-laden processes of contemplation.”

From being a boring academic tool for researchers, the Internet has emerged as the most powerful pop-cultural medium of our times. It has tamed markets, discovered talents, saved lives and made them easier. And that was the good part. Today, we’re dealing with too much information. Megacorps have emerged to cull the facts and deliver them. But that’s not all.

Alas, not. Nicholas Carr, former editor of Harvard Business Review, makes the argument that despite being a blessing, the Internet has also shaped his mind into accepting information as a swiftly moving stream of particles, in contrast with the nuances of complex prose found in a book. Snatches of data are crowding out true understanding; this may or may not offer rewards, but survival in the information age demands it. “In a shallow model such as this,” Carr argues, “social and economic success won’t require much concentration, contemplation and reflection, and hence, those qualities of the mind will erode.”

Stephen King feared that thesauruses, reference books and dictionaries would ruin writers by disrupting their train of thought. He need not have worried; we have the Internet for that.

It turns out that there is a fundamental conflict between the way our minds were evolutionarily programmed to process information and the way the Internet feeds it today.

Dr Rajni Palniwala, head of department, sociology, Delhi School of Economics (D-School), says multitasking is the bane of today’s youth. “Chatting, checking out profiles on networking sites, skimming through information on Wikipedia or just generally stumbling upon it are done simultaneously, which comes at the cost of focus. Our brains are wired to do one thing at a time. More than one activity will bring down the quality of all,” says Palniwala.

In the field of education, all this has translated into a curious malaise among some students. Deepak S Lal, a student of sociology at D-School, says his attention span varies according to the company he is in. “I have no problem concentrating if there is a group discussion and I am an active member,” says Lal. But when in class or left alone with a book, it’s an effort to stay focused. That’s not all. The reducing space for thought also inhibits us from exercising our power of reasoning. “Instead of juggling around with concepts and letting them settle down in your mind, new media promotes a horizontal mode of learning,” observes Dr Shankaran, professor of philosophy, St Stephen’s College, Delhi.

Do we really have the Internet to blame for this? One could make the case that online information goes by follow-the-link patterns. Ruminating on what is being read allows the brain to form new neural connections. But simply clicking a link to obtain more information also puts the grey cells into complacency mode.

Dr S Anandalakshmy, a cognitive psychologist from Chennai, says, “Spending six or more hours on such a fast-paced, multi-sensory medium everyday can have a crippling effect on the development of imagination and can make the subjects less attentive.” She fears children today are leading a vicarious life through television, Internet, iPods and video games, which could fundamentally alter their development.

If none of this seems instantly evident, it may be because the evidence is masked by superficial skills. Nina Saigal, principal, Delhi Public School, Noida, says that while students nowadays are articulate and better informed about the world, they are also determined go-getters. “At the same time, you can’t help notice the difference,” she laments, “They’re well informed but not well read.” It’s true that the Internet has led to the creation of many more readers, and hence more literacy. But literacy is not what this debate is about.

Dominated by the instant excitement offered by websites, this generation will very likely live in the here-and-now, lacking the structure of narrative form and absorption of thought offered by a book. Susan Greenfield, a neurologist and author of the book iD: The Quest for Identity in the 21st Century, illustrates the point with taxi drivers in London. Known for their ability to remember the streets like the back of their hands, their brain scans showed an overdeveloped hippocampus, the part of brain responsible for spatial aptitude. This demonstrates the ‘plasticity’ of our brains, something aided by the mental exercise involved in reading.

Could the brain prove adaptive to its new electronic environment? Is this what it’s about? Perhaps. “As evolutionary beings,” says Mina Bobdey, a developmental psychologist from Pune, “we’ve learnt to adapt well to any new circumstance. Books helped us to concentrate and take in matter in long strokes. The Internet is paving the way for page-based growth.”

Everybody must adapt. Most newspapers and journals have online versions. Online bulletins deliver relevant news efficiently: news ‘optimised’ for search engines to grab. Yet, this can’t hold a candle to a panoply of words served on paper for the curious reader to chance upon. “When I pick up a newspaper in the morning, there’s more to it than just the headlines. I may not want to read everything, but there is something called serendipity, which a selective reading of online journals can never replicate,” says Dr Shankaran.

Selection of information calls for special expertise. But here too, perceptions are being altered by the Internet. A few years ago, everybody knew of somebody as the last word on movies, music or books. These walking-talking encyclopaedias still exist, but why bother with them when we have Wikipedia? Now everybody with Internet access can be an ‘expert’. There’s nothing wrong with that, says Dr KP Jayashankar, professor, sociology, Tata Institute of Social Sciences, Mumbai, so long as you know how to engage such devices.

Wikipedia is often welcomed for having enriched the average Joe’s awareness. However, its reliability stands and falls by that of its anonymous contributors. While it sounds democratic to have ‘knowledge’ put together and edited/re-edited by as many online volunteers as are willing, on the assumption that it will come to form a usable approximation of accuracy, it also means that what you get is the outcome of popularity, not necessarily objectivity. Think about it. Some centuries ago, Wikipedia—or popular perception—would have called the world flat (now only bestsellers do). And it’s not just the lack of factual rigour. Critics complain about what they see as a bland homogenous digital mass, ‘Facebooked’, utterly devoid of any diversity in perspective.

That is why it is important to see the Internet for what it is: a tool, and an imperfect one at that. “The Internet can only provide information, and maybe knowledge to a less extent,” says Dr Jayashankar, “The other two elusive parts of intellect—understanding and wisdom—have to be formed outside the Internet.”

Just keeping our minds free of excessive Internet influence might be all it takes to insulate it from the medium’s ill effects. But influence, let’s admit, there will be plenty of. As Wikipedia founder Jimmy Wales once said, “It’s the next billion [Internet users] who will change the way we think.” He could easily be proved right. The next billion will have their own set of skills, talents and interests, which would be welcome. Will they also think in utterly new ways? Would this be equally welcome? Think it over. I realise that however subversive all this may seem, it’ll never recreate the aura of a Bob Woodward typing away at his typewriter, in All the President’s Men.

The analog world had a certain charm, and there are many who would like it to endure longer into the future, if not forever.

Perhaps the best guarantee of the survival of books is that they reflect our human existence best. Susan Greenfield nailed it. “When you play a computer game to rescue the princess, it is the experience that counts: you don’t care about the feelings or thoughts of the heroine,” she says, “When you read a book, the princess’s welfare and fate is the whole point.”