“Do not let others define you”

The managing editor of TwoCircles.net, an English news website for Indian Muslims, speaks to Open on what makes his website unique. 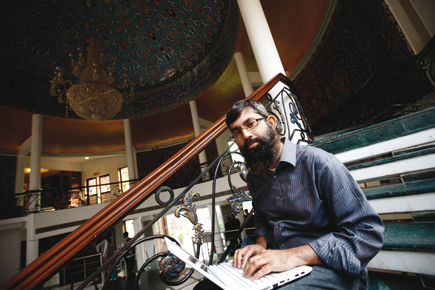 The managing editor  of TwoCircles.net, an English news website covering Indian Muslims, speaks to Open on what makes his website unique.


A young scientist based in Cambridge, Kashif-ul-Huda is also managing editor of TwoCircles.net (TCN), an English news website launched in 2007 to challenge the stereotypical coverage of Indian Muslims in the mainstream Urdu press and English media. First noticed for its coverage of the 2008 Batla House encounter, TCN attained a new profile in June 2010 when an advertisement put out by the Gujarat government, projecting happy and prosperous Muslims in Gujarat, was revealed as a picture from Azamgarh, Uttar Pradesh, lifted directly from TCN. On a recent trip to India, Kashif-ul-Huda spoke to Open on what makes his website unique. Excerpts:

On defining the Indian Muslim

Everybody is aware of the problem of Muslim representation in the media. We often complain that it ends up reinforcing a stereotype. Being a community media, the question of the image of the Indian Muslim is something we have to… think about. So I asked the Muslim community: what is the appropriate image of the Indian Muslim? This is a difficult question and I don’t think Muslims have answered it well.

Indian Muslims are a very complex and diverse community. There are multiple sects, a myriad ideologies, with different levels of understanding and practice [of Islam]. So there is no one image of the Indian Muslim we can present… The way we do it is to present the many different faces that exist.

For that, you need access. As young people, it is our challenge. Do not let others define you, define yourselves. What does being Indian, being Muslim mean? If you don’t define yourself, somebody else will. You have to do it first. TCN is an experiment in trying to define ourselves.

TCN is a community media initiative that focuses on Indian Muslim issues and their stories. We are not pro-Muslim. We are Muslim-focused. We are not here to promote anyone’s agenda. We are not an Islamic website. We are a Muslim news organisation.

The mainstream media does not devote the time and space needed to show the complete picture. Usually, Muslims tend to hit the headlines in negative contexts—terrorism, fatwa, backwardness… So we said, ‘We need to read Muslim stories in a positive context. Not just for the community’s sake, but for the nation’s sake.’

We are often critical of our leaders… And we want to be more critical of trends in the Muslim community. We are not here to say that there is no terrorism or radicalism. While community media tends to get emotional and sectarian, or uses religious terminology, we avoid that.

Our reporter was on the ground when the encounter happened… Many fact-finding reports mentioned our stories. Before Batla House, it was the poor Muslim who was being picked up. Now, educated people working in big companies, engineers [and] doctors were getting picked up. The community is definitely scared. There are anecdotal reports of people shortening or changing their names in their friends circle because they don’t want to be identified as Muslim. TCN hopefully is a counter to that—by positively asserting the Indian and Muslim identity. Hopefully, that will catch on.

On the Gujarat government ad controversy: The photo was taken by our reporter Mumtaz in Azamgarh. He went there in the aftermath of the Batla House encounter. It was a time when Azamgarh had been labelled a terrorist hub. Although we were there in the context of terrorism, some really positive images emerged from Azamgarh. And somebody [Narendra Modi] who has blamed the entire community for terrorism didn’t hesitate to use our picture when he wanted to portray a positive image of the community.

For example, on the Indo-US Nuclear Deal, everyone from Mayawati and Mulayam Singh to the Congress and CPM had an opinion on whether Muslims wanted the deal or not. But no one asked the average Muslim his opinion. It is a complicated issue, and so we spoke to people who had some understanding of the issue. We asked them whether they support the deal and why. It was a 50-50 divide… Those in favour said it was good for India, and those against said it was bad for India. Nobody made a religious argument or said that they hate America… That surprised us too. The public perception is that Muslims think only on religious lines…

There is a perception that it was the Mughals who brought Islam to India. This is not true. Islam’s second or third oldest mosque is in Kerala. Right after Islam came to Arabia, it hit the shores of Kerala… I did a ten-part series on education, politics, and so on. The idea of such stories is for people living in other parts of India, both Muslim and non-Muslim, to know our history.

A very popular segment on our website is the performance report of Muslim MPs. And so we started tracking them—how many questions they asked, their participation in debates. Since we started the segment, the number of questions they ask has gone up significantly. It was 60-70, the first time. The second session, it went up to 200… The third time, it was 400.

An analysis piece, ‘Everybody loves a bad fatwa’, generated a lot of debate. A lot of journalists wrote to me after that. I read a Times of India headline about a [Deoband] fatwa which declared that women working was ‘haram’. People with an Islamic background can tell you that this is not possible… So I went through the fatwa… [and] did a story on it and how it had been reported. I wrote another piece analysing fatwas randomly picked out of the Deoband website. Most of them were harmless. About 30 per cent were focused on women. Again, unlike how it is projected in the media, issuing fatwas against women is not their main preoccupation.

We have ads on the site. It is a community-funded website. The community in the US contributes to it. We have no overheads. We work from home. We are not making any money.