Death on the Nile

Egypt’s date with democracy still looks faint on the horizon 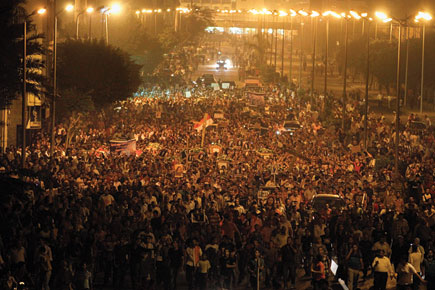 Egypt’s date with democracy still looks faint on the horizon


CAIRO ~ At first I just heard the chanting: “The people demand the fall of the Mushir (Field Marshall Hussein Tantawi).” A slight variation on the ubiquitous refrain during Egypt’s spectacular 18-day uprising in January and February, “The people demand the fall of the regime,” this version targets the leader of Egypt’s ruling Supreme Council of the Armed Forces. It has slowly gained popularity since March, when the ruling military council first began dispersing protests with force and trying civilians in military courts, and now, can be heard on a weekly basis in downtown Cairo as small groups of people protest against military rule. But this time it was much louder than usual. As I rushed out of my downtown Cairo apartment, the gunshots began. And then, loud unmistakable screams for help rang through the rush hour traffic. The screams continued, louder and louder until they mingled with gunfire, and black smoke from a burning vehicle began to rise above the crowds running between the Nile and the Ramses Hilton luxury hotel.

Within a few hours, it became clear that 9 October was going to be the bloodiest day in Cairo since the uprising that toppled the 31-year-long dictatorship of Hosni Mubarak. It began as a non-violent march led by a large group of Copts—Egypt’s Christian minority, who make up some 10 percent of the population—from the working-class neighbourhood of Shubra to a waterfront area by the state television building known as Maspero. They were protesting continued discrimination and a recent attack on a church, the fifth this year, and the almost complete impunity the perpetrators have enjoyed. Despite their grievances and anger over lack of protection from the military, the march was unarmed and largely peaceful for the first two hours. By the end of the night, however, official figures put the death toll at 24, and the number of wounded in the hundreds. “It started with flowers and crosses and ended with blood and corpses,” said Malak, a young activist who was part of the protest.

Many experts were quick to pronounce this as yet another case of exploding sectarian tensions in Egypt, fuelled by the growing influence of Salafists on the one hand and increasingly strident pro-American Copts on the other. They inveighed against foreign meddling and entreated Egyptians to control their sectarian impulses, and support the country’s military rulers and their promises of stability and security. But few who witnessed Sunday’s violence believe it was simply an expression of sectarianism. For a people who had trusted the military to protect their hard-won revolution, what it pointed to was potentially more devastating—an army that was killing its own people.

Sarah Carr, an Egyptian-British journalist, gave a harrowing first-hand account of what unfolded as the march neared Maspero. “As we turned the corner, soldiers driving an armoured personnel carrier (APC) started zigzagging through the crowd at 60 kmph, and all the while there was constant gunfire.” She ran up a nearby ramp only to see a second APC rush through the terrified crowds and drive over a street divider, crushing a dozen people under its wheels. “I thought they were going to kill us all, either run us over or shoot us.”  Another eyewitness, Sherief Gaber, described the attack by the military vehicles as the most horrific thing he’d seen: “It looked like they were deliberately trying to hit people,” he said.

This is the first time the military has directly engaged in killing protestors, its blatant manner reminiscent of the tactics of Mubarak’s hated security forces. Enraged at the scale of the attack, many of the protestors fought back furiously, throwing stones at army vehicles and setting one on fire after capturing its driver. As ambulances carried away the dead and wounded, the army and military police, now gathered on the bridge above, began lobbing tear gas canisters into the crowd below.

In the midst of this panicked scene, Egyptian state television, headquartered in the very building around which this violence was unfolding, took on a decidedly sectarian tone. Television broadcasters announced that armed Coptic protestors were attacking the army and that three soldiers had been killed. Commentators urged “honourable citizens” to go out and “protect the army from Christians”. Anyone who said that the army was responsible for the clashes was quickly cut off. The military then raided the offices of at least two private television channels that showed images of the clashes, forcing them to abruptly stop their live broadcasts. “It was a shameful performance and simply reinforces one of the main demands of the revolution—a radical overhaul of state media,” said Lina Attalah, editor of the independent Al-Masry Al-Youm’s English edition.

What followed was a tragedy foretold and for which many believe state television bears some responsibility. Over the next few hours, hundreds of young men, armed with sticks, rocks, Molotov cocktails, and in some cases, firearms, descended on downtown Cairo, looking for Christians. Some appeared to be working closely with the army and military police. As a group of people chanting “Muslims and Christians are united” approached my street, dozens of young men suddenly appeared, and began pelting them with rocks, shouting, “The people demand the fall of the Copts.” When the protestors retreated  and hurled rocks back, the young toughs rushed at them again, yelling sectarian slogans, this time backed by rock-throwing riot police. Filmmaker Omar Robert Hamilton saw a group of baltageya—armed toughs for hire—walking towards the television building in full view of the army. At least one of them, he said, carried a pistol.

Neighbourhood watch committees were also out in full force downtown, carrying anything they could use as a weapon, to keep out “armed Christians.” Hani Bushra, an Egyptian-American Christian, described, in a post on Facebook, being set upon by a group of 30 men near Tahrir Square when he told one of them he was Christian. His phone was stolen and he was punched repeatedly in the head until he was handed over to security forces, the kindest of whom proceeded to tell him to keep his religious identity quiet in order to be safe.

Meanwhile, a few kilometres away, the bodies began to pile up at the Coptic hospital. Eyewitnesses describe a scene of complete devastation; wailing inconsolable relatives and friends, a morgue overflowing with deformed bodies and faces contorted into indescribable expressions, and everywhere, on the floor, the walls, and all over people, blood. Traumatised and injured survivors told reporters that soldiers had treated them like animals.

The next day, as thousands gathered to mourn the dead at the Coptic hospital, people angrily mocked Egyptian Prime Minister Essam Sharaf’s late-night address that blamed the violence on “hidden hands” both domestic and foreign. “What hidden hand is he talking about?” asked a woman in her 60s, mourning her young nephew. “He sounds just like Mubarak. This is not about foreign agendas or sectarianism, the army killed the Copts, that’s what happened.” One man  lambasted the media for inciting sectarianism, and another carried a sign taped to a cross: ‘The army committed a massacre and the media is covering it up.’

Inside the hospital compound, I met Akram, a 36-year old technician, standing over the coffin of Mina Daniel, a charismatic young blogger and activist he befriended during the revolution. “I’ve been at every Coptic protest since the revolution,” he said, “and I am a Muslim,” he added. Tears streaming down his face, Akram described how Mina had been one of the heroes of the uprising, fighting back Mubarak’s hated security forces. “He was in Tahrir Square the whole time and he survived the attacks by Mubarak’s thugs and police. But the military and their thugs, God have no mercy on them, they got him in the end.”

The available evidence thus far has only strengthened suspicions about the military’s culpability for the deaths. Independent autopsy reports on 17 bodies confirmed that the primary causes of their deaths were live bullets and being crushed by vehicles. Rumours abound of corpses being dumped into the Nile and others stacked in warehouses along the river, but these claims await an independent investigation. Meanwhile, commentators on Egyptian state television quietly refuted the incendiary reports from the previous day about the three dead soldiers, saying that not a single soldier had in fact been attacked or killed.

On the night of 10 October, a funeral procession for those killed the night before drew a crowd of 20,000 mourners — both Copts and Muslims — who repeatedly raised slogans against the military. How the ruling military council deals with the popular rage on this issue is crucial; nothing less than Egypt’s future as a representative democracy hangs in the balance. In January and February, people came out in the millions to force Mubarak to resign. When the military didn’t fire at them, they cheered in gratitude, chanting, “The army and people are one hand.” In the months that followed, though a small group of activists consistently criticised abuses by the army, the majority seemed fairly content to trust the generals with steering Egypt’s transition to a civilian democracy. Sunday’s attack, however, has created a far larger crisis of credibility for the military. On Tuesday, Egypt’s Deputy Prime Minister Hazem al-Beblawi tried to resign, citing the deteriorating security situation and “government’s mishandling of Maspero”, but the military rejected his attempt. Unless the ruling military council responds to the legitimate grievances of people and openly addresses its own failings without trying to hold on to power for much longer, the underlying discontent with the military could boil over, with devastating consequences for both Egyptians and their rulers.

Anjali Kamat is an independent journalist and correspondent for the  TV and radio show Democracy Now!