Min Ko Naing has just received the Gwangju Prize for Human Rights. Often seen as Suu Kyi’s political heir, he is serving a 65-year term for organising the 2007 uprising against the junta 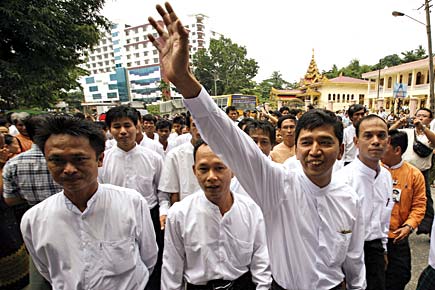 
HE IS NOT as well known globally as Daw Aung San Suu Kyi, but among the people of Burma, Min Ko Naing’s name evokes equally deep reverence. On 18 May, when this former student leader—now serving a 65-year jail sentence—was awarded the 2009 Gwangju Prize for Human Rights in South Korea, there was much applause from Burmese pro-democracy activists all over the world. Within Burma, thanks to severe restrictions on dissemination of news, the reaction is yet to be gauged.

The award, given by the non-profit May 18 Memorial Foundation, includes a gold medal, a certificate of achievement and Korean Won 50,000,000. It has been awarded every year since 1994—Suu Kyi was the first recipient—in memory of an armed uprising in 1980 by citizens of Gwangju, a city in the western part of South Korea, against then military dictator Chun Doo-Hwan. It’s an event that many South Koreans believe inspired the country’s pro-democracy movement, which in 1988 forced the military to give way to an elected civilian government.

“It is a privilege for us to select Min Ko Naing for this prize as he represents the spirit of the Gwangju uprising in the extremely repressive Burmese context,” said Chanho Kim, director of the May 18 Foundation. “We see we are not alone in our fight against the military regime in Burma and my colleagues will be much strengthened by this gesture,” said Aung Myo Myint of the All Burma Federation of Student Unions (ABSFU), accepting the award on Min Ko Naing’s behalf.

Min Ko Naing, whose name means ‘Conqueror of Kings’, was one of the first to be arrested for his role in the ‘saffron uprising’ of 2007, when thousands of monks took to the streets against the junta. Earlier, as leader of the banned ABFSU, he had already served 18 years in prison. The ABFSU had a key role in the 1988 nationwide revolt.

Observers say the sheer courage represented by Min Ko Naing, and the fact that he chose not to go into exile, makes him Burma’s most popular leader after Suu Kyi. “If Suu Kyi is the Nelson Mandela of Burma, then Min Ko Naing is certainly the country’s Steve Biko,” says Jeong Moontae, a South Korean war correspondent who has covered Burmese politics for the past two decades.

Min Ko Naing is also respected as a strategist, something the Burmese pro-democracy movement has lacked for long. In October 2006, he set the stage for protests by Buddhist monks the following year by launching ‘White Expression’, which called for freedom of political prisoners together with ‘national reconciliation’. Students urged people to show their support by wearing white clothes or, at least, white handkerchiefs, brooches or badges. ‘Whiteness’ represents purity, sincerity, honesty and altruism in Burmese culture. It was a simple act of protest that even ordinary Burmese, fearful of the regime, could participate in. The campaign was a success.

“There is no other leader of similar stature within the Burmese pro-democracy movement today. He is seen as the future successor to Aung San Suu Kyi,” says Aung Naing, a Burmese journalist and former student activist.

In recent months, though, there’s been growing concern about his health. “He is in poor health as a result of harsh prison conditions. His eye condition has worsened. His hands are numb and difficult to move. The new prison, which is in the north-east of the country, is cold and damp, and this is also understood to be adversely affecting his health. Very little medical treatment is available at the prison,” said an Amnesty International report in March. “There is no doubt he is being subjected to special harassment by the regime, fearful of his potential to rally the Burmese people together,” says Aung Naing.

However, as the Gwangju prize shows, even from the confines of a dark prison, the legend of Min Ko Naing continues to inspire people.