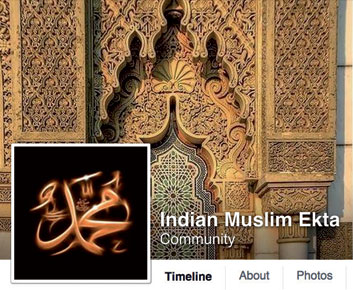 
The 7 January terror attack on Charlie Hebdo has been described by some Indian politicians as a ‘backlash’ against the French satirical weekly’s publication of cartoons of Prophet Muhammad a few years ago. However, it appears that the ideas that drove the jihadists to kill the cartoonists and editors of Charlie Hebdo are very much alive in the streets of towns across India. A review of Facebook comments made by Muslim youths on the Paris shooting reveals that the geography of this radicalisation in India is indeed wide, fertile and raw.

Soon after the attack, Indian Muslim Ekta, a page on Facebook that describes itself as ‘peaceful for Muslims and Non-Muslims’, posted a news report on the killing of 12 people in Paris. Within five days, it had 1,245 ‘Likes’, mostly by Indian Muslim youths who appear to be in their teens and twenties, though there were others of relatively mature ages as well. A study of nearly 400 comments, mostly in Roman Urdu, posted on this page raises a serious question over what Islamic scholars in India are teaching the next generation of Muslims. It also reveals a wide geography of radicalisation across India.

Naseem Ahmad is a teenager whose moustache is just beginning to grow, as seen in his profile photograph. He wrote: ‘All praise be to Allah; very pious deed was done; glory be to Allah; heart was gladdened.’ Sohaa Ali, a hijab– wearing woman who lives in Jaipur, commented: ‘Very good news’. Rajib Ali, a youth in his thirties and based in the Assamese town of Tinsukia, wished the Paris attackers safety: ‘May Allah protect those who killed.’

Faiz Anwar, who lives in Mumbai and claims affiliation with the All India Majlis-e-Ittehadul Muslimeen (AIMIM), narrated a story in which a man came to ask Abdullah, son of the second Islamic caliph Umar ibn Khattab, for a fatwa (Islamic decree) vis-a-vis a person who had committed blasphemy, to which Abdullah reacted with anger: “You have come to ask for a fatwa, why didn’t you first kill him?”

Masoom Ahmad, who is from Pakur in Jharkhand, praised the killers of the French cartoonists, saying: ‘We are proud of those who carried out this act; well done!’ Sameer Ansari, a youth based in the northern town of Kanpur, wrote: ‘Look the people of the world, anyone who speaks about Islam will meet the same end.’ Owaish Sadik, a youth based in Raigarh, Chhattisgarh, commented: ‘12 people/deaths were very less; 1200 should have been killed.’ M Umar Khan, who appears younger than a teenager, expressed this theological view: ‘They had to be punished because God doesn’t like blasphemy of his prophet.’ Sagir Shah, studying for an engineering degree at Gorakhpur, wrote: ‘I am proud of Muslim warriors.’ Jafar Khan, a Mumbai-based youth, observed: ‘If an editor or cartoonist has drawn such a cartoon, then it is a small punishment.’

Ahal Qadri Rabbani from Mungaoli, Madhya Pradesh, wrote: ‘Kill more of these dogs.’ Aadil Pathan, a youth from Ajmer in Rajasthan state, wrote: ‘No doubt, this had to happen. Today, I am so happy… I am proud to be on ISIS. Really, it is a great organisation.’ Mohd Mustafa, a Shimla- based youth whose profile sports a picture of Osama bin Laden, approved of the Paris attack as ‘very good’.

Imran Khan, from Faizabad in Uttar Pradesh, warned: ‘Anyone who thinks wrong about Muslims will be killed in this way. Islam was alive, Islam is alive and Islam will be alive.’ Taslima Noor, a girl from Navi Mumbai who works in the film industry and also identifies herself with the AIMIM, said: ‘Very good; blow up the entire office [of Charlie Hebdo]’.

Of nearly 400 comments, there were just a few on the page of Indian Muslim Ekta saying that Islam does not teach murder. The overwhelming responses from across India were in favour of the attackers. These comments are not geographically isolated. Similar comments celebrating the killings were made on this Facebook page by Muslim youths living in Kolkata, Patna, Chhapra, Nawada, Tanda, Lucknow, Dehradun, Aligarh, New Delhi, Srinagar, Jalandhar, Bhilwara, Indore, Jabalpur, Kheda, Ratnagiri, Jawahar, Nagina, Amravati, Pune, Bangalore and other places.

Among them are engineers, doctors, graduates, school students, both male and female.

The Indian Muslims who posted these comments online are not terrorists, but some observations can still be made about them. They are present across India and there is no difference between their viewpoints and those of the jihadists of the Taliban, Al-Qaeda and Islamic State of Iraq and Syria (ISIS) when it comes to blasphemy under Sharia. It is unlikely that all or even a majority of them will become terrorists, but it certainly suggests that there is a fertile field of jihadist ideas being cultivated by Islamic scholars in India, notions which young Muslims are fed regularly. This is a result of decades of Islamic teachings offered by madrassas. At any point in time and across countries, these ideas can be easily used to destablise a society.

When a head-of-state or dignitary rises to deliver even a short speech before TV cameras, a draft is made beforehand on paper and thought through. But in the Islamic world, it is standard practice for a cleric—who is usually not even a college graduate and lives in isolation from the world of scientific knowledge and media—to deliver hours of unwritten speeches on Islam’s history and politics in mosques, madrassas and religious congregations called jalsas. This is industrial scale influence that Muslim societies are subjected to every week in almost every part of the world, and its consequences emerge in our midst from time to time.

It may be observed in social behaviour across the country, notably when Muslim women stop the practice of singing on wedding occasions in villages; when youths sport ISIS T-shirts and wave its flag in different towns; when a jeans-clad engineering graduate turns up at a restaurant in Delhi’s Connaught Place for a meal with his wife clad in a burkha; when some Muslims join the Indian Mujahideen and plant bombs; when a Muslim decides to chop off the hand of a Kerala lecturer for setting a question paper deemed disrespectful to Prophet Muhammad; when a passenger writes messages in favour of ISIS in an airport terminal toilet in Mumbai; when a non-Muslim is forced to convert to Islam in order to consummate his or her love; when writers are forced to go into hiding; or when cartoonists are killed in cold blood. All these instances point to an all- India phenomenon.

There is no short-cut solution to that gradual process, a first step towards radicalisation for jihad. However, government officials can make an effort to counter it by initiating madrassa reform, regulating mosques and putting in place a zero-tolerance policing system.

All madrassas and mosques in India must be registered and regulated: their sources of funding must be audited by local government officials every year. However, far-reaching changes are required to develop a reformed syllabus which, while allowing the teaching of the Qur’an, Hadiths and Islamic Studies, must include the teaching of English and material sciences as well as the liberal arts right from junior levels.