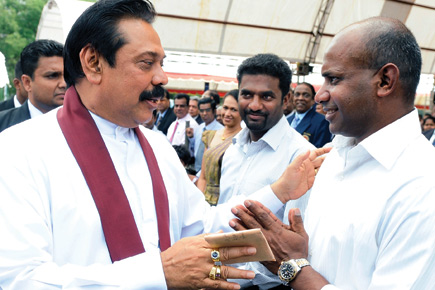 Sanath Jayasuriya and Arjuna Ranatunga will be batting on opposing sides when Sri Lanka goes to the polls.


Sri Lanka is the West Indies of Asia. The sea, green and translucent as a menthol lozenge, is never far. The seafood? Top class. The people seem laid-back though fires may rage within. The country’s cricket venues resonate with a seductive thumping of drums, though, till recently, explosions of a more disturbing kind could not be ruled out.

The drumbeaters were in their element one day in August 2005 at the Premadasa Stadium in Colombo. Sri Lanka vs India in a one-day international. Irfan Pathan to Sanath Jayasuriya. Hook. Four runs. The sound of bat smacking ball could be heard over the stadium’s cacophony. Then the cacophony took over. The shot was not just another boundary for a man who had hit many. It took Jayasuriya to 10,000 runs in one-day cricket. More importantly, it made him the first all-rounder in one-day cricket with 200 wickets and 10,000 runs. Currently, the 40-year-old left-hander’s tally is 13,428 runs and 322 wickets (or ‘wickuts’ as Sri Lankans say).

A few days ago, Jayasuriya’s versatility went beyond cricket. He announced that he was contesting parliamentary elections under the ruling coalition, the United People Freedom Alliance (Upfa), in the south-coast district of Matara, his hometown. The polls are on 8 April. Jayasuriya follows in the footsteps of his mentor, Arjuna Ranatunga, who exchanged cricketing whites for ministerial ones a few years ago. Also contesting for the Upfa is the sprinter Susanthika Jayasinghe. Muttiah Muralitharan and Lasith Malinga have appeared in advertisements supporting Mahinda Rajapaksa, Upfa boss and the country’s president. Entering politics is becoming a norm for Sri Lankan sportsmen, especially cricketers.

“A request came from the president and I gladly consented,” Jayasuriya tells Open over the phone from Sri Lanka. “I want a higher lifestyle for the people of Matara. I want to develop the region.” He was at a political meeting. You could hear somebody making a speech in the background. “Education and sports. These can help the region progress,” he says.

It was inevitable that Jayasuriya, ‘Sana’ to Lankans, would enter politics. He campaigned for President Mahinda Rajapaksa in the last election. He has been active on the public service front since the Tsunami of 2004. Like many Sri Lankans, the event was a life-changing experience for Jayasuriya. Matara was hit. So was his home. His mother Breeda survived because her son was a famous cricket player. She was out buying vegetables at a fair when the waves engulfed her. “I’m Sanath’s mother, save me,” she cried out. Jayasuriya was playing in Auckland, New Zealand, then. He had to spend harrowing hours before communication came that his people, if not his home, were safe.

Jayasuriya and cricket stars from all countries then played a charity match at the Melbourne Cricket Ground, raising Australian $14 million.

In January, Rajapaksa felicitated Jayasuriya, among others, for completing two decades in international cricket. Jayasuriya attended the function with wife Sandra and their three children. He looked like a man content with one phase of his life and ready to begin another. Only his trim waist reminded you that he was still an active player. While Jayasuriya has retired from Tests, he continues to play shorter forms of the game. From a sporting point of view, this is laudable. He is 40 and still good enough. But from the standpoint of his future career, his sporting longevity might be a disadvantage.

“Jayasuriya has a clean reputation, but people would rather he entered politics post-career,” says a senior Sri Lankan journalist. “People are not too happy that he will juggle cricket and politics.”

In fact, he will barely have time to participate in the election. When Sri Lanka prepares to vote, Jayasuriya would be representing Mumbai Indians in the Indian Premier League (IPL).“We are playing in Chennai on 6 April. I will be in a position to fly to Colombo for the polls,” Jayasuriya says. The Mumbai Indians’ next match is on 9 April.

Mention the doubts that people have and Jayasuriya’s speech acquires a hint of impatience. “People know that I’m doing this (politics) in between,” he says. “I will manage it.”

Who does he look up to in politics? Expectedly, Jayasuriya mentions Rajapaksa. Does he have international political idols? Gandhi? Martin Luther? “Not really. There are some Sri Lankan leaders I admire,” he says.

The fascinating aspect of Jayasuriya’s latest experiment is his clash with Ranatunga, who was an Upfa man but is now on the other side with the Sri Lanka Freedom Party (SLFP). The SLFP has formed an alliance with the Janatha Vimukthi Peramuna (JVP) and will contest the polls under the banner of the DNA (Democratic National Alliance). Their election symbol is the trophy. The Upfa’s is a betel leaf.

The only cricketer ever to combine his morning walk with running when inconvenienced to cover the 22 yards between the wickets, Ranatunga is also a father figure in Sri Lankan cricket. His strong captaincy and personality in vicious cricketing environments like Australia were instrumental in making Sri Lanka the world champions and a cricketing heavyweight. Jayasuriya now has to compete against a man that he, as indeed all stars from the nation, are indebted to. Luckily, the two will not be directly pitted against each other. Ranatunga will contest from the Gampaha district in west Sri Lanka. Yet, the fact that they represent different political parties is intriguing. After all, the leader of Ranatunga’s party, General Sarath Fonseka, is the chief adversary of President Rajapaksa.

Ranatunga has disapproved of Jayasuriya’s decision to be a politician while he is still a player. He has challenged him to a television debate. Yet, it will be difficult for Jayasuriya to get into a scrap with Ranatunga. A senior journalist says, “Ranatunga has nurtured these guys. He has put them up in his house when they did not have a place to stay.” Yet another journalist who has known both says, “There is no doubt that Ranatunga has been a mentor to Jayasuriya, but there is no saying what will happen to their relationship in the political battlefield. Power can change people.”

There is no disagreement, however, that Jayasuriya has much to learn from Ranatunga. Ranatunga is a natural leader, while Jayasuriya was a reluctant captain. For a man who did not enjoy leading his team, he will have to reorient himself to lead the people of his district.

Like in India, the celebrity of cricketers in Sri Lanka is a force that few have the power to contain. There is nothing beyond the reach of a star cricketer. That is why, despite Jayasuriya’s lack of political experience, he is expected to win handily. But his real test will be after that.

Sri Lankan politics has been violent and controversial. Its leaders have given people plenty of reasons to be cynical. When a cricketer comes to parliament, however, they do feel some hope. At the very least, they believe he will work for sports in the nation. Ranatunga is said to crave the sports minister’s post. Jayasuriya, too, has specified sports as his focus.

Jayasuriya is the Roger Bannister of cricket. Bannister was the first man in recorded history to run a mile in less than four minutes. Jayasuriya, in the company of Romesh Kaluwitharna, first showed that an opening pair could do in five overs what was until then believed to be plausible in only ten or 15. At the crease, he could not wait to attack. In politics, though, he will have to be patient. “I’m a patient person in my life. Only in cricket I’m like that (aggressive).” From Ranatunga, his guide turned adversary, he will need to learn the art of leading people. Ranatunga, on his part, could take tips from Jayasuriya on keeping the waist trim.