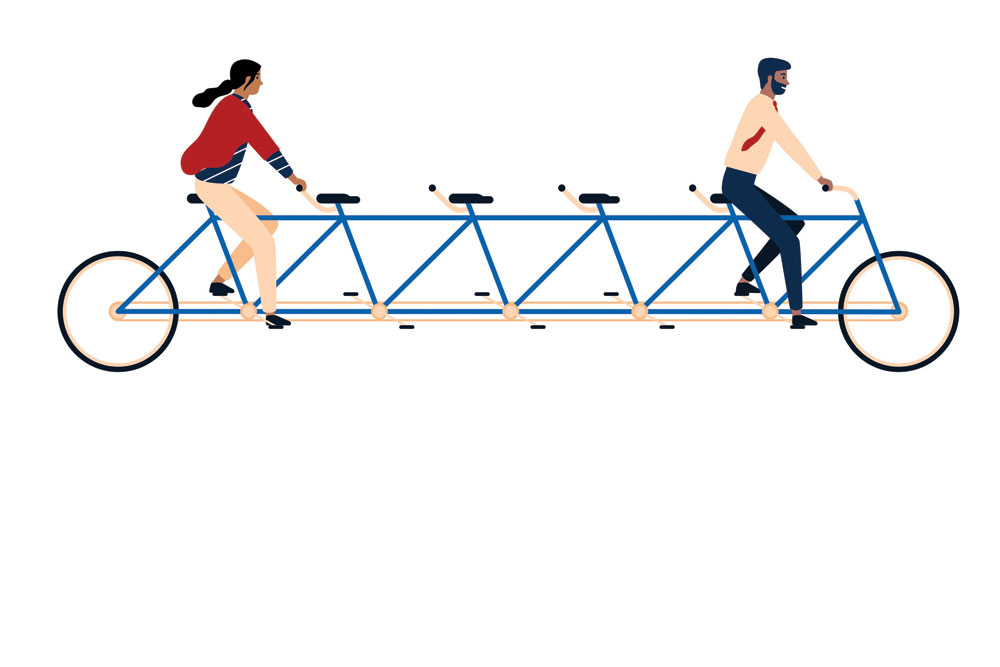 
Two days after the first lockdown was announced I went to the most popular store in my neighbourhood for groceries. There was a queue outside with white circles marked on the ground at arm’s length. A wooden railing manned by a store employee, usually faceless but now with the natural authority of a sheep herder, maintained discipline as he let customers in one by one. Inside, it was more squeezed in but with deft physical manoeuvres, one could at least not touch anyone else. Two weeks later, I went there again. The railing was raised high like a railway crossing where no trains came and the man still stood there but all he did was wave people in. Within the store it was a melee, you couldn’t turn without your nose being right under someone else’s and this was when the cases in Mumbai had been curving upwards and there was a building not too far away that had been sealed because of a Covid-19 patient within. The streets were emptier but where the public were permitted to gather, efficiency and boredom had taken over.

Once lockdown 3.0 (or reopening 1.0) began, I went there again and found the shop closed. A notice outside said there was an order to close shops at 4 PM. It was the problem-solving abilities of the Indian bureaucracy at work. If a disease spreads by close contact, then squeezing in the hours of operation of shops, or markets, will increase crowding, the exact opposite of the intended effect. But when a bureaucrat reads about a problem in a newspaper, he calls the bureaucrat one rung under him and gives a scolding, and the chain goes on until one of them decides on the simplest solution: if there is crowding in the evening, let’s take evening itself out of the equation. But I walked on and saw that at a junction where this order did not apply, some shops were open, including a wine shop. A long queue shot like an arrow in both directions from it. Towards the end of the queue, they maintained some distance but as they got nearer to the counter, milling began. Six feet, the minimum required distance between human beings to snap the chain of transmission, was a memory. No one was really making a measure of the distance in their heads. But even if they had, it is hard to see any practical way to apply it either. Bureaucratic acumen struck again. The Maharashtra government shut down liquor shops the next day.

On May 1st, the home ministry came out with new guidelines for lockdown 3.0 which said that all shops, even those selling non-essential items, would be permitted to open so long as they were not in malls or marketplaces. And then added as an afterthought: ‘Social distancing (2 gaz ki doori) will be maintained in all cases.’ Do gaz or two yards or six feet would be the magic distance that kept Covid-19 away. And, while this number was not repeated again, since the virus does not only choose stores, all other guidelines, one presumed, must logically veer around it. Like ‘adequate gaps between shifts’ in workplaces; staggering lunch breaks in offices; not having more than 50 guests at a marriage ceremony, 20 in the case of funerals; public buses operating at 50 per cent in green zones; taxis with one driver and two passengers; and so on. And then you look at the list again and wonder—just where exactly in India does any of these places allow for a distance of six feet between human beings? On May 12th, Narendra Modi announced that Lockdown 4, whose details would be provided before May 18th, would be entirely different but ‘do gaz ki doori’ had to be maintained. Clearly, all activities of India would circumvolve around it for the foreseeable future.

Airlines plan to remove middle seats when they become operational again. It raises a question on the economic feasibility of the sector—whether it can survive at all without selling the extra seat—but then even this move might be pointless. Because all that it will do is keep passengers 1.5 feet from each other. And that is not accounting for those in front and behind rows. A BBC article looking at whether social distancing is possible while flying said: ‘Responsible social distancing in the age of Covid-19 means staying at least 2m (6ft) from other people. But that’s impossible on a modern plane, where seats are around 45cm (17-18 inches) wide, so leaving the middle seat free only keeps you 45cm from your neighbour, side to side. You’d need to be more than four seats apart to keep 2m away. In other words, about as far away as the two window seats in any row of six seats separated by a single aisle. (We’re ignoring, for simplicity’s sake, any travel by passengers or crew up and down the aisle.) That’s side to side. Forwards and backwards, airline seats are spaced in rows around 75-80cm (29-32 inches or so) apart. So, if we wanted to keep people at least 2m apart, that would mean leaving two full rows free between each passenger. What that means is seating four passengers every 26 seats, which translates in percentage form to filling just 15% of seats. That’s what airlines call ‘load factor’.’

Why then leave even the middle seat empty? Because there needs to be some tokenism used to restart operations, which is just about what resumption of every activity that involves crowds will be doing. In India, the clearest illustration is of trains, the veins through which the blood of the economy flows. The Shramik Special trains for migrant labourers to return home are the first time the poor in this country are travelling long distance with the little personal space the middle class eked out for themselves in the last two decades. But even then, the distance maintained between passengers in these trains is what is usually de rigueur in two-tier AC compartments. Every row had three persons including the side seat. And if no one moved in the entire journey, that might put around a foot’s distance between them. But people have to move inside a train, whether to go to the toilet or just because it is not possible to stay in one position for 24 hours. And this is when there is order in how these migrants are being transported. When public transport is eased a little and the old chaos returns, maintaining the recommended distance is a mirage. It is no different in public or private buses unless you want to carry four or five people in them. In a taxi, one driver plus two passengers is one foot or less. No form of transport in India can adhere to the six-foot rule. Soon after when the Railways started skeletal services for the public again, possibly recognising the impracticality of the rule, they did away with social distancing altogether in the special trains.


You look at the guidelines again and wonder—just where exactly in India does a place allow for a distance of six feet between human beings?

As it turns out, six feet might not even be enough social distancing. Or it might be more than required. The novel coronavirus is still a puzzle about its extent of transmission and the six-foot rule has little conclusive evidence going for it. The World Health Organization recommends three feet. The US Centers for Disease Control and Prevention, meanwhile, says six feet. Since erring on the side of caution is always better, the Indian Government probably chose to go with the latter even though three feet would have been marginally more practical for Indian conditions. The webzine Quartz did a story on how six feet came to be and it quoted one Massachusetts Institutes of Technology study that said the only sure way to remain uninfected was to be 27 feet away. The article went on to say, ‘Without specific studies on SARS-CoV-2, all scientists and public health officials have are vague guidelines—which are at odds with the public’s desire for hard and fast answers. It’s possible that there is a specific, safe distance to remain apart to stop the spread of Covid-19. And it could be six feet when passing someone on foot outside on a blustery day, but farther when sitting at a distance from them to have a conversation. There simply isn’t enough data to be sure.’

Making commercial establishments and offices try to maintain six feet ignores India’s population and density. It can also lead to strange regulations. Recently, the district administration of
Gurugram, one of the country’s main business hubs, came out with guidelines for workplaces and one of them said: ‘All establishments shall ensure permanent paint marking outside and inside their premises. These marks shall be made 6 feet apart and it shall be ensured that persons visiting and working maintain social distancing by means of those marks. They shall also ensure that there is enough space for people to stand as per markings.’ Extend this idea across India and you have an entire country pockmarked with little spots six feet apart. And yet, is it really the inability to measure distance that will bring people closer? Even assuming the very big companies with resources draw these marks, what about the millions of small and medium establishments where numerous people work in spaces as small as cubicles. Even in the big companies, what if it is located in the top floors of a high rise and people have to reach there in a lift? No more than one or two persons can take one while being six feet apart and by the time the last person in that long queue separated by six feet reaches office, it would be time to return home. And by the time he gets off the lift, it would be time to go to office again.