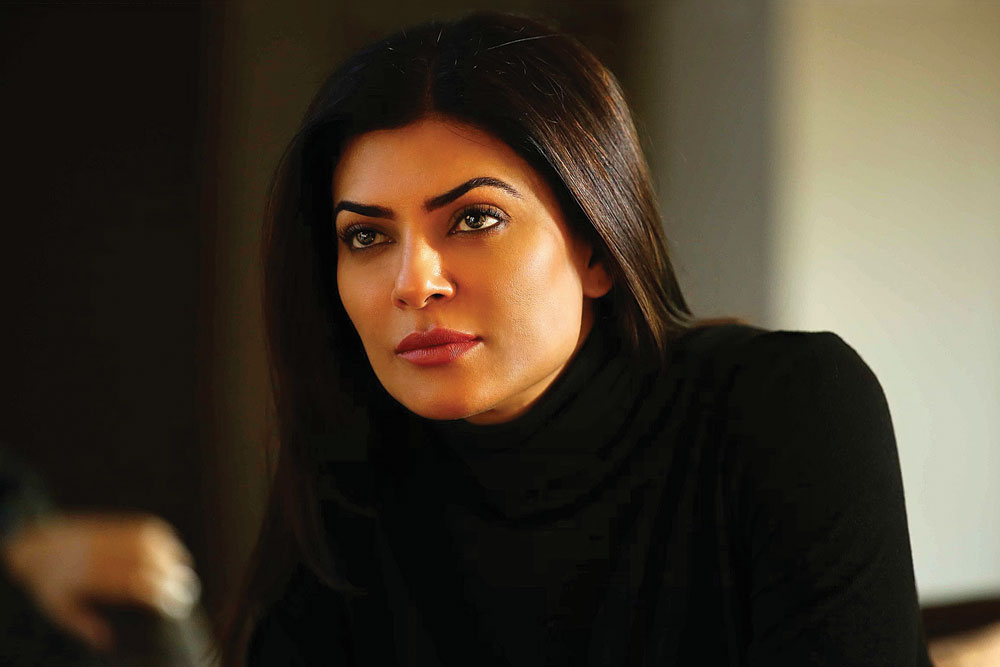 
THERE’S A SCENE in Ram Madhvani’s atmospheric Aarya where Sushmita Sen, playing the widow of a reluctant drug kingpin, says to the driver of the shipment she is trying to locate, in the language he best understands: ‘Bhosadhi ke, get up and drive the damn truck.’ This is Sen, sophisticated Miss Universe 1994, princess of posh and all things swish, making her comeback as Aarya, a gangster, on Disney+ Hotstar. “There are some actors, viewers are invested in, who become part of our psyche, and when they return to the screen, it is like meeting someone you haven’t met for a while,” says Madhvani.

It helps if they’ve lived a life and seen the world in the intervening time. Of the 10 years Sen was away from the arc lights, she spent five years battling Addison’s Disease, an autoimmune condition that attacks the body’s adrenal glands. When Madhvani went to her with the script for Aarya, he expected a long wait. Instead, the approval was almost instant. He took a moment to explain to her the way he works—mindful of time, collaborative in spirit and completely immersive. “I told her,‘I shoot scenes, not shots,’” he says. It wasn’t idle talk. He completed 60 days of the shoot with a day and money to spare.


Sen is not the only star from the ’90s making a return in Aarya.

Chandrachur Singh, educated at the Doon School and St Stephen’s College, was Madhvani’s choice to play Aarya’s conflicted (spoiler alert) husband who is killed early in the series. “We needed someone who looked like he had a real life, in whom the audience could place its trust. When I’m watching as an audience, I want to feel safe, I want to relax. Seeing someone familiar immediately comforts me. It’s like the world welcomed John Travolta in Pulp Fiction in 1996 after first discovering him in Saturday Night Fever (1977) and Grease a year later,” says Madhvani. Singh, who taught history at Doon School and music at Vasant Valley, had a dream debut with Gulzar’s Maachis (1996) and went on to romance Aishwarya Rai Bachchan in Josh in 2000, directed by Mansoor Khan. But then he struggled after a water-skiing injury and more or less stopped working. “I was a single father for so many years,” he says. With his son now in boarding school, his own alma mater, Singh has started working in the entertainment industry again.

Alankrita Shrivastava has a unique vision. I am grateful to her for the trust and patience, and for reminding me of where I always belonged, says Pooja Bhatt, actor

Alankrita Shrivastava, who cast Pooja Bhatt in her forthcoming Netflix series Bombay Begums, says for her, choices emerge from the character. Who fits the part? And if an actor fits the part, it doesn’t matter whether the actor has been working in recent years or not. If an actor has not been acting for many years, you do have to take a chance to see whether the story you are telling and the character you are offering is exciting enough for them to want to face the camera again. She adds, “I loved Pooja Bhatt from the time I was in school. I watched Dil Hai Ki Manta Nahi [1991] numerous times. And I loved her in Daddy [1989] and Zakhm [1998]. She always had this energy that sparkled through her. She was always so different from the rest, so unique.” So when her casting director, Shruti Mahajan, suggested Bhatt for Bombay Begums, she jumped at the idea. “The very first meeting I had with her I knew she was right for the series. She had that same spark and yet so much more that her life experience had given her. I’m so glad she said yes. And she has brought so much to the table. She is so open and so full of life and a real joy to work with,” says Shrivastava.

Newer films and over-the-top (OTT) platforms have opened up spaces for all kinds of stories. And bit by bit one is chipping away at the ageist and misogynist idea that ‘youth’ in a woman is key to her being a protagonist. As for Bhatt, she says being in front of the camera again has been like a homecoming. Steering away from acting to producing and directing numerous films over the last few years gave her immense satisfaction, but to return to acting in a film or series takes a different mindset and commitment, and for that, the story and role had to be complex and powerful.

“Alankrita has a unique vision and working with her was like a baptism of fire, as she pushed me to give my best and guided me to places in my heart that I had not visited for a long time. I am grateful to her for the trust and patience, and for reminding me of where I always belonged,” says Bhatt. The story revolves around five women across generations who wrestle with desire, ethics, personal crises and vulnerabilities to own their ambition, in contemporary urban India. Bhatt will also soon appear in an updated version of Sadak directed by father Mahesh Bhatt and co-starring sister Alia.

FOR MANY ACTORS, OTT series present an opportunity to stretch acting muscles they either didn’t know they had or were not allowed to stretch. Bobby Deol, last seen in a non-Deol comeback on the big screen in the spoofworthy Race 3 (2018), returns in a surprisingly serious role. He plays a senior police officer who trains a group of officers as lethal assassins to nail those in the underworld he was unable to while in active service and before being ostracised to a training academy, far away from active duty in Netflix’s forthcoming movie, Class of 83, directed by Atul Sabharwal. Deol, the younger son of megastar Dharmendra could never find his groove when younger, caught between his chocolate-boy looks and his
family’s He-man expectations.

Looks have also ended up being Lara Dutta’s biggest enemy. As Miss Universe (2000), she rarely got roles which went beyond her appearance.Ruchi Narain, who directed Dutta in Disney+ Hotstar’s female cop series, Hundred, says,“Lara and I have a personal connection that goes way back,”adding, “She, like the character of ACP Saumya Shukla, had been relegated to a certain kind of role because she was a goodlooking woman, as if that was her only quality. But I knew her and felt she had much more to offer. The character required a lot of bullish strength and a wicked sense of humour of someone who was brutally aware of how things were and yet was ready to push her way through all the bullshit to realise her ambitions, smirking at the ironies all the way.” She was 100 per cent sure Dutta was the right person and Hundred proved her right. Dutta finds herself wanted all over again, whether it was to play the naughty Begum Samru in Gurinder Chadha’s East India Company apologist TV series Beecham House or in the forthcoming Bell Bottom with Akshay Kumar, the first film from Bollywood to start shooting after Covid-19.

Narain herself could be said to have made a comeback. After working closely with Sudhir Mishra in the iconic student rebellion movie Hazaaron Khwaishein Aisi (2003), which she wrote, she directed Kal: Yesterday and Tomorrow (2005), raising the money herself by writing a business plan and going to 14 individual investors. Once Kal was made and she tried to put together her next project within the industry, but she hit one roadblock after another. When she tried to make her films with new actors, she had a hard time with producers. When she approached male ‘stars’, they weren’t comfortable working with a ‘woman director’ at the time. She worked parallelly in advertising so she could keep her craft honed and work with the best technicians, but she was always around in the film industry, trying.

THE COMING OF OTT changed everything for her. Suddenly there was a seemingly level playing field where content seemed to be valued over other non-essentials. Guilty, her movie for Netflix earlier this year, and Hundred got greenlit at the same time. For a change, she was inundated with work and offers as she had stories and by now a lot of directing and producing experience. For people like her, a woman and an outsider, it is liberating. “Much of my struggle was so unnecessary, and that also led to immense emotional trauma. One also had to work extra hard to keep one’s head straight for which family and close friends’ support is so important,”
says Narain.

When she started out, even multiplexes didn’t exist. Her first film Kal had a 23-print release over all of India. When she wrote Hazaaron Khwaishein Aisi, there was no money for writing and the script went on for six years, as she wrote daily soaps to earn money. Writers were constantly asked to copy some Hollywood movie (which later became a Korean movie) as nobody with money valued original content. Much of that has changed now, giving actors more elastic careers, as in the case of Neena Gupta, who has been busy starring in movies and series since she posted an ad on Instagram in 2017: ‘I live in Mumbai and am a good actor looking for good parts to play.’ From the ageing third-time mother in Badhaai Ho (2018) to the supersharp pradhan’s wife in Panchayat to her forthcoming reality show, Masaba Masaba, with fashion-designer daughter Masaba, she has proved that comebacks are possible at any age.
Even at 62.