The Rise of Rashmi Thackeray

The power beside the throne 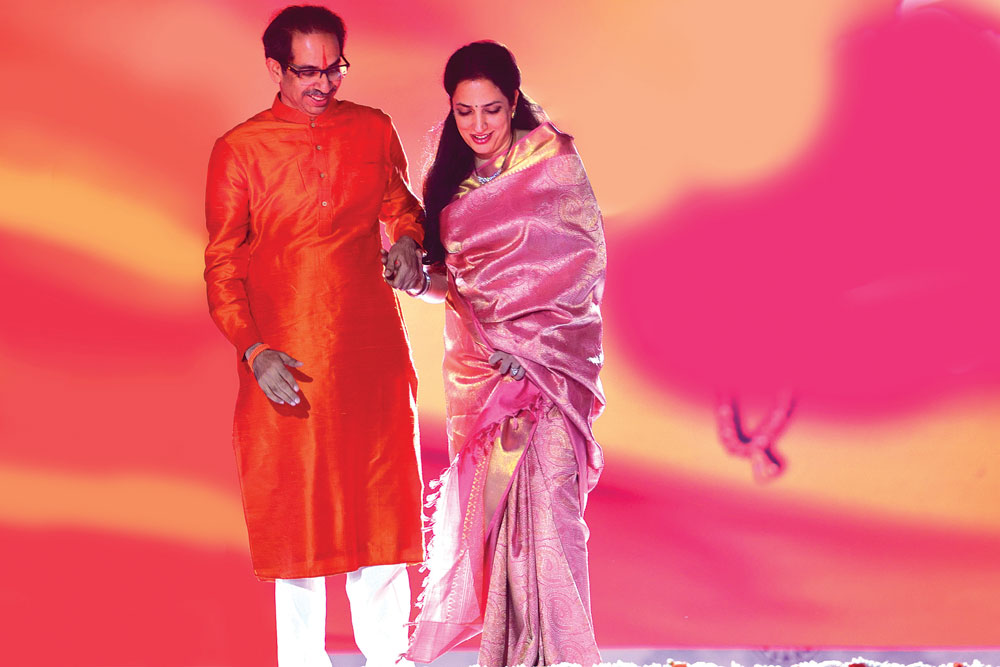 
IN MAHARASHTRA POLITICS, what you see is usually what you get. So Supriya Sule is called Tai (elder sister) because her power flows from her father, and the possibility that she will eventually inherit the Nationalist Congress Party. Rashmi Thackeray, newly appointed editor of Saamana, Shiv Sena’s highly influential newspaper, is called Vahini (sister-in-law) because she draws her sustenance from her husband Uddhav Thackeray, Chief Minister of Maharashtra.

But adding a delicious ironic twist to this is that Uddhav probably would not have been in the position he is now if it were not for his ambitious wife. So when he went to meet Maharashtra Governor BS Koshyari a day before his oath-taking ceremony, it was no surprise that he was accompanied by his wife. Certainly, their elder son Aaditya Thackeray, thrust into the public eye at the age of 19, owes his entire career to the mother—no one was surprised when he took oath as state cabinet minister as Aaditya Rashmi Uddhav Thackeray.

But Rashmi Thackeray’s journey to Queen Regent/Queen Consort hasn’t been easy. In order to ensure prominence for Uddhav, Bal Thackeray’s youngest son, she had to first combat two sisters-in-law, Smita, former wife of Bal Thackeray’s estranged son Jaidev, and Sharmila, wife of the Shiv Sena founder’s nephew and one-time favourite, Raj Thackeray. Smita, who continued to stay in the family home, Matoshree, long after she was divorced by Jaidev, was especially close to her father-in-law, running the home when Bal Thackeray’s eldest son Binda Madhav died in a car crash in April 1996, followed within months by the death of the family matriarch Meenatai.

Smita was edged out of the family home only after Bal Thackeray, who had fallen ill in 1996, became progressively weaker. But that was not before she became socially prominent, as ‘Madam Smita Thackeray’, sometime film producer of Haseena Maan Jayegi and at other times head of NGO Mukti Foundation, which runs a cultural centre in Andheri on a plot coincidentally gifted to her by the state revenue department when she was at the height of her power.

Sharmila was similarly turfed out, along with Raj, once it was clear that the party was going to remain with the son, not the nephew, not even perhaps as Bal Thackeray had dreamt, in joint command. Raj Thackeray formed the Maharashtra Navnirman Sena in 2006 and the division was complete. Bal Thackeray’s eldest son, Binda Madhav, another sometime film producer, had got into a series of scrapes when alive, and Jaidev, the second born, had never amounted to much.

To survive and thrive in the domestic politics of Matoshree is no small feat and Rashmi Thackeray did it so effectively that Uddhav, a wildlife photographer, once dismissed as too soft for Shiv Sena’s muscular politics, went from being the last hope to the inheritor. Rashmi is the epitome of all the values the Shiv Sena holds dear for women—deeply connected to her middle-class Maharashtrian roots, always accompanied by her husband or sons when she makes a public appearance, and intensely committed to her family. BJP National Spokesperson Shaina NC has known her as a friend of the family since she was in college as her father, Mumbai Mayor NC Chudasama, and Bal Thackeray were friends. She says she has always appreciated the grace and poise with which Rashmi conducts herself. She calls Rashmi an affectionate daughter, a loving mother and a committed wife, but she is also smart, astute and understands politics intrinsically. More than that, she says, she has brought up Aaditya and Tejas with good, middle-class Maharashtrian values, without allowing them to get lost in the web of politics, which can be heady to say the least.

Several scholars have written at length about the women of the Shiv Sena, the Mahila Aghadi, who perform their role as brokers, fixers and intermediaries in the lower rungs of a party machine. Tarini Bedi, who authored The Dashing Ladies of Shiv Sena, has noted how by casting themselves as no more than ‘social workers’, they are seen as unthreatening by their male colleagues and as trustworthy by their constituents even when they do in fact attempt to gain some authority. The demarcation of politics (rajkaaran) from social work (samaajkaran), she notes, is something both the men and women of the Shiv Sena try to uphold.


Uddhav probably would not have been in the position he is now if it were not for his ambitious wife. So when he went to meet Maharashtra Governor BS Koshyari a day before his oath-taking ceremony, it was no surprise that he was accompanied by his wife

One of the ways this is achieved is through active kinship. There is no distinction between the public and the private, domestic duties and party work. This is pretty much what Rashmi Thackeray did, becoming the first port of call for anyone who wanted to meet her husband, replacing the role Smita Thackeray was increasingly playing for her father-in-law. As the new matriarch and chief hostess of Matoshree, she is also a listening post, unofficial advisor and potential mediator. In making constituents feel part of the Thackeray family, she is also able to connect to the larger family, the party.

This is in keeping with the role Bal Thackeray ascribed to the Mahila Aghadi, describing the women as his ranraginis (women warriors), who by offering street justice end up as female dadas of their localities. Bedi describes these variously as breaking up a fight between two taxi drivers; naming and shaming a doctor who sexually exploited his nursing staff; or beating up a drunken husband in full public view. A purush pradhan (male-dominated party), notes Bedi, has now become almost wholly dependent on its women for their organisational skills and political campaigns even though it doesn’t allow them to become shakha pramukhs, relegating them to shakha sangathaks.

ALL-FEMALE ceremonies, such as the Haldi Kumkum and women-only excursions such as picnics, are important to keep up the enthusiasm of the female Shiv Sainik, and Rashmi Thackeray, in an ever-grander sari, is a regular fixture at such must-attend events. Veteran Shiv Sainik and deputy leader of the party Neelam Gorhe has observed her for over 30 years, ever since she married Uddhav. She has seen her build great relations with Bal Thackeray and his late wife. She has seen her look after Uddhav’s interests and raise two boys.

Gorhe has also watched as she has networked on behalf of the Thackeray family with other prominent Mumbai families in industry, cinema and literature, all the while keeping a low profile. Adds Gorhe: “She reads a lot and is well-versed in the history and sociology of Maharashtra. And most important, she embodies Balasaheb’s philosophy, that the Shiv Sena is not just a political party but a family.” She believes her elevation as editor of Saamana will mean she will continue this dialogue to make Shiv Sena stronger not just with her team but with the larger public in her own “charming and beautiful way”.

Bal Thackeray died in 2012 but his will, written in 2011, made it very clear that Uddhav would be the inheritor, though Matoshree’s first floor has been given to Jaidev and Smita’s son, Rahul. The ground floor houses the party offices, the second floor retains Bal Thackeray’s quarters as they were, while the third floor has been allotted to Uddhav, as has the farmhouse in Karjat, among other property. Though Jaidev contested the will, not much came of it. An eight-storeyed building belonging to the family has come up right across Matoshree but no one has moved there yet.

Rashmi’s takeover of Matoshree is complete, physically and metaphorically. Her say matters, whether it is who gets a party ticket or a business deal. She has also ensured that her family has done well. Rashmi’s brother, Shridhar Patankar, runs a real estate company, Samved, in which she is a director. She is a partner, along with son Aaditya, in three companies, Eloria Solar, Hibiscus Food and Como Stocks and Properties, which establish that she is a businesswoman to watch. Her sister’s son Varun Sardesai, a civil engineer, is head of the Yuva Sena media cell and controls access to Aaditya. Her mother lives two houses away from Matoshree.

She is also raising her social profile, albeit slowly, whether it is attending Sridevi’s funeral or Nita Ambani’s parties. For a woman who began life in the nondescript suburb of Dombivli, becoming the second most powerful woman in Maharashtra—the topmost slot being reserved for the NCP’s future boss, Supriya Sule—with influence far beyond her new official title, is not such a bad deal.