The Political Art of Varun Grover 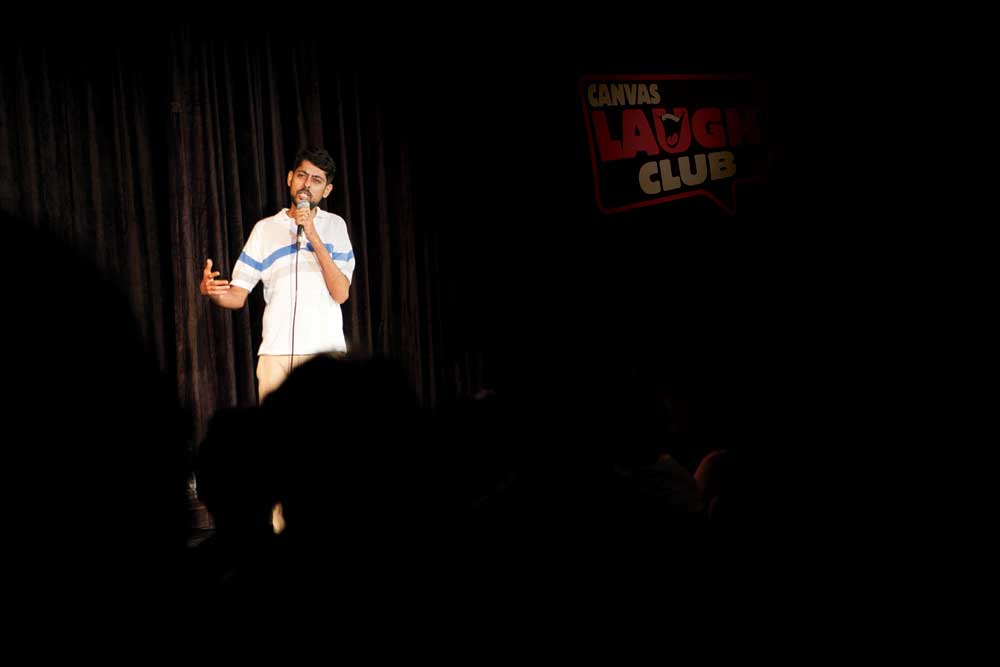 VARUN GROVER SEEMS to be in a minority amongst his peers, many of whom are in their thirties and forties; at 37, he appears to be losing weight and looks lankier than ever. He notices the same about me and asks why. I reply that it may have something to do with a recent return, after many years, to playing football and exercising regularly. He has made no such changes to his life, as of now.

Fully aware of the dangers of flippant, uninformed diagnoses, I hypothesise that perhaps the reason for his weight loss is that he is spreading himself too thin, quite literally. Grover, a poet- lyricist-comedian-author-screenwriter, is a successful polymath — his output feels equivalent to what you’d expect from three or four respectably talented and hard-working people. Last year, for instance, he was credited as lyricist in four Hindi feature films: Zubaan, Fan, Raman Raghav 2.0, and Udta Punjab. Since his slew of awards—including a National Award—for the song Moh Moh ke Dhaage from Sharat Katariya’s acclaimed Dum Laga Ke Haisha (2015), he has also been writing for ad films. “People have realised that I can also write in a space that isn’t ‘Bhojpuri’ or ‘hinterland’,” he quips, referring to his work in Anurag Kashyap’s Gangs of Wasseypur (2012), which first got him noticed as a lyricist.

Aside from that, he’s also writing a web series for “one of the biggies” (which means either Netflix or Amazon) as well as writing his second feature film after the award-winning Masaan, which he hopes to wrap up by the end of the year. Then there are the children’s fiction stories he writes for the Bhopal-based Hindi magazine Chakmak, a new one every three or four months. Oh, and when he isn’t busy fighting off trolls on Twitter (or “being one”, as he admits sheepishly), he is writing and performing more stand-up comedy than he has in years. As opposed to last year, where he did “just” eight to ten solo shows, in the first two months of 2017 he has already performed at four open-mics and had two solo shows. And none of this, of course, counts Aisi Taisi Democracy, a live political satire show that he has been performing with Delhi- based comedian Sanjay Rajoura and musician Rahul Ram, vocalist-bassist for folk-rock giants Indian Ocean, since 2014. Last year, they did 13 shows.

How does he manage to cram so much into his workdays? “My day is structured by deadlines,” he says, when we meet at a café in Versova, Mumbai, for a chat. He is dressed simply, in a loose t- shirt, jeans, and chappals, and a little flush from having travelled a distance by three modes of transport: local train, metro, and auto-rickshaw. “I don’t think there’s any other way to do it.” Songs are usually written within tight deadlines, about a day or two before recording. For stories, he gets longer deadlines, which he uses as a buffer between successive projects. Everything else gets done whenever he finds the time, further accelerated by the panic of a looming deadline.

He carries his laptop everywhere; save for times he’s travelling out of India. Once in about five weekends, he allows himself a couple of days “off” from work. But even then, he’ll find time to scribble down some poetry or material for his stand-up act. “I can’t survive without writing,” he says. “At the end of a day, if I haven’t written anything at all, I feel hollow.”

When Grover and I meet, the new tour of Aisi Taisi Democracy—he refers to it as “season 2.5 or 3”—is less than a fortnight away. “There’s so much to make fun of, but sometimes you don’t know what the point of it all is,” he says faux- wearily, referring to how news cycles have been scrunched to a couple of hours, thanks to diminishing attention spans. “It feels like some form of Chaos Theory right now, but maybe if you look at everything from a cosmic level, some sort of pattern could be observed.”

People need to understand that when we say something, they’re just words. A tweet is just text—it can’t take away the greatness of your country

The first leg of this tour, which took place in early March, has comprised back-to-back shows in Delhi, Bengaluru, Hyderabad and Mumbai. We’re at the final show, in Mumbai’s Rangsharda Auditorium, where a packed-to-capacity crowd is rolling with laughter. There are jokes at the expense of demonetisation (of course), nationalism, fake news on WhatsApp, the forced ubiquity of the Aadhaar card, the draconian Armed Forces Special Protection Act (AFSPA), and, of course, Narendra Modi. Much of the audience comprises educated, seemingly-Left-leaning liberals, who are nodding away and applauding in delight when the jokes land on their side of the fence, and are decidedly more muted in their reactions when Rajoura talks about the problems he has with liberal elitism and the failure of educated Muslims to question some aspects of the Qur’an. The mood picks up again, however, when Grover takes the mic again and speaks about his childhood. Anecdotes from this portion include a story about walking in on an uncle in the midst of a masturbatory session and how he, as a teen, mistakenly—thanks to his school’s refusal to provide sex education—believed that pregnancy occurred when men and women hugged each other. At this point, everyone is laughing—even the usher standing near the entrance, who I caught frowning in disapproval when Grover spoke about why he doesn’t agree with the imposition of the National Anthem in movie theatres. (In case you were wondering how his parents react to some of his more risqué material, his father enjoys it, but his mother wonders what is “the need to say all this on stage”.)

“Aisi Taisi Democracy is not a movement; it’s a space of political satire we feel very strongly about,” he says, when I ask him if there’s a danger of it becoming a self-serving echo chamber for people who share the same political views. “Firstly, I don’t think art should be put under the burden of changing the world. Secondly, I don’t think we’re changing anybody who is on the other side. I think 80 per cent of our audience broadly has the same views. So, the matter is about the rest of the 20-30 per cent. The main takeaway therefore should be that it’s okay to laugh at touchy things. So, in a show, almost everybody will have issues with some things we say. And that’s okay.”

The biggest compliment, according to him, is when they get positive responses from Aam Aadmi Party members to jokes on Arvind Kejriwal, or even when Modi supporters appreciate jokes at the Prime Minister’s expense. “We never want everybody to agree with everything we say,” he says. “People need to understand that when we say something, they’re just words. A tweet is just text — it can’t take away the greatness of your country or the pride you feel for your national flag, for example.”

There’s a note of frustration in his voice as he says this, an indication of the obvious: he has voiced this thought many times before, but it has fallen on deaf ears. With more than 71,000 followers on Twitter, Grover’s often outspoken, occasionally sardonic tweets on current affairs receive bouquets and brickbats in equal measure. When the trolls come, they come in droves. In October 2015, he temporarily quit Twitter in disgust, unable to deal with the volume of abuse he was receiving.

Grover admits that this bravado is successful in masking a deep sense of paranoia, which is “almost a medical condition” for him. “I’m always thinking of accidents, plane crashes, etcetera… basically, in any scenario, what could the worst outcome be? At home, I have all these self-defence mechanisms like keeping red chilli powder handy in case someone breaks in. I live on the 23rd floor, so I’m constantly worried about what will happen if a big earthquake hits Mumbai.”

But Grover doesn’t believe in living in fear. “I’m not scared as much of the police and the law [such as sedition] as I am of rogue elements,” he admits. “Because if you get beaten up, that’s that. I don’t know, I think the day something truly bad happens, I’ll stop [tweeting unpopular opinions]. Because it’s not like the police will take your side.”

He pauses, and then adds, “But then what does one do? Shut up and not say anything out of fear? I can’t do that. It’s a very internal need for me to express myself.”