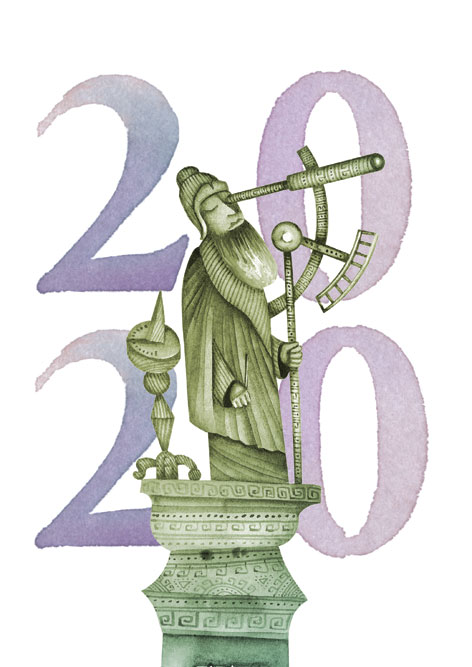 
After a year of high drama, a post-tempest calm of sorts wouldn’t be amiss. But the passage of time and the march of history don’t break for the season. 2020 has begun on the same note 2019 ended. Northern India was in the grip of a severe cold wave while Moscow poured artificial snow on its streets to celebrate an un-Orthodox Christmas and New Year’s Eve. Bushfires ravaged Australia and killed half-a-billion animals; the Philippine economy was hit by another Pacific typhoon. America is set to begin the Senate impeachment trial of its President. Britain is about to hurry on out of the continent. And, an assassination in Baghdad has led to speculations about World War III.

Forecasting, some would say, is a fool’s errand. There is no crystal ball to gaze into. The only available tools are observation and logic. Logic is cold. Observation often misses the wood for the trees. Yet, the relatively safe prediction tends to be the one strictly adhering to its context. Venture further afield, and we are at sea. 2019 was a year of several radical departures. India witnessed, and involved itself in, action on issues that had remained untouchable for most of its independent decades. It is, therefore, a redundancy, logical and rhetorical, to say that 2020 is a critical year for the country. (Which year isn’t?) But given those very actions in question, consequent challenges have emerged. In 2020, India will have to deal with those at both home and abroad. There is yet another set of challenges not directly a result of legislative changes and the exercise of executive prerogative, but the outcome of the medium to long-term workings of the machineries of state, society and economy, as well as the circumstances in which they operate.

Having just walked out of the past, we can be more certain about it than about the future we are headed for. But we can’t take another step without looking both ahead and at the ground—and never at the same time. To make forecasts for the year that has just begun, we need to take as our point of departure one or more of the departures the nation (and often the world) made in the last year. And premise each prediction on a build-up of momentum over the last few years to the point where we find ourselves now. If the fallout of the amended citizenship law is bound to the passage of the self-same law, then both the law and its immediate aftermath throw back to a longer (and larger) history without which neither can be explained, nor any signposts planted along the road hereafter. On the other hand, there is no single inflection point or rupture to which the state of the economy could be pinned, nor any quickfix determined and prescribed.

The rise of nationalism is as much an Indian phenomenon as a global one. From Donald Trump in the US to the UK’s Boris Johnson and Narendra Modi in India, there’s a building nationalist wave that these leaders have been riding. It may be too soon to say how long this re-emergence of nationalism will last but what can’t be denied is that a fundamental shift has happened in the global polity, one that is already transforming geopolitics too. The Modi Government has taken certain bold decisions, perhaps because it had the mandate to do so and also the political will. The reorganisation of Jammu and Kashmir and the abrogation of Article 370 did not come out of the blue. Nor did the Citizenship (Amendment) Act, 2019. Yet, a narrative has emerged that proclaims Indian democracy is under threat, citizens are on the verge of disenfranchisement. This has been partly or wholly bought by lawmakers and media abroad. Even as India debates and deals with the fallout, how will the Government handle the pressures from influential sections of our most important strategic partner? Meanwhile, economic growth has slowed to about 4 per cent, with manufacturing being hit the worst. In 2020, with a liquidity crunch in the economy, not only must the Government choose where and how to intervene to restore normalcy but perhaps also muster the political courage for deeper structural reforms.

Security (along with Pakistan, China and the price of oil) will remain a significant preoccupation for India, not least because of the reconfigurations in its neighbourhood. Connected to security, and in and of itself, the question of surveillance and restrictions, temporary or long-term, on the internet and social media in certain pockets may be deemed necessary but will certainly be debated. None of the above, however, is expected to alter the twin national obsessions of cricket and Bollywood. With the T20 World Cup and plenty of tours, Virat Kohli & Co will be busy and hopefully win an ICC tournament. Bollywood, meanwhile, has to meet the demands of a new generation hooked to remakes and streaming services, even as it wants more progressive storylines about women.

The apocryphal Chinese curse would have us live in ‘interesting’ times. We find ourselves in a time of upheaval. We just don’t agree on the kind of upheaval it is and what it will bequeath us. Beyond the trade wars and Brexit, it is safe to say that we are now inhabitants of the post-globalisation world calling for new means of dealing with each other, where nothing and nobody will be reduced in a gargantuan cauldron to an unnameable sameness, where nations may yet discover a new mutual respect for each other. This new decade may see the beginning of an overhaul of the institutions and assumptions that have defined the post-World War II world order. For, 2020 is the real beginning of the 21st century.