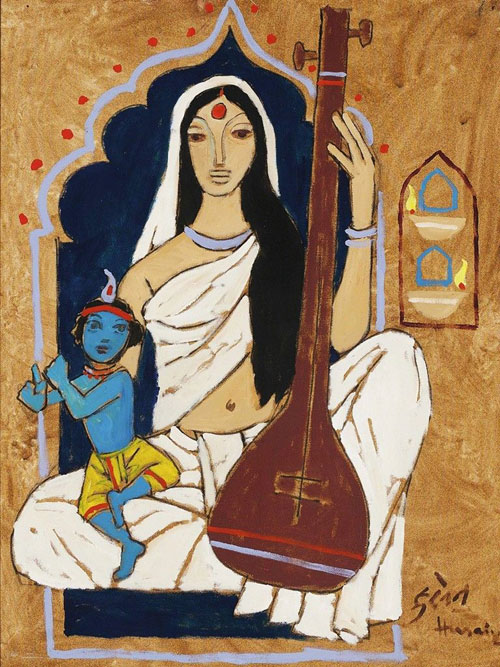 Meerabai With Krishna by MF Husain

For centuries, Meerabai has been seen as a saint in India, wandering the streets singing songs in praise of Lord Krishna, becoming a leading light of the Bhakti movement. But in popular culture, such as the 1985 songs from Raj Kapoor’s Ram Teri Ganga Maili, she has been seen as a tragic figure who forsook all for her faith. A 1979 movie by Gulzar, titled Meera starring Hema Malini, showed her as more than that, a possessor of fierce philosophical arguments about a woman’s place in society, her domestic duty contrasted sharply with her mission in life. But the movie flopped, with people perhaps not willing to see Meerabai as a revolutionary who took on the established patriarchy. The overwhelming sentiment about her remains the one first articulated in 1945 in MS Subbulakshmi’s Meera, which was remade with the same singer two years later, in Hindi by American director Ellis R Dungan.

Today, there is a concerted effort to rescue Meerabai from this wimpish avatar and restore her to her rightful place—as one of the earliest feminists in India.

Manu S Pillai’s essay on her, in his new book The Courtesan, the Mahatma and The Italian Brahmin, highlights this. He told Open: “When her husband dies and she is expected to become a Sati, she flatly refuses. When they tell her to live a life of self-denial as a widow, again she refuses. When she is tormented, she walks out of her husband’s family home. This was not only an act of defiance but also one of rejection—rejection of prevailing social mores and expectations of a woman of her class and background. Krishna was Meerabai’s great love but in her verses of devotion are couched radical messages that go well beyond the usual.” Krishna, in that sense, is not only spiritual salvation for Meerabai but also very immediate material release from a world with which she did not agree, both as a woman and as an individual, adds Pillai.

Meera is now being reinterpreted in song, drama, poetry, even in theory as a free spirit. Growing up, singer Sona Mohapatra always found something fishy about Meera’s bhajans: “The more I studied her songs, the more I realised she was India’s first rock star. She was free spirited, egalitarian, broke caste barriers, travelling from place to place, visiting temples. A lot of her poetry celebrated sensuality, eroticism, subversion.” She has been singing versions of Meera’s songs, celebrating an artist who wanted to “go beyond the obvious,” channeling her passion into contemporary feminism.

Mohapatra is not the first singer who has explored Meera in such depth—both Subbulakshmi and Lata Mangeshkar have done so as well. But she is certainly among the first to understand her rebel spirit that led her to resist attempts to poison her, made her appear in the company of Kabir in Kashi, question Chaitanya’s disciple Rupa Goswami in Vrindavan for refusing to meet a woman, and consider herself a reborn gopi. Scholars have pointed out how despite not having any sect, temple, monastic order or educational establishment in her name, Meera has managed to live on, through co-authorship and compositions by men and women of subaltern classes, as well as a coming together of Hindu and Muslim, Sufi and Bhakti traditions. There are over 1,300 songs in her name—not all composed by her—that celebrate Lord Krishna. As Rashmi Bhatnagar, Renu Dube and Reena Dube write in Female Infanticide in India: A Feminist Cultural History;  ‘Meera’s great innovation is to deploy Brajbhasha, western Rajasthani dialect, even Gujarati and Marathi, to articulate the disaffected Rajput woman’s perspective as is her self description, not as a daughter of the Merta clan, wife of a Sisodiya royal or even as Rajput but as wife of Lord Krishna.’ ‘Meera enables us to hear, for the first time, in North Indian dialect, a distinctively female enunciation of anti-patriarchal, anti-Rajput opposition,’ capturing the woman’s alienation from her own world, they add.

For contemporary scholars and performers like Lakshmi Chandrashekar Subramanian, Meera is a dear friend whose devotion, courage and faith she can look up to. She and her husband Aks are full-time musicians who create and perform Electronic Bhakti Music. He’s a composer trained by AR Rahman, and they are both vocalists who have devoted their lives to singing the poetry of the great saints of India. “She is an ideal we hope to live through our music as well as lifestyle of bhakti. India has produced innumerable bhakti rockstars over the centuries, both women and men, and Meera is one of our treasures who has pan-Indian appeal.” Lakshmi has done an MA at Stanford exploring how our imagining Meerabai constantly gets recreated with every interpretation of her bhajan. “As a singer, when I sing a bhajan with Meera’s signature, the poet-saint’s life story (as it’s been recorded and remembered over 500 years) flashes in front of me. In our concerts, Aks and I narrate key incidents in her life, evoking bhakti in our hearts as well as those of the audience—and then we render her song; lyrics authentically sung along with contemporary musical orchestration. Thus we have recreated our own Meerabai in 21st century America.”

There are also occasional plays such as Meera the Musical, by the Art of Living Foundation, which becomes a ‘fabulous retelling of the story of a woman who had the courage to live on her own terms’. And that is what academic Akshaya Kumar points out, noting Meera’s forever changing nature, from icon of non violent nationalist imagination, embraced by Mahatma Gandhi, to arch symbol of the marginalised and the subaltern. Even now, among young female poets, she typifies a certain kind of blind love. As poet Priya Malik says in When a Man Cheats on a Woman: ‘When a woman is in love, she will be your best friend out of love/And also your worst enemy, when she is out of love/ Ek rumani shaam ki laali, khatre ki laali bhi to ban sakti hai/Aaj agar Meera hai to Kali bhi to ban sakti hai.’

Suffering or seething, rebellious or radical, Meera’s passion has remained a constant. Pritish Nandy, a poet, among other things, wrote about her in Songs of Meerabai, with drawings by Rabin Mondal in 1975. He says, “She was obsessively in love with a man who was not hers to own. If indeed he existed, he existed in the hearts and minds of an entire civilisation. Yet she claimed him, reached out to him, sang of her love for him. Only a rockstar poet does that. She reached out for an impossible love; she did not moan and groan about his inaccessibility; she celebrated it. Like a true poet, she never gave up on that love even though, I am sure, at times his absence must have weighed heavy on her. But she accepted it and believed that all love is a reaching out, a desperate need that does not require fulfillment, a yearning that celebrates his absence, a love that goes well beyond the reach of the possible.”

Meera, the constant pioneer, the eternal seeker, is also the forever lover of Lord Krishna.