The Light at the End of the Lockdown 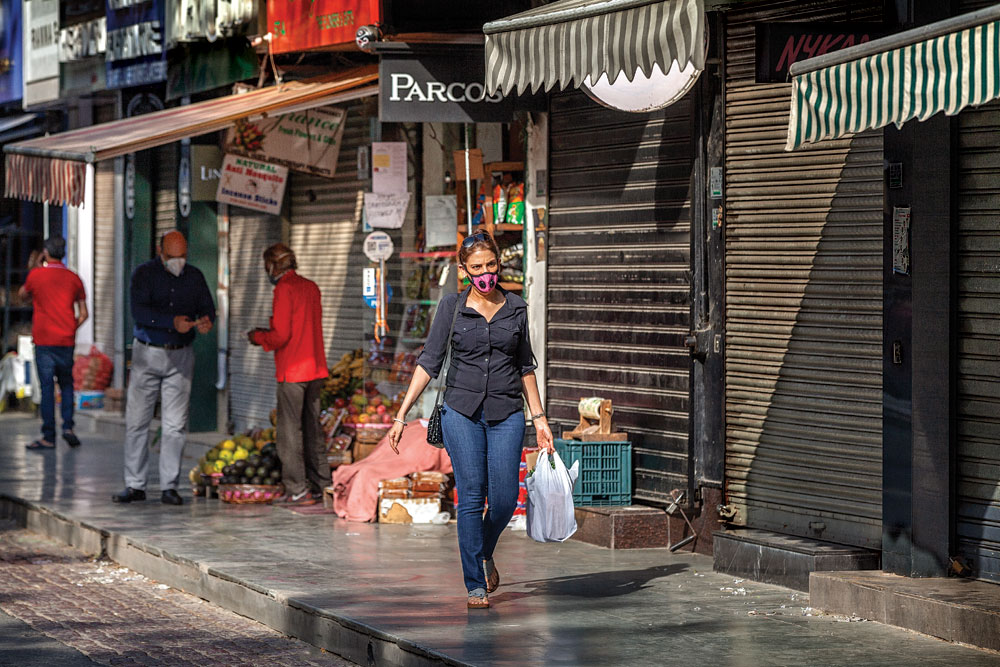 A scene from Khan Market, May 4 (Photos: Ashish Sharma)


In Delhi, the calendar flips to May with the flowering of the amaltas and the gulmohar, one carpeting the ground in the colour of hope and the other blazing orange-red against the clear blue of the summer sky. This year, there aren’t many out to admire the sight, and to breathe the cleanest air in a while. On a regular morning, the road that rings India Gate and the newly-erected war memorial would be a giant traffic snarl, with cars making their way to government buildings and private sector employees headed towards Connaught Place. On May 5th, however, the area is deserted, devoid of life. The beating heart of the capital’s power centre, ringed by ashoka, neem and jamun trees planted by the British in an attempt to recreate the countryside they had left behind, resembles just that—a countryside. Asha, a New Delhi Municipal Corporation worker who has been keeping one part of the India Gate circle clean for the past decade, arriving every morning at 5, doesn’t like the emptiness. “Every day used to be a mela here, now it feels like a funeral ground.”

To watch a city that is said to be expanding by 100 people an hour, making it the world’s fastest-growing urban sprawl, grind to an abrupt halt, is not easy. Noise, integral to the modern sensory realm, has all but disappeared. And even those who had bemoaned the incessant incursions of the city’s sounds into their domestic and work lives have been forced to rethink notions of space and privacy. Like Asha, many have found the chaos that is India to be intrinsically linked to their identities. Now the city is slowly coming back to life, like a rusty engine warming up.

Two days after the Union Home Ministry extended the countrywide stay-at-home orders by two more weeks—until May 17th—Delhi Chief Minister Arvind Kejriwal held a press conference welcoming the relaxations proposed by the Centre even as the city’s Covid-19 count continued to rise. “People should be ready to live with Covid-19,” he said, in a brave but unpopular announcement. The common man, increasingly wary of another wave of the epidemic, seemed to disapprove, but with the state government’s revenue falling to an all-time low—from Rs 3,500 crore for the month of April last year to Rs 300 crore this year—steps had to be taken. Government offices—and private ones if they so wished—were re-opened with 33 per cent staff in attendance. Neighbourhood shops could welcome shoppers again, even as schools, malls and markets continued to be shuttered. And yet, the fact that Delhi remained shut for the most part a day into the more relaxed paradigm reveals the vice-like grip of fear over the capital. And with good reason. The total number of positive cases in Delhi, a Red Zone, stood at 5,104 on May 6th, of which 206 cases were reported the previous day. A total of 1,468 patients had recovered, while 17 were on ventilator. The doubling rate of Covid-19 stood at 11 days now. “We opened today because we were getting calls from our regulars, but to be honest, I am not very comfortable,” says Amit Mishra, the owner of Krishna Electricals in Mayur Vihar’s Gomti Complex. He has strung a rope across the entrance and there are boxes painted on the ground for social distancing but few who come to the store follow the etiquette, he says. All the other shops in the row are eateries, which remain open only for takeaway—an important source of income for delivery boys who have been out on the streets during the lockdown.


Babar Road is a typical pre-Independence Delhi neighbourhood with sprawling homes shaded by leafy trees. A quiet neighbourhood by any standards, the veil of silence that has always enveloped the street belies the chaos of one of Delhi’s most popular spots, Bengali Market, just a few metres away. It was the sealing of this area, on April 8th, that really brought home the threat of Covid-19 to most Delhiites. Three from the neighbourhood were found to be infected and 35 workers had reportedly gathered on the rooftop of a popular pastry shop. The area was de-sealed on May 5th, but things are far from normal. Amit Goel, whose family has run a chemist store here since 1976, says most residents are yet to step out. Goel kept the store open every alternate day during the lockdown, but sales are down to a third of what they used to be. Home deliveries have kept him going so far—and will likely continue to do so in the days to come.

Five kilometres from Bengali Market is another containment zone, this one yet to be de-sealed. It is a season of festivities and Nizamuddin basti should have been gorging on falooda, jalebi, rabdi and piles of deep-fried sevaiya. Nizamuddin dargah, a symbol of the syncretic culture of the city, and the tomb of Humayun across the road, should have been drowning in a sea of tourists and locals this time of the year. But as luck would have it, the neighbourhood is not only celebrating—for want of a better word—a lean Ramzan, the very fabric of community life here has visibly frayed. With the basti emerging as the source of the biggest cluster of Covid-19 cases in India, residents remain prisoners inside their homes. Many continue to struggle to put on the plate, says Rashid Saddique, a heritage tour guide. “They have been issued ration but they need to go to a chakki to get the wheat ground, and even this is not possible. Those who can afford to buy food, can’t go out. Deliveries, too, are banned.” At the ration shop, a mere mention of their neighbourhood is cause for alarm. “We are asked to stand aside, take whatever is given. It is humiliating.” The Nizamuddin cluster resulted from an ill-fated meeting of the Tablighi Jamaat, a movement that calls for a return to the practice of Islam as it was under the Prophet. “People don’t seem to know that the mosque where the congregation took place is not the Nizamuddin dargah, but another place of worship. Mahaul bahut bigad gaya hai [The situation has worsened.],” says the 32-year-old who earns a living leading Indian and foreign tourists through the reticulated maze of the basti introducing them to the Sufism of Hazrat Nizamuddin Auliya and pointing out the grave of Mirza Ghalib.

Believed to be one of the world’s oldest continuously inhabited cities, Delhi was razed and rebuilt seven times by invaders ranging from Timur Lang to Ahmed Shah Abdali. “It is a city which has been brought to its knees time and again and has pulled itself together each time,” says historian Sohail Hashmi. But Delhi, according to Hashmi, changed completely in 1947. Those who came in brought with them a different way of speaking, a different way of being, and thus, a completely different city was born. “Even today, nobody lives in New Delhi. It only harbours a transient population of bureaucrats, MPs, ministers. No one community in particular can lay claim to this city. It has always welcomed outsiders and I don’t see Covid-19 changing that,” says Hashmi. It has, however, turned its back on migrant workers like Nimkheda Upadhya, a 24-year-old from Damoh district in Madhya Pradesh, who started walking home on May 4th. For the group of 10, including Upadhya, who talk to us while resting up under a tree on the Noida link road, home is another 700 km away. “Maybe, we will die walking. I will take my chance with Covid-19 than live with hunger for even one more day,” he says, adjusting his heavy knapsack.

Those cooped up in the tiniest of homes in Delhi are just as desperate. The bylanes of Chandni Chowk are home to thousands of families crammed into one-room dwellings that make physical distancing impossible. Says Zameer Ahmed, a wholesale dealer in Azad Market who lives in Ballimaran, “For many of us, the only respite used to be a visit to the mosque. There are no other open spaces here. Now even that is not possible.”

With the rules now being relaxed to allow house help and other staff back into apartment complexes, class differences and social inequities are in full, unashamed display. Most gated communities continue to shut out the rest of society, and the tyranny of Resident Welfare Associations upon those who serve them has not abated since May 4th

With each passing day since the partial lifting of restrictions, the number of the people on the roads is increasing. The police force, already stretched thin, is bracing for even more hours on the road. The new slogan, Delhi ki police, Dil ki police, notwithstanding, there is not a lot to take heart in. “It is not going to be easy separating the joyriders from those who are out for work, especially with the private sector now open,” says a police constable on a South Delhi picket. On the very first day of Lockdown 3.0, Khan Market, the upmarket urban epicentre of city, saw a burst of activity, albeit mostly in the back lane. A steady stream of shoppers gives the street a look of relative normalcy. And yet, when we speak to a woman who has come all the way from East Patel Nagar to pick up basil leaves and cereal because “the quality is better in Khan Market”—a quintessential Delhi excuse if ever there was one—it seems clear that we inhabit a dystopia where the presence of others is at once thrilling and disconcerting.

With the rules now being relaxed to allow house help and other staff back into apartment complexes, class differences and social inequities are in full, unashamed display. Most gated communities continue to shut out the rest of society, and the tyranny of Resident Welfare Associations upon the great unwashed who serve them has not abated since May 4th. “Earlier, our gates were locked to keep the outside world safe from us. Now we wonder if we have to safeguard ourselves from the outside world,” says DK Bhandari, president of the J&K blocks of the Dilshad Garden RWA, talking to us at the gates of what was Delhi’s first containment zone. When his phone rang on the morning of March 25th, and the name of Pankaj Bhatnagar, a sub-divisional magistrate in Northeast Delhi, flashed on the screen, Bhandari prepared himself for the worst. Little did he expect to be told, however, that there was a Covid-19-positive family within the neighbourhood. “We had just started coming to terms with the fact that Covid-19 had reached India when we found that it had actually come to our doorsteps,” says Bhandari. The same day, the gates of the enclave were shut to the world, and a posse of five guards, posted outside. Delhi had declared a fight against Covid-19. The gates remained shut for almost 40 days but de-containment on May 1st has not been a cause for celebration for the almost-1,600 households in the colony. “The pandemic has not even peaked,” says Bhandari, walking back into his sanctuary.

“Cities are not resilient. People are. Which is why they always come back; from wars, from pandemics,” says Hashmi. “Covid-19 may bruise the city but eventually, this too shall pass.” 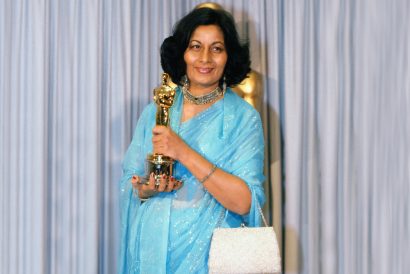 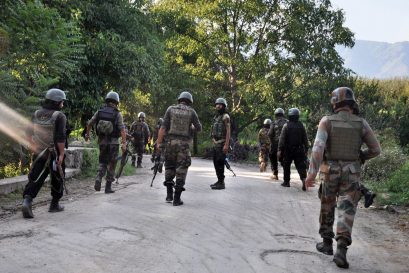 The Endgame in Bastar

Maoists are running out of places to hide