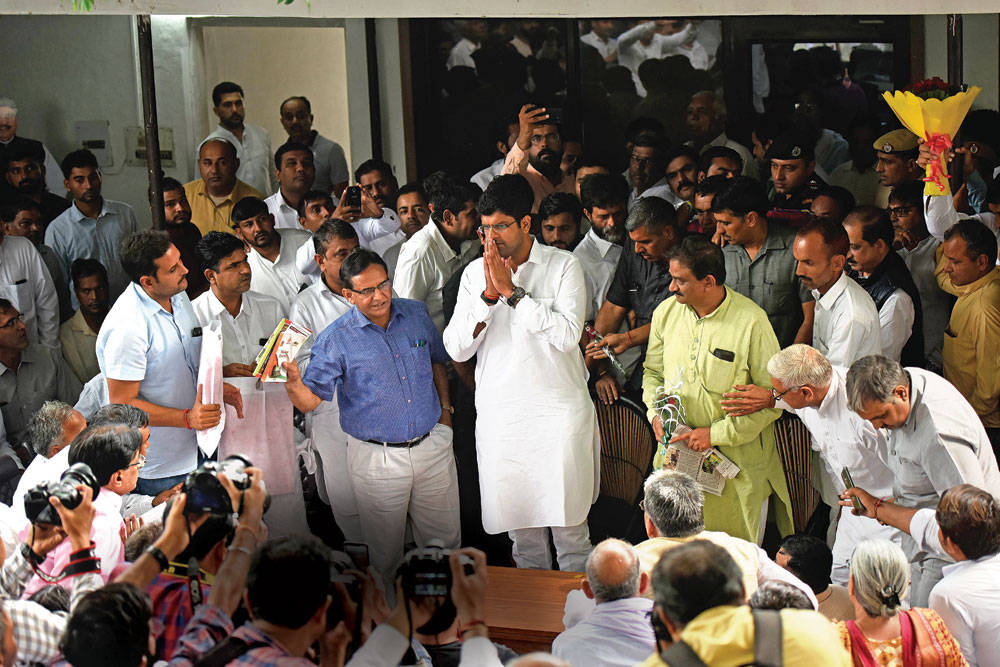 
THERE IS A POPULAR saying, ‘Haryana mein koi bhi mukhyamantri ho, thaath toh Jat ke hi honge’ (No matter who’s Haryana’s chief minister, only Jats will flourish). It reveals the critical importance of the Jat vote in Haryana’s Assembly election. In the recent polls, too, the Jat vote has proved conclusive. It is chiefly responsible for the Bharatiya Janata Party’s (BJP) alliance with the Jannayak Janta Party (JJP). The Jat vote has also ensured the rise of Dushyant Chautala as a potential young leader representing the community. The Congress has recovered some respectable ground. That too, thanks to the Jat vote.

The Jat representation is, as always, paramount in Haryana’s electoral politics. The Jat vote is never the loser. Assembly elections in Haryana testify that the caste vote bank is decisively shaped by the robust script of Jat politics. The Jat vote bank can make the predictable unpredictable and catch one off guard. As with previous state elections, this time round too Jats have proved themselves a fiercely determining and independent force. The BJP and JJP’s post-election arrangement came about in the light of the dynamic volition of the Jat vote. The JJP as a new political platform for the heterogeneous Jat community and Dushyant Chautala as the clan-community leader being made the Deputy Chief Minister is a moment of triumph in the Jat heartland, spread across Rohtak, Jhajjar, Sonipat, Jind, Hissar and Kaithal belts. The BJP’s alliance with the JJP is perceived as Khattar’s attempt to pacify and accommodate the interests of the community. Jats have been angry about the reservation demand and their violent agitation in 2016 emboldened their constituency as an isolated and beleaguered community in Haryana’s power structures. An angry Jat is not good news for Haryana politics. The BJP has realised this. The disquiet has been quelled. With their Jat leader at the helm of the present coalition, a stable government is predicted.

However, the uniqueness of Haryana politics is hard to predict. The Jat voter has often been quick enough to realise that no political party or leadership is above board. Not even from their own community. That’s why Jat farmers have traditionally prevented leaders (crucially, their own Jat leaders) across political parties from pulling the wool over their eyes. The weightiness of their vote bank has emboldened and consolidated the non-Jat vote in the state. And it is this equation and contention—of the Jat versus non-Jat vote—that has historically shaped the course of Haryana politics. This has proved conclusive in the recent election results as well.

It seems that voters and political candidates in Haryana have a tacit understanding. They both believe in the impermanence of political loyalties and authority. Switching party affiliations and defections are the rules of the game. Jat voters know it and their leaders play this game to the hilt. The phrase ‘aaya Ram gaya Ram’ is the tip of the iceberg. Caste and clan allegiances supersede party affiliations. Khap loyalties, kinship networks remain enduring institutions, symbols and aspects of political mobilisation. The chowdhar (power) of the landowning community is central to their past and present political narrative. The chowdhar has to be sustained at all costs and crucially via the democratic power and bureaucratic structures of state polity. To sustain the chowdhar, the Jat vote can alter political equations, upset the apple cart and dismantle potential and predictable electoral arrangements.


Dushyant Chautala’s emergence is characteristic of how Jat leadership in rural Haryana has been segmented. The Jats have given this young man a political space in their rapidly transforming economic and social landscape

The rise of Dushyant Chautala is an outcome of local kinship ties and biradari-based politics and competition combining vertical and horizontal mobilisation. He is the great-grandson of Chaudhary Devi Lal, the giant Jat leader from Haryana, two-time Haryana Chief Minister and former Deputy Prime Minister. As somebody who is seen as the chhavi (image) of Devi Lal, Dushyant has inherited a legacy of political leadership that has diffused power through the extended lineage of four generations. His political family has been all too adept at maintaining political equations and balancing local and factional tensions. However, Dushyant is not the singular Jat leader whom Jats chose unanimously. He is indeed a jannayak. But he cannot be a sole nayak. Jats wouldn’t permit him to be so.

So what does Dushyant Chautala’s rise signify? His emergence is characteristic of how Jat leadership in rural Haryana has been segmented. Significantly, Jats have given this young man a political space in their rapidly transforming economic and social landscape. And yet, his emergence testifies to a historical pattern of alternative enclaves of power and representation signalled by factional politics and combatant clan leadership. Dushyant’s JJP is a breakaway faction from his grandfather Om Prakash Chautala’s Indian National Lok Dal. Family feuds, rival leaders, contending factions and kinship and caste networks shape the Jat political narrative. Jats do not vote as a unified community. Their vote is split. Their leadership is hierarchical but contested, disputed and fragmented. And that’s what makes the Jat vote momentous in determining the mandate and political outcome in uncertain ways.

Politics is a game of the possible, of impermanence—and of pragmatism. The paradox is that in Haryana’s political narrative, Jats, constituting about 28 per cent of the population, have always been a major factor. The resilience of the Jat vote is exceptional. This is for three reasons. First, Jats have historically emerged as a dominant caste. Second, they are the most politically organised community in Haryana. Third, Jats have chartered their political trajectory by constructing the ‘Other’ and have crafted their caste and clan identity in opposition to non-Jats. They have sustained their exclusive political language through shifting alignments and affiliations across parties. As long as their economic and political interests are addressed, they couldn’t care less about which party they aligned with. Traditionally, Jats identified the Congress and BJP as pro-urban and anti-Jat, but their stance has been diluted in favour of their community interests being protected by parties across the ideological spectrum. The impressive galaxy of their political leadership has represented their voice and anxiety at different times and ensured that they got a substantial share of the political pie—more than their numerical strength. In the past, Bansi Lal, Devi Lal, Om Prakash Chautala and Bhupinder Singh Hooda have shown exemplary potential as Jat leaders representing the community’s interests and their tactics, biradari ties and networks have consolidated the Jat vote in Haryana. So much so, Haryana’s political narrative has become synonymous with that of Jats.

The mastermind behind this political narrative was the Jat supremo, Sir Chhotu Ram, in pre-Independence India. With Fazli Husain, he had founded the Unionist Party in 1923. The party came to safeguard Jat interests. Despite its secular credentials, Hindu Jats of Haryana (then southeast Punjab), as they were organised by Chhotu Ram, emerged as an empowered and articulate political community. It was he who built a strong Jat constituency in electoral politics.

The economic and political representation of Jats became the decisive agenda of Haryana’s Jat leaders after Independence. Bansi Lal and Devi Lal tenaciously clung to the consolidation of the Jat electorate in their favour. As a result, in these agrarian landscapes of bhaiachara land tenures and Jat belts of military recruitment, the practical Jat voter continues to be driven by an aggressive impulse to sustain and regain Jat Raj through clan affiliations, khap networks and community leaders. One of the important features of the Jat vote’s tenacity is the promise of Jat Raj. This is an age-old notion that edifies Jats’ propensity to vote with the sanguine hope of their dominance and rule. This is not to deny that real issues like reservation (the grant of Other Backward Classes status), employment and farmers’ interests do matter. Those, too, are important. But the enticing idea of Jat Raj, ensuring the community’s power, status and political leverage in political and bureaucratic structures, conquers all.

In the recent Assembly election, it became evident that Jats continue to play a pivotal role in Haryana politics. They have, once again, moved centrestage. They have shown that they can dismantle the house—or help build a new edifice. So Jats better be taken more seriously. More than ever before.

As long as Dushyant Chautala is there as Deputy Chief Minister, Jats will feel they needn’t worry. Their anxieties are laid to rest. At least, for the time being. The post-election alliance may be good news for them after all.

Nonica Datta
Nonica Datta teaches History at Jawaharlal Nehru University, New Delhi. She is the author of Violence, Martyrdom and Partition: Daughter’s Testimony and Forming an Identity: A Social History of the Jats