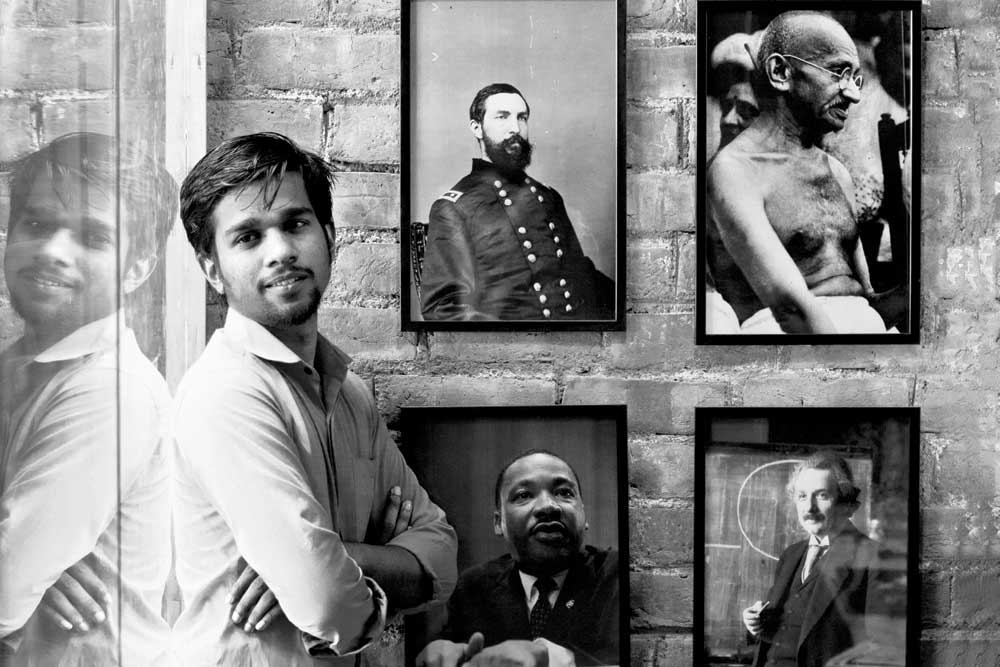 THE BIKE HAS been ripped at its limb. The tightening of screws and mild hammering is music on an otherwise unexciting afternoon in a basement garage where a group of interns have gathered around the bike with spanners and wrenches. They are tucking in an IGT, Intelligent Gear Transmission, near the pedal of the bike, which once installed would transform the bike into a gearless one. The motorcycle’s gears will now shift automatically as you apply the clutch, and with no loss of performance. The device that effects this transformation come as two boxes, the size of a palm and fist, and was conceived in the incubator of Startup Village by Vivek Mohan and Alfred Johnson. Mohan, the 24-year-old CEO of Bisko Labs, calls the venture “a way of redefining everyday devices that dominate our life” and his product “the next big change in the automobile industry”

On a modified Hero Glamour, fitted with an IGT for Rs 3,500, Mohan had toured the National Institute of Design, Ahmedabad, to give students there a demonstration. The excitement among them, he says, gave him a greater high than even the ‘Best Project at World Science Congress on Research and Innovations’ medallion nailed to his drawing room wall. “We already have over 3,000 pre-orders and get at an average ten enquires every week, but selling it as is wouldn’t work because of insurance issues—a bike once modified does not qualify for insurance, and this is why we refrained from marketing the product as is. We published the patent this July and are now already in talks with different big players and OEMs (Original Equipment Manufacturers) like Bosch and Tech Mahindra to take this further,” he says.

The humble Bajaj Chetak cough starts on the courtyard of Mohan’s childhood memories: followed by a bundle of happy faces, his young cousins take turns to get onto the scooter, clutching the handle tight, imitating hoarse honks, pretending to change gears—once a noisy and integral part of the experience, almost the crux of two-wheeler riding knowhow.

For their business idea, Mohan and Johnson took their cue from a change in market sentiment. For most riders today, gear shifting is just a burden, an extra job for a foot they’d rather have free. “An IGT is able to shift gears within 40 milliseconds so that any manual mis-shift gets corrected by the device itself,” he says, “You can drive the vehicle very easily even in heavy traffic. You can have your gear shifting foot free once the device is installed.”

Mohan is part of a new wave of entrepreneurs capitalising on change as India and its people’s relationship with technology reshape themselves. But aptitude often is not enough. The road to success is paved with brilliant ideas that fail the test of market acceptance.

His quest for novelty goes back to his student days. On a monotonous morning in his college hostel at Cochin University of Science and Technology, Kerala, Mohan was sitting on his bed next to a senior who was rocking a metal chair. It was yet another strike day at their college, academic life as usual in Kerala, and they were discussing a pen that would reform digital typing for regional languages. Would it work? It was best given a try. They kickstarted a friend’s bike and took a 15-minute ride to the office of Startup Village in Kalamasherry in Ernakulam. “The idea was simple,” says Mohan, “If you’d draw the Malayalam letter ‘pa’, it would be automatically typed in as ‘pa’ in Unicode. It would help digitalise Malayalam literature and prove beneficial for other regional languages as well.”

Even though this wonder pen never took flight, the trip ensured that Mohan never had to work under a boss. He filled up an application requesting an incubator at the Startup Village. Straight out of college, Mohan and two of his friends set up an incubation centre named after one of the trio’s grandfather’s nickname. Bisko Labs, established two years ago and angel-funded by Guerrilla Ventures of Ritesh Malik, focuses on the development of hardware innovations to redefine everyday life.

IT IS 2012. A group of bikers overtakes the car and Mohan’s parents meet with an accident. The father hurts his leg and is advised bed rest. Back at home, the son pulls forward a chair, a laptop and conjures what sounds like magic. Lying on his bed, with just the motion of his hands, the father can switch the light off and on. “This was developed using Kinect and Arduino,” says Mohan, “I have plans to design a virtual navigation system that will allow a person to take control of an entire house from a single position.”

I never took up a regular job. No bosses, no intrusions

The entrepreneur’s love of gesture control has its origin in magic. He self-learnt a bunch of street tricks from David Blaine’s Mysterious Strangers: A Book of Magic and would try them out on classmates, family and others at social gatherings. “During my early teens, I used to hop by internet cafes and put hidden downloaders in their system and download torrents of programming languages and also download pdfs on magic,” he recounts.

This hobby stirred an interest in gesture control, just the swish of a hand in mid-air could operate an electronic device. “Exploroid was another concept based on gesture control where I was involved. I helped with the technical aspects. It helps turn your car into a smart car—a safer and smarter way to use maps, listen to music, call, text or access infotainment in your car.”

Finding it difficult to juggle time between his girlfriend and his new venture, Mohan also designed a girlfriend-manager app which would stand in for him during his hours at work by sending her pre-scheduled messages and emails. The app was intended to act as a love-life saver for entrepreneurs like him who suffered similar episodes of girlfriend wrath for their failure to make space for ‘me time’.

Turning entrepreneur at 21 came with its set of frustrations, and at times it made Mohan itch to get away from it all. One such evening, seated at a bus-stop, he typed out a message to a dear friend: ‘If I had to take a trip right now, which do you think is better, Chidambaram or Haridwar?’ The first spot he owed to a favourite G Aravindan film, and the second had come from an M Mukundan book he had recently read. Then came a double-beep to reveal three letters on his screen as a reply: ‘Leh’. When he boarded a bus to the railway station, he did not even know that Leh was in Ladakh. He had never left his hometown before. But without a second’s thought or a spare set of clothes, he took a train to Bangalore and then got into a general compartment bound for Delhi. “As an entrepreneur,” he says, “this trip taught me my most important lesson—to trust my instinct.”

When Bisko’s angel investor Malik first mentioned that he would meet them all at his sister’s place in Kakkanad, Kerala, Mohan assumed that he was probably a Malayalee, at least partly. It took a cup of tea and five minutes to understand that the apartment they were in was of his rakhi sister. “He values people and relationships,” says Mohan. “Right after the first meeting, we were sure this guy should be our investor. We had at that time, another firm ready to put a larger amount into the firm, but we said ‘no’ to them and raised the angel round from Ritesh [Malik]. He is a guy who believes in people. He often says,‘People don’t work for people, they work for themselves only,’ so if you want to see the business grow, you have to help the workers see this as their own product.”

Besides being CEO of Bisko Labs, Mohan is also co-founder and CTO of Innov8, yet another brainchild of Malik. Bisko Labs now works at the office premises of Innov8, a venture that incubates new generation entrepreneurs and freelancers in Delhi and Chandigarh.

One of the biggest lessons that Mohan has to offer aspiring entrepreneurs, is to fail well. At Emerging Kerala, a biennial investors summit held by the state government, with the then Chief Minister Oommen Chandy watching, a drone he’d designed—and was part of the inaugural ceremony—had stopped midway after doing a few laps. “During the trial, it had worked fine, but some technical bug cropped up during the final event,” Mohan says, “Though I was disappointed, I reworked it, and I got an opportunity on another occasion to showcase it to the same CM.”

Such failures, he says, have only inspired him to pursue his goals harder. Among ideas that didn’t come through, he counts the brainwave of using an EEG and waving one’s hand over the ear to change music, channels or presentations. A concept derived from it, though, is now going to be Bisko’s next venture, a women’s safety device which would consist of a smart earpiece and a set of earpods that also functions as a health tracker. “It will send out emergency signals when needed and also help track the medical history of a person,” he says, “This would be a boon especially for the ailing, people suffering from epilepsy and the aged who need to monitor their health.” It would, like all his other gizmos, ease life as it’s usually lived.