Will the Maha Alliance Last?

With the immediate threat of the BJP now gone, will they be able to band together for a full five years? 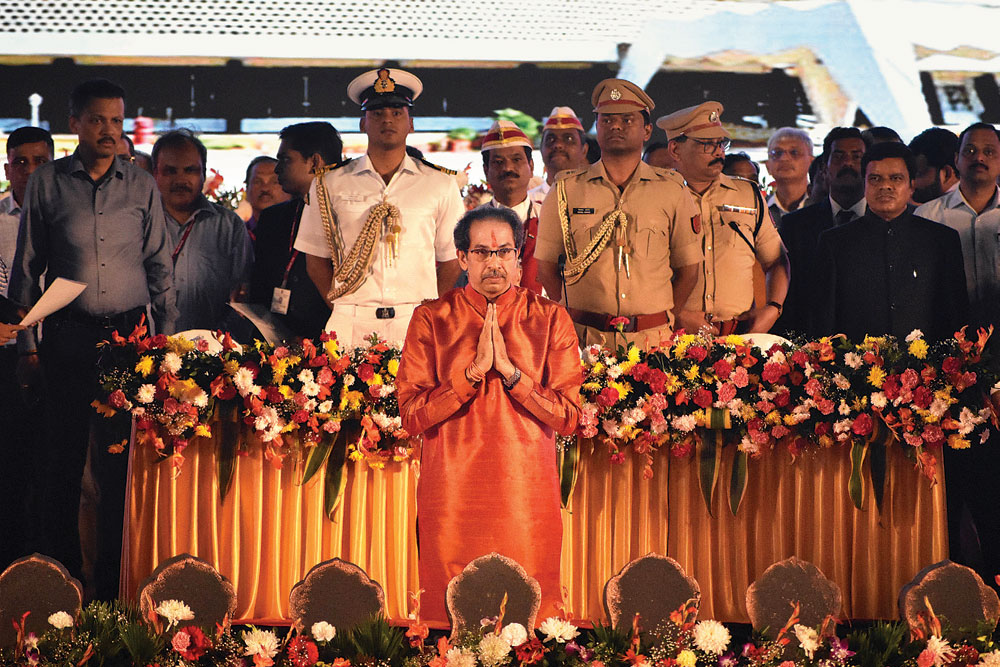 
AS THE DRAMA of Maharashtra’s last few days comes to an end, the curtain now rises on the most unusual show in town. Politics often makes strange bedfellows. But one would be hard-pressed to find a more peculiar ménage à trois. We have now: the Maharashtra Vikas Aghadi government (according to some reports, Sonia Gandhi took exception to an earlier name, the Maha Shiv Aghadi, that was doing the rounds) that combines a hardcore Hindutva party, the Shiv Sena, with the so-called secular forces of the Nationalist Congress Party (NCP) and the Congress.

At various points in the last few decades, members of each of these parties have had a go at each other. They have called each other names and set the government machinery, whenever possible, upon one another.

There is of course one strong glue: power. But can the adhesiveness of power—and a common hatred of the Bharatiya Janata Party (BJP) – resist the pulls and pushes of such varied ideologies? Irrespective of our political opinions, the state clearly did vote for a BJP-Shiv Sena alliance. Will the people be so forgiving of this transgression whenever these parties return to it? Is such a government good for the state? Can it even survive?

“For this alliance to work, the Sena will have to learn how to work with us [Congress and NCP]. It will have to agree with our concerns,” says a senior NCP leader. “Look even we [Congress and NCP] have had our differences in the past. But we have always broadly been in agreement. Now it’s the Sena’s turn to do the same.” According to Surendra Jondhale, a well-known political analyst in Mumbai, the Shiv Sena should be able to soften its Hindutva stance. He points out that the party has been trying to change its image of a hardline rightwing party for some time and this new experience, of leading a government, will in all likelihood present the party with that opportunity. “I don’t expect to see the Shiv Sena of old. They are not going to bring up anything on their own that can make the alliance untenable,” he says.

But there are likely to be several issues in the near future that could imperil the alliance. The Shiv Sena has taken very different positions from the Congress and the NCP on a host of issues that will probably keep coming up in the next few years, from the proposed Bharat Ratna for Vinayak Damodar Savarkar and the Citizenship Bill and the proposed nationwide National Register of Citizens to the debate around the Uniform Civil Code. To make things worse will be the BJP with its 105 elected members at the margins, waiting to point out contradictions and use the slightest of opportunities to topple the government.

For the moment, as analysts point out, several pressing issues are likely to occupy the government for some time. The state is currently under a large debt of Rs 4.7 lakh crore (the second highest in the country after Uttar Pradesh) and the new government is widely expected to pass a farm loan waiver that will cost an estimated Rs 1.5 lakh crore to the public exchequer. Parts of the state have also been reeling under a drought for several years, with the unseasonal rains this year having further impacted crops. The cooperative sector is also in a mess, most visible recently in the collapse of the Punjab and Maharashtra Co-operative Bank. And then there are various sociological issues: several groups, especially after the Marathas were granted reservation, have been demanding similar reservations for their own communities. Back in 2014, the then Congress-NCP government had approved five per cent for Muslims, along with 16 per cent reservations for Marathas. This was revoked immediately after the BJP-Sena government was formed. Will there be such demands again? How will the Sena respond if the NCP and Congress support those?

Several Sena leaders have begun talking about taking a relook at many of the projects undertaken by the Devendra Fadnavis regime. There is already some talk of taking a relook at the Mumbai-Ahmedabad bullet train and the Nanar oil refinery projects. There are also murmurs of examining one of Fadnavis’ pet projects: the Mumbai-Nagpur Samruddhi Mahamarg, a project worth Rs 46,000 crore that is expected to reduce the commute between these two cities from the current 18 hours to eight.

Politically, there is a lot riding on all parties in this new landscape. Nobody has come out looking good after the events of the last few days. If the BJP’s image has suffered in its attempt to make a power grab by tying up with Ajit Pawar, the Congress has crossed something of a lakshman rekha by aligning with a hardcore rightwing party, one that perhaps occupies a position that lies even to the right of the BJP.

But the most is possibly riding on Uddhav Thackeray. He has taken the step of breaking with the family tradition of staying away from constitutional offices and the attendant responsibilities such an office brings. He has also dumped its oldest political ally, the party that now controls the Hindutva narrative, to join hands with its enemies. It may have carved a successful niche for itself as a party of protest, one that is critical of the government of the day, even one that it belongs to, but it is going to be another matter when a Thackeray himself is occupying the Chief Minister’s seat. “We have to remember Uddhav has no real administrative experience to speak of. And now he is going to be right in the thick of it, dealing with all sorts of issues. For the first year or so, he is just going to be completely engrossed in trying to deal with the farmer crisis,” Jondhale says.

According to Jondhale, Thackeray’s decision to break away from the BJP is a calculated one. The NCP and the Congress may be shrinking electorally, but none of those votes are really going to the Sena. “Being with the BJP hasn’t really helped the Sena grow. It’s only the BJP that’s growing. So to ensure that the Sena and [Aaditya] has a future—and I suppose this is how Sharad Pawar must have convinced Uddhav—it must break away from the BJP and explore its opportunities outside,” he says. “Uddhav will be looking at this [government] as an opportunity to expand its base and appeal to more voters.”

For now, the need to come together and outmanoeuvre the BJP, it appears, has brought these three ideologically divergent parties together. An unusual bonhomie was visible in the last few days: from the manner in which they came together at press conferences and show-of-strength events to the Shiv Sainiks staking out the hotels where members of the three parties were hosted. On at least one occasion, some Sena leaders (such as Eknath Shinde and Milind Narvekar) even intercepted rebel NCP leaders who had got away and were about to board flights out of the city.

But with the immediate threat of the BJP now gone, will they be able to band together for a full five years?

A few days ago, when the three parties paraded their elected representatives, 162 of them, at a hotel to show that they had the required numbers, prompting Fadnavis to resign the next day, this was really the first time that the three had publicly come together. Before this, all we had got were press conferences and reports of the three working on the contours of this new alliance. At the event, Uddhav Thackeray turned to a group of photographers to tell them in jest, “[You will need] a wide-angle camera to capture this gathering.”

For the next few years, we may need a lens not just wide enough to capture such a physical gathering but also the imagination to accommodate such a variance of interests.