Where Modi Got It Wrong 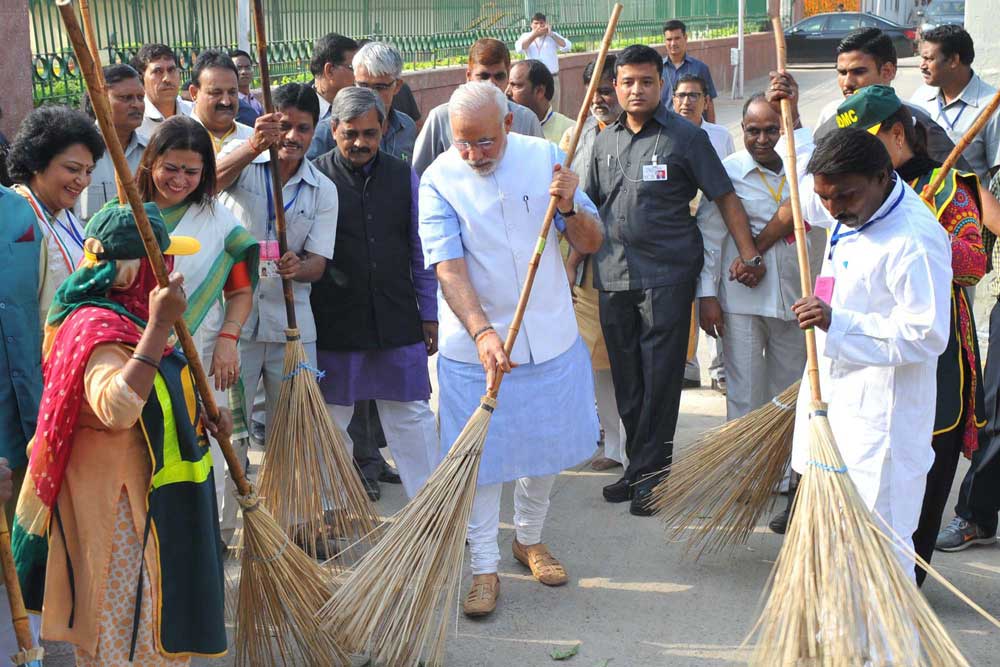 Modi is cast in the heroic mode. He plans and acts accordingly. Heroism is ceremonial. In a ceremony how you do is more important than what you do.

If there is a choice between the flamboyance of manner and the fruitfulness of the effort, the hero will prefer the former. That is because the hero is not a worker. Heroes are not measured with yardsticks of usefulness; just as the worth of ‘conquering’ the Everest is not a matter of bringing back a truckload of mystery or a spoonful of elixir. (How anyone can ‘conquer’ a mountain beats me! The Everest laughs each time it is reported as conquered.) The reason Swachh Bharat Abhiyan stays stuck is that this patently un-heroic mission is cast in a heroic mould. Consider a parallel from Greek mythology: that of Heracles ‘cleaning’ the Augean stables. The story is as follows. King Augeus owned a thousand lusty bulls, productive of an enormous amount of dung. As a result the stables, languishing in neglect, got overrun with dirt. Heracles (also known as Hercules), by way of doing penance for killing his wife and children, was required to clean the stables, deemed by all as an impossible task. Being as clever as he was strong, Heracles improvised the technology for accomplishing this feat in a single day. He redirected two rivers—Alpheus and Peneus—towards the stables. The mountainous filth was washed away, leaving the stables clean.

How does this mythological event connect to Swachh Bharat Abhiyan?

There can be two contrasting approaches to hygiene. The one adopted vis-à-vis the Augean stables is heroic. The other is what people have followed through the ages: the path of routine work; devalued, alas, as drudgery by those who know no better. The insights embedded in the story can afford us much clarity.

-The need for the heroic approach and gigantic effort to hygiene arises out of neglect. A sensible practical approach is to ensure that the stables are cleaned routinely. It is the failure of the routine that shifts the spotlight to the heroic.

-The heroic is not feasible as a working strategy. Heracles cleans the Augean stable as penance; not as work. Envisaging Herculean cleaning as routine is quixotic. Yet, this is how we think this should work. -The heroic mould has its limitations. Heracles does not have the strength or energy to accomplish the work by himself. He has to bank on the rivers. The heroic mode per se will not suffice.

-It is, nonetheless, legitimate to link hygiene with forces of nature, symbolised in this myth by the rivers. That corresponds, in our context, to the power of technology, hydro-technology in particular. How does Swachh Bharat connect to our water-resources management?

-At any rate, the agency of the hero and the resources of technology become imperative only on account of the collapse of the routine. The routine work is, hence, what is truly heroic.

What is conspicuously absent from Modi’s paradigm of clean India is the efficacy of the routine. The hindrance here is our antiquarian, pre-democratic idea of heroism. As long as there is a Heracles, the cleaning of the stables can wait!

There was a time it was believed that the life of the common man could not lend itself to works of literature; especially tragedies. The idea of democratic tragedy is no more than a century and half old!

We need to undergo a similar paradigm shift in our approach to cleanliness. A country does not show itself in a good light if it insists that unless the Prime Minister himself takes the broom, the filth will not yield! The pseudo-heroic bias of Swachh Bharat Abhiyan came to the fore with the appointment of its brand ambassadors! All of them are wonderful people. They are charming poster boys, but not even bonsais of Heracles.

Perhaps the Prime Minister does not realise that historically ‘the charming’ began to enchant public consciousness only after the decline of the heroic. Heracles is heroic, whether or not he is physically charming. Secondly, ‘charm’ is a social concept, not a political one. Irrespective of what some uneducated politicians think, beauty does not swing politics. Third, the charming is, culturally, at a maximum distance from routine work! So, the Prime Minister exposed himself in identifying brand ambassadors. If it is to keep my street clean, I would project an ace sweeper and work alongside.

When it comes to keeping home and life clean, the contributions women make far, far outweigh that of men. But for their soulful, sacrificial work, we’d have had a billion Augean stables. (Let’s leave out 300 million homes that could be kept clean by servants.)

Come now to the two rivers. They offer a few insights.

-Why two rivers and not one? Perhaps it means that a single-pronged attack will not do. An issue needs to be seen from both sides. Why both sides? Modi has seen it from his side. But there is another side: the side of the people. Where are they in all of these? Swachh Bharat can be achieved by Modi only in partnership with the people of India, and not as an individualistic heroic feat.

-What do the two rivers symbolise? That adequate resources and means do exist. The problem is that means are not connected to ends, resources to needs, which is the perennial problem in governance. It is ironic that Modi, the apostle of good governance, overlooks this.

-The task of the leader is not to move mountains, but to facilitate. Augean stables get cleaned on account of Heracles, but not by him. That is the hallmark of a leader who empowers. There is, in other words, distinction between heroism of effort and efficacy of effort. It is the latter that we need.

Finally, the myth also carries with it an implied warning. The heroic or Herculean approach to cleanliness cannot endure. The heroic cannot be routine! Cleanliness is perforce routine. The routine must be embedded in attitude and undergirded by a way of life. Our current attitude spews uncleanness! The heroic, which is an abrupt and transitory intervention, cannot impact attitudes. Heroes impress. We admire, but stay the same. What is worse, we think the hero will deliver and all we have to do is to be spectators of heroic exploits. Heroes disempower! So, dirt will begin to accumulate from the time the hero departs. Heroes think of everything in terms of ‘feats’ and exploits. It is preposterous to think of cleanliness as an exploit.

Uncleanliness issues from an attitude of selfish indifference to everything beyond one’s own interests. No one dislikes hygiene per se. On the contrary, hygiene for oneself is valued, even demanded. What is missing is civic sense, the essence of which is fellow feeling. So, we see educated people disposing of their garbage on highways and roadsides. The heroic mode follows this social reality at a distance.

As a rule, the external world is shaped by who we are and how we are disposed to our surroundings. For murder to happen there must be, first, maniacal anger within the murderer-to-be. Cleanliness, likewise. Cleanliness results from a caring attitude towards one’s fellow human beings. It is the willingness to treat others as we would like to be treated. Public cleanliness, if it is to endure, must stand on the basic notion that the dirt that is unpleasant to me will be unpleasant to others as well.

To think it is the broom, and not the mind of man, that keeps a country clean is a stereotype too simplistic to merit even a rebuttal.

There are in this country still public spirited individuals who, if they see boulders lying on the path they walk, bend down, pick them up and put them aside so that those coming after them, especially at night, may not stumble and fall. They will not be found among the glitterati. Modi could have furthered the cause of creating a clean India more authentically by appointing some of them as ‘brand ambassadors’.

From time immemorial, cleanliness has been the contribution of the ‘unclean’ in every society. The Prime Minister may want to invest hygiene with glamour. But it doesn’t work that way. Glamour produces dirt, never reduces it. After the glitterati leave the stage, the refuse of the society come and clean and ready the site for the next season of grime and dirt.