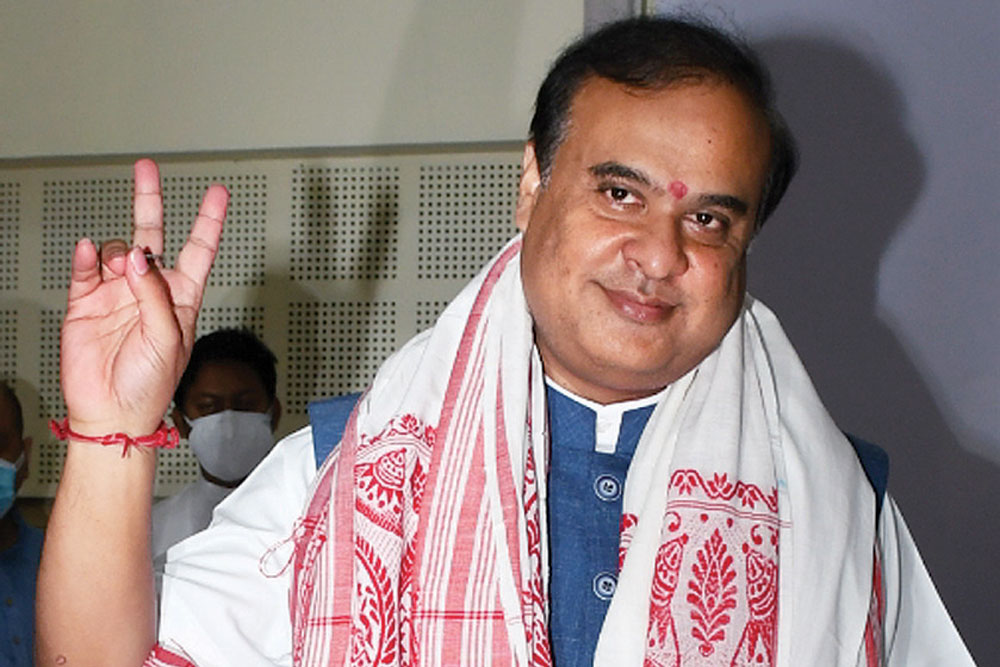 
CREDITED WITH MAKING the crucial difference for BJP in Assam and the Northeast, Himanta Biswa Sarma was instrumental in the party’s victories in the Assembly elections of 2016 and 2021. With the reputation of a man who gets things done, Sarma has awaited his turn to get the top job. Anointed chief minister finally, he spoke to Open about what contributed to BJP’s triumph in Assam and the challenges before his government. Excerpts:

What factors led to BJP’s impressive victory in Assam?

In the last five years, pursuing the vision of Prime Minister Narendra Modi, who has a grand dream for Assam and the Northeast, we have consistently delivered. Governance has been visible and all benefits of government programmes—Central and state—have consistently reached beneficiaries. That’s the biggest reason for our success. The people of Assam have strongly felt that under Modi, there is a government that cares. Some of our social welfare programs, including Orunodoi, have been path-breaking. Our efficient management of Covid-19 in 2020 is also something people give us a lot of credit for, which has been among the key factors determining our success.

Even your party’s rivals admit there was no anti-incumbency. How did the last government’s performance contribute to the electoral outcome?

This was a result of pro-incumbency. What worked for the party was our efficiency, supreme honesty and the extraordinary commitment of our workers to understand and empathise with people’s concerns. From the central leadership to state leaders, including all our ministers, we were visible on the ground, sweating it out with people. There was no drawing room dissection of problems and delivery of solutions on TV debates. The government has delivered in the last five years—if you travel across Assam, you will find happy and smiling faces in even the remotest corners and you can reach there without any hassle since we have a built a fine network of roads. A slew of progressive, people-centric policies in health, education, infrastructure and their efficient execution have been our hallmark.

Where does this leave Congress?

My focus is on further strengthening governance and adding more vibrancy to the party, including expanding our base to newer areas. I would refrain from commenting on Congress, for now.

At your rallies, you repeatedly told your audience that Badruddin Ajmal represented the biggest threat to Assam, its identity and culture. How will the results pan out politically?

Yes, I did say it and I stand by it—that this election was about a clash of culture and identity. I have nothing personal against Badruddin Ajmal. But politically, I had problems with the strand of thought that he represented. To us, he represented a regressive ideology, which denied people the right to dignity and modern education and health facilities, for instance. Our prime minister works for building more engineering and medical colleges; Ajmal spoke of creating more clerics! We have a thriving and vibrant culture. We will not allow it to be subjugated to an alien culture that threatens the social ethos of Assam.

Do you expect BJP’s rivals to sharpen the religious faultlines in Assam?

It is my dharma to protect the people of Assam, their culture, identity and aspirations. We shall do all we can to ensure this.

How will the result impact politics in the rest of the Northeast?

The Assam result is the culmination of a process of resurrection for the Northeast. Ever since Narendra Modi assumed the office of prime minister, the Northeast region has found a special place in his grand vision of a New India. We all have seen how, starting with the Assam election in 2016, there has been the complete annihilation of a party that ruled and ruined the Northeast. A region with so much potential was made to beg and borrow and Congress promoted and propagated a culture of acute indifference to the Northeast. That has changed. The region is beaming with vibrancy. Its politics has matured, governance is visible, people are getting what they deserve and the trend will continue.

You made several ‘expensive’ promises. How do you propose to fund them?

Having had the honour of being the finance minister for many years, I know a thing or two about prudence and fiscal management. You will see these promises being met sooner than we can anticipate.

What is the one issue that really worked: Development or BJP’s focused campaign on Assam’s identity?

A mix of both.

Did the electorate consider civilisational issues as important as bread and butter?

Politics, we have learnt, has also a lot to do with perception. The Assamese are a people full of dignity and pride. An issue of identity, for many, may surpass the existential bread and butter. I would think for many this was a big issue.

But your rivals say that it was only an attempt to polarise the electorate, particularly your stump speeches.

I am known to speak my mind. And on a lighter note, my friends in the opposition camp do not hold a patent on polarisation. Contrary to what they claim, I opened the eyes of the electorate to blatant polarisation of society. I was unifying Assam’s cultural pride and identity, not polarising!

Congress spokesperson Abhishek Manu Singhvi has said BJP is in power in the Northeast on the strength of his party’s erstwhile leaders. Do you think Congress will remain a credible alternative to BJP?

It is for Congress to consider how to deal with its assets. I do not think an ordinary party worker like me can get the same affection from top Congress leaders as I have got all these years from Prime Minister Modi and Home Minister Amit Shah.