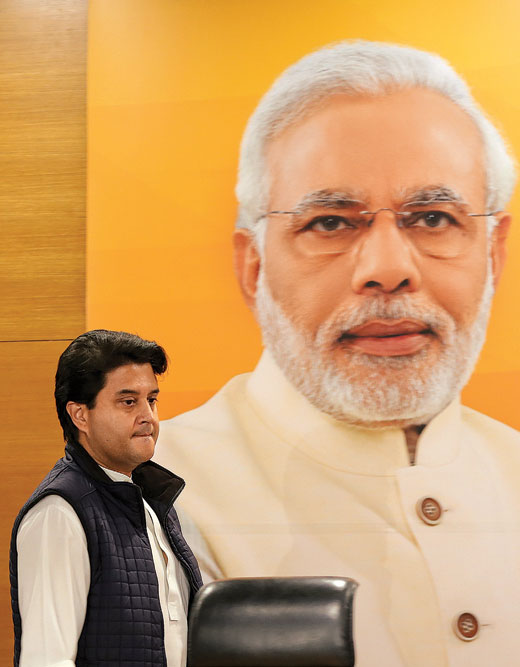 
WHEN TRIPURA LEADER Pradyot Deb Barman was mulling over quitting the Congress in January 2018, his party colleague Jyotiraditya Scindia had dissuaded him from doing so. Scindia told him he had confidence that Rahul Gandhi, then the party president, would keep in mind his interests.

At that time, the speculation was that Deb Barman, Tripura Pradesh Congress chief and scion of the state’s royal family, might join the BJP, following Assam minister and former Congress leader Himanta Biswa Sarma’s meeting with him at the palace in Agartala. Scindia advised him against doing so. Deb Barman stayed back in Congress then but resigned from the party in September last year over differences with its general secretary and Northeast in-charge Luizinho Faleiro. By then, Scindia had himself started getting disheartened with the Congress leadership. “When I left, he understood my reasons and agreed with me. So I was not shocked when he quit the party. I floated my own outfit and did not join the BJP, but his compulsions may have been different,” says Deb Barman, who was with Scindia on the day he resigned from the Congress.

The young Turks in the Congress had lost hope after repeated attempts to reach out to Rahul Gandhi, on whom they had pinned their hopes. Scindia, who was once close to Rahul Gandhi, apparently waited for an appointment with him for nearly five months. Rahul Gandhi denied this allegation saying Scindia was the only Congress leader who could walk into his house at any time. The discontent of some young leaders with the old guards in the Congress had been brewing—openly at times and even within party circles. The Congress leadership either did not get a whiff of it or turned a blind eye, indifferent to any possible rebellion. Scindia’s exit has brought out the fissures, which have been deepening after Rahul Gandhi stepped down as party chief last year following the Congress’s drubbing in the Lok Sabha elections.

After 18 years in the Congress, 49-year-old Scindia not only joined the BJP but also led around 22 MLAs out of the party, threatening to cut short the life span of the 14-month old Kamal Nath government, which survives precariously on a slender margin. Laying bare his disenchantment with his former party, Scindia said the Congress is “no longer the party it used to be.” He also minced no words in showering praise on Prime Minister Narendra Modi and said he believed the country was safe in his hands.
Ideologically, Scindia had started aligning with the BJP around seven months ago, when he supported the Modi Govçernment’s decision on the abrogation of Article 370 in Jammu and Kashmir, a core promise made by the party in its manifesto. His grouse with the Congress leadership was known by then. When Kamal Nath was made Chief Minister after the Assembly elections in November 2018, Scindia was left feeling that he did not get his due for his contribution in the polls, in which the Congress managed to wrest power defeating the BJP. Given the uncomfortable arithmetic in the Assembly, at a time when the BJP under the leadership of Amit Shah would not miss an opportunity to turn the numbers in its favour, the Congress chose septuagenarian Kamal Nath, an organisation man, over Scindia, whose popularity stems more from personal charisma. Kamal Nath still claims to have the support of 95 MLAs. The number, however, may not be enough for him to save his government in a shrunk House after the resignation of 22 MLAs from the Congress. The BJP has 107 MLAs, marginally more than the required 104. Congress leaders are claiming some of them will return to the party’s fold. Scindia’s move has posed a challenge for the Congress’ veteran strategists Kamal Nath, Digvijaya Singh and Ahmed Patel. Madhya Pradesh Speaker NP Prajapati had asked the 22 rebel Congress MLAs to appear before him on March 13th, just as the BJP has demanded a floor test on March 16th.

Known as ‘maharaj’ among party workers in the state, Harvard and Stanford-educated Scindia, who belongs to the royal family of Gwalior, lost the Guna constituency, a family turf, in the Lok Sabha election in 2019, to his former loyalist Krishna Pal Singh Yadav, who had switched over to the BJP. Even in the Modi wave of 2014, Scindia had managed to retain the seat, which no family member had lost ever since his grandmother, Vijaya Raje Scindia, won it in 1957 as a Congress candidate. After Vijaya Raje, who later held the seat as a Bharatiya Jana Sangh and then BJP candidate, Jyotiraditya’s father Madhavrao Scindia won the seat. Madhavrao too had begun with the Jana Sangh, but later joined the Congress. After he died in a plane crash in 2001, his son won the seat for four consecutive elections from 2002 to 2014. In 2019, the BJP put its might behind his rival, who used to be Scindia’s constituency representative, to ensure Scindia’s defeat. Yadav later dubbed it as an election “between nationalism and dynasty.”
With his Lok Sabha constituency in the hands of the BJP and increasingly feeling sidelined in the party in his home state, Scindia was hoping to get a seat in Rajya Sabha and the post of state party chief. While Congress leaders claim he was being offered a place in the Upper House, sources close to him say the party leadership was dilly-dallying. Scindia made his discontentment apparent when he wrote ‘this is a path that has been drawing itself out over the last year’ in his resignation letter sent to Congress president Sonia Gandhi, after his meetings with Prime Minister Narendra Modi and Home Minister Amit Shah. The BJP promised him a nomination to Rajya Sabha, which Scindia is likely to file on March 13th.

A young Congress leader said his joining the BJP was unimaginable. Rajasthan Deputy Chief Minister Sachin Pilot, another young leader in the Congress who was denied chief ministership in favour of veteran Ashok Gehlot, tweeted: ‘Unfortunate to see @JM Scindia parting ways with @INCIndia. I wish things could have been resolved collaboratively within the party.’

With the Congress unable to revive itself to take on the BJP, and an increasing apprehension that he was losing clout within the party in the state and at the Centre, Scindia took the plunge, moving into the rival camp to remain politically relevant. Earlier, Himanta Biswa Sarma, now the BJP’s pointperson for the entire Northeast, had also quit the Congress upset with party veteran Tarun Gogoi in Assam and the leadership of the Gandhis.

“The Madhya Pradesh government was formed with the efforts of Maharaj. He was not given any post. Respect is important. We are with him in his decision to join BJP,” says Ismail Khan Pathan, a Congress loyalist from Scindia’s home turf, who has also worked with his father. For Scindia, whose two aunts— Vasundhara Raje and Yashodhara Raje— are both in the BJP, the shift is as he himself put it, a “fresh start”, yet as one of his aunts said he is “in the same team” now. It is to be seen what lessons the Congress draws from this.