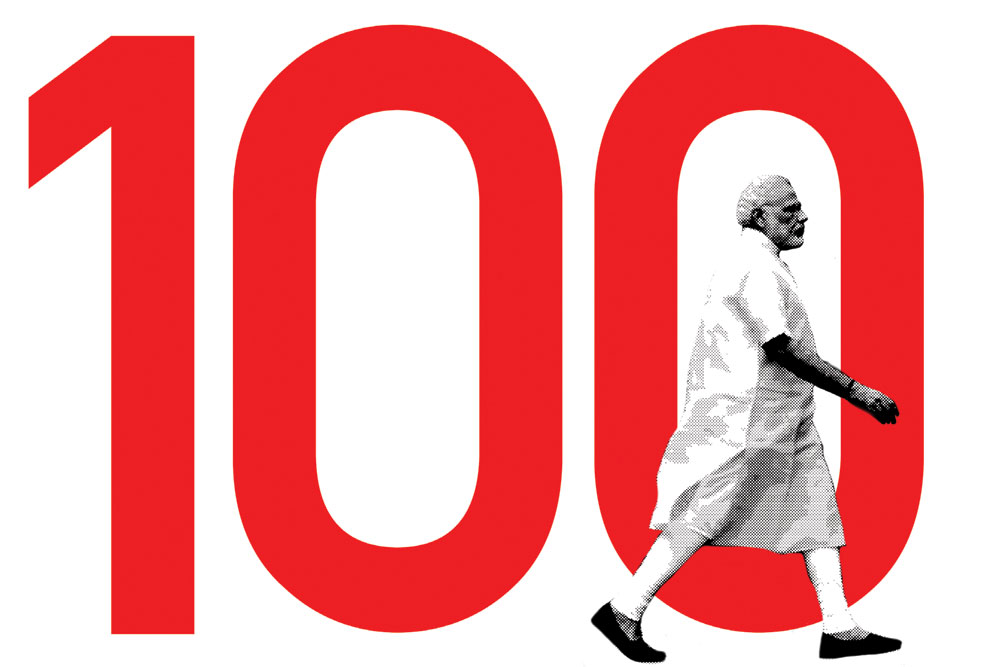 
THERE’S SOMETHING VAIN about touting achievements of the first 100 days in the life of a government. There is, no doubt, a certain value—call it public relations spin or propaganda—to highlight such claims. In a country like India, this seldom works: 1,725 days later, no one remembers what happened in the first 100 days. By then the heat of keenly contested elections vaporises the memory of early days. From that perspective, what Narendra Modi and his Government have done (or not done) is unlikely to be forgotten soon.

In the welter of claims, counter-claims and controversies, three images stand out. First, muscular nationalism—of which Modi is the exemplar—is here to stay. It is striking that alternative ways of imagining what India should be, the liberal conception, the ‘muddling through’ option—the staple of centrist parties—and the idea of a strongly federal polity, all stand diminished. There are no convincing explanations so far for how (and why) this has happened. But two results are clear: the suddenness and intensity of the collapse of alternative ideas and the great liberal fear that when combined, religion and politics can form a formidable and dangerous combination that cannot be tamed.

Explanations for this will have to await calmer times but one initial thought comes to mind: perhaps the fear of ‘Hindu nationalism’ lay at the root of the present crisis of alternatives. Maybe too much energy was spent to demonise ‘Hindu nationalism’ and that has come back to haunt everyone involved in that project. It is not accidental that Modi, the politician most closely identified with conservative Indian nationalism, has gained the most from this backlash. At one time, his established and emerging political rivals thought that demonising him personally and running down nationalism would do the trick. In retrospect, the potential gains from such a strategy were always limited. But such was its intellectual power that it confused criticism with political viability. Now, much chastened, Modi’s rivals are very careful in criticising him.

Second, this clearing of the field so to speak, has allowed Modi to engage in extraordinary political projects that were inconceivable even five years ago. Right from the time the Constitution was launched in 1950, India as a nation-state has rested on a series of compromises. From the special status for Jammu and Kashmir to virtually immutable personal laws for minorities, these provisions created a special class of regions and citizens who were placed on a different legal and Constitutional footing. In 1950, three years after Partition, these measures were considered essential to impart confidence and a sense of belonging to these citizens and regions. Even then, there were voices that warned against these steps but at that time it was easy to dismiss them as ‘communal’. Seventy years later, however, these measures acquired a malignant political character. In Kashmir, Article 370 became an article of faith for separatists and even the so-called mainstream political outfits: for the former it was a psychological device that made it clear that Kashmir could be independent one day. For the ‘mainstream’ it allowed an uninterrupted reign of pelf, one that would have put Pareto’s Foxes and Lions to shame. Similarly, the persistence of triple talaq as a measure to end a marriage ceased to be just that and turned into a political veto in the hands of Muslim clerics and political outfits. Politically, it became impossible for anyone to challenge, let alone get rid of, these measures. Centrist politics in India—called by any name, federalism, liberalism or whatever ism—was wedded to these pernicious ideas.

For these reasons the abrogation of Article 370 and legislative reform to Muslim divorce law stand out starkly against the usual norms of what is acceptable and what is untouchable in Indian politics. These changes could not be carried out until Modi was unassailable. It was not just a matter of legislative majority but also ideological dominance that was essential. The reaction has been interesting: it is loud and sterile at the same time.

There are cries now that Indian democracy—no less!—is in danger from majoritarianism. But this begs the question: what is democracy all about if one removes latter-day ideological encrustations around it? It is simply an exercise of the will of the people. In that, contemporary India is no different from established democracies anywhere. If anything, Modi is careful not to tinker with any institutions at the formal level. The claim that institutions under his watch have become impotent is another way of saying that in ‘normal’ times these very institutions—conceived as politically neutral—could be turned into vehicles of political opposition to a lawfully elected government. No one says so but that is the rotten secret of elite liberalism in India. When someone says the judiciary has been ‘compromised’ or that the legislature goes about executing zombie-like motions, what is being implied is that institutionalised subversion is no longer an option.


The claim that institutions under Modi’s watch have become impotent is another way of saying that in ‘normal’ times these very institutions could be turned into vehicles of political opposition to a lawfully elected government. No one says so but that is the rotten secret of elite liberalism in India

Finally, there is a third image as well. But unlike the first two that cast Modi and his Government in a mellow light, this one has the potential to undo, if not unravel, the first two images. To put it mildly, the economic performance of the Modi Government has been disappointing. To be sure, India’s economic growth continues to clock 5 per cent but that may be illusory. Sustained growth of 7 per cent-plus is essential to end structural poverty, which is simply not about lack of opportunities in an economy but more about the inability to make use of these opportunities. What economists call ‘poverty traps’, where the issue is more sociological and not economic, requires much higher growth. That hands enough resources to a government to spend the extra amounts needed to reduce poverty. At the moment, the Modi Government is scrounging for any money it can lay hands on just to meet normal expenditures. This situation could have been avoided by carrying out crucial reforms in the land and labour markets. But the time for those supply-side reforms is now gone: India is now in a crisis of dwindling consumption growth.

In this, it has to be said the Government is more or less clueless. Should the task of bringing the economy back on the rails be carried out as a sector-by-sector repair? Or should there be an economy-wide resuscitation plan, say, by a combination of greatly reduced policy rates by the central bank and a systematic effort to reduce the value of the rupee so that exports can grow? In the din of noise around falling growth and disappearing jobs—something that can unnerve any government—the Modi Government seems to be veering around the first approach. That will be a mistake: governments cannot pick sectors for saving (or destruction for that matter), that is a job for the markets. What a government can do, however, is reduce market frictions and eliminate them as far as possible.

Here the ideological legacy of the BJP, which has always harboured doubts about free-market capitalism, comes in its way. It is another matter that any government can design and create institutions to save those citizens who lose in a market-driven distribution of income and wealth. Even diehard economic libertarians have to agree with such a proposition in an age of galloping inequality. But call it an Indian phenomenon, the temptation to control things comes in the way. That is an illusion. Even at this stage, economic decline can be arrested. Immediate measures—lower policy rates and devalued currency—can go some way in alleviating pain. This, however, has to be followed by land and labour reforms. The fact that Modi has the political capital to do this, but does not want to, is the big political why of our times.