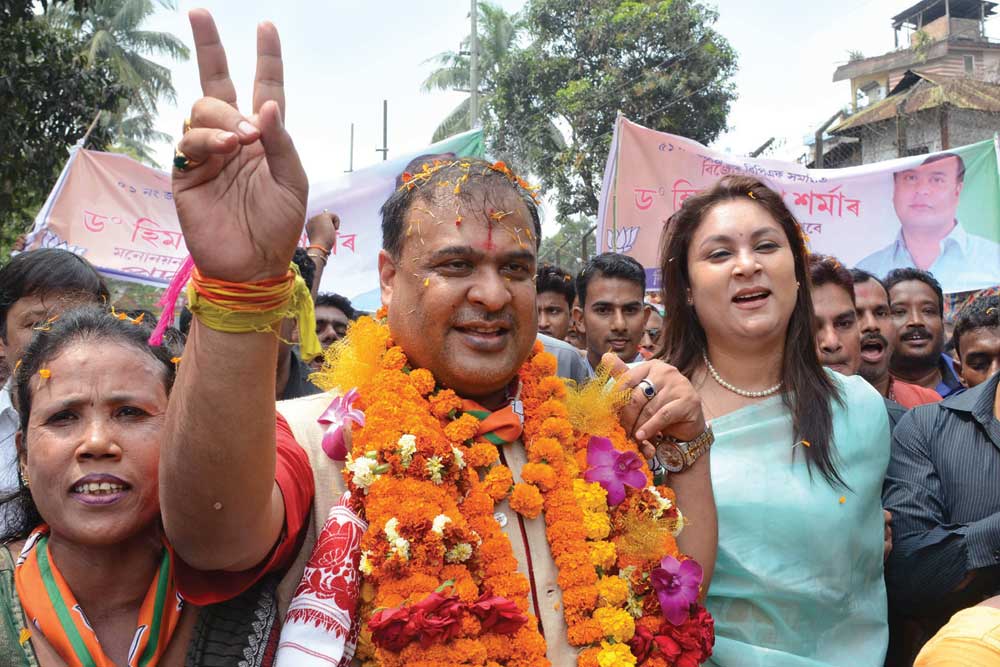 The senior Assam minister and a key strategist for BJP’s northeast conquest was appointed in-charge of Tripura last December by party president Amit Shah. At 10 pm, he is still at the party office in Agartala talking to some of the party’s candidates, all of whom have shifted allegiance from the Congress. Sarma, 48, is himself a former Congress leader, a party he was part of for 23 years. The review meeting goes on till midnight. “It’s a 24×7 job,” says Sarma. His strategy for the party begins with plans to wipe out the Congress from a region it has held sway over. The first test was in Assam, where, in 2015, the three-time Congress MLA switched over to the BJP, a party which had never won any northeastern state until then. He soon became BJP’s northeast face and convenor of the North East Democratic Alliance (NEDA). Later, Sarma was credited with installing a BJP government in Manipur, where the party, despite winning just 21 seats, seven less than Congress, managed to achieve power. In Tripura, the BJP has brought Congress leaders into its fold, consolidating anti-Left votes. A meeting he had with the working president of Tripura Congress, Pradyot Kishore Debbarma, grandson of king Bir Bikram Kishore Debbarma Manikya, sparked off speculation that he was trying to convince the Congress leader to switch loyalties. The bigger challenge for Sarma is Mizoram, a state with a 99 per cent Christian population, when it goes to polls later this year. For now, his next destination is Meghalaya, where he is all set to confront his former party again.

Ram Madhav, General secretary in charge of the northeast 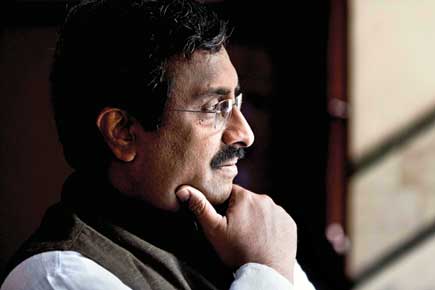 At the end of a busy day, a confident BJP general secretary in-charge of the northeast says it will be “3-0 in NDA’s favour,” referring to the three northeastern states headed for Assembly elections this month. If he is proven right, it will take the BJP-led NDA’s score in the region to six out of eight. Madhav, 53, who has been shuttling between the states in the region, has been watching the trends closely in every by-poll since 2015. His research-oriented approach revealed that the Congress was declining. That formed the basis of his strategy to bring the BJP into the picture in this uncharted terrain. The challenge was to make what was seen as a cow belt party acceptable to all, cutting across the demographical diversity of the region. An RSS pracharak who was deputed to the BJP in July 2014, he used his micromanagement skills to make sure that party leaders made regular visits to the region to build up the confidence of the local leadership. In Tripura, where the party is seen as an alternative to the CPM, Madhav projected a fresh face—that of Biplab Deb, a former RSS worker. In Meghalaya, he has ensured his party contests a majority of seats while retaining a cordial relationship with its ally, the National People’s Party (NPP). During his regular visits, he has put in place a mechanism to connect the BJP’s central leadership with that of the states. 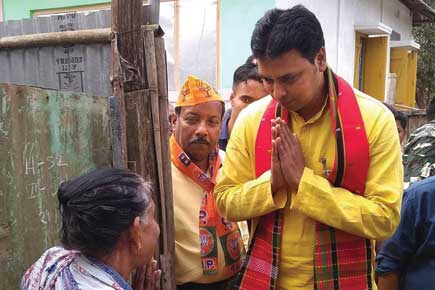 The unannounced face of the BJP in Tripura, he could be the next Chief Minister if the BJP topples the Manik Sarkar government that has ruled the state for 20 years. Contesting from Banamalipur constituency, the 46-year-old state party chief proclaims, “Let’s bring change,” at a road show in Agartala. Propping up Deb is part of the party’s strategy to project a fresh face in the state that has been ruled by a 69-year-old Marxist. A former Rashtriya Swayamsevak Sangh worker, Deb was born in Jamjuri village in Tripura’s Udaipur district. He left for Delhi in 1998 to look for a job and involved himself in RSS work. The turning point came in 2015 when some Sangh leaders suggested that he return to Tripura and take care of party work. A BJP membership drive was on and he was sent to the state as a kendriya prabhari (central in-charge). The party membership went up from 10,000 to 250,000 soon after he took charge. Deb says he has already set out his priorities if his party comes to power—addressing law and order problems without political interference in the process, setting up a committee for employment opportunities and implementing Seventh Pay Commission salary scales. 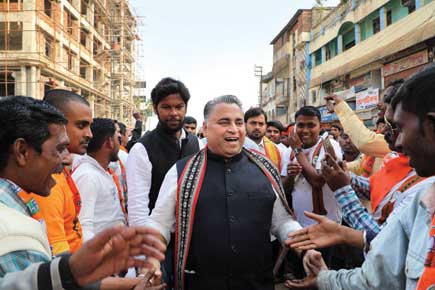 When he first went to Tripura in 2014 as the state in-charge—part of party president Amit Shah’s first team—people told Deodhar that his party would get five, or at most six, seats in the 60-member Assembly. It was by-elections in two seats—Pratapgarh and Surma—in 2015 that gave him hope. Though the CPM won both seats, the BJP’s percentage of votes went up, surpassing that of the Congress, a sign that the saffron party could become the Left’s main political rival. Since then, Deodhar, a Maharashtrian who has picked up Bengali, has spent most of his time in the state, renting a house in Agartala for himself and his team. “I realised we had at least two years to plan our fight against the Left, which has ruled for 25 years,” says 53-year-old Deodhar, who now wears a traditional Tripuri risa (scarf) around his neck. As a pracharak of the Rashtriya Swayamsevak Sangh, Deodhar had worked in Meghalaya for nine years, picking up many local languages, including Khasi. He later ran an NGO, My Home India, which was aimed at bridging the awareness gap between the northeast and the rest of the country. When Nitin Gadkari became BJP president, he wanted Deodhar to do similar work for the party and set up the Northeast India Sampark cell, making him its national convenor. In the 2014 General Election, he was campaign manager in Modi’s Varanasi constituency. Once the Tripura elections are over, Deodhar is likely to move on to Meghalaya.

Rajat Sethi, Political Advisor to the Chief Minister of Manipur 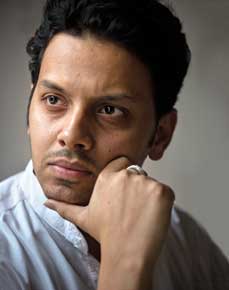 The 32-year-old IIT and Harvard graduate has been working behind the scenes with BJP leaders and helping out with organisational matters as well as their campaigns since the Assam elections in 2015, when he started working with Ram Madhav. In Tripura, when he and his core team of 10 members started looking for a catchy slogan with a local flavour, they zeroed in on ‘Cholo Paltai (let’s go for change)’. What followed was a lot of discussion, testing and questioning if the slogan had a connect with voters. “It is now a household slogan and has become a battle cry,” says the political campaigner. Amplifying the party’s message, he concentrates on data crunching and works closely with local leaders who understand the dynamics of the place. He and his wife Shubhrastha, a Delhi University alumna who also works for the BJP, have come out with a book, The Last Battle of Saraighat: The story of the BJP’s rise in the North-East.

Breaching the Bamboo Curtain
‘There is No Anti-incumbency in Tripura,’ says Manik Sarkar 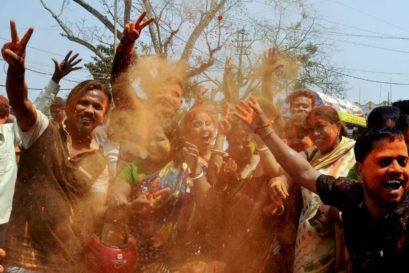 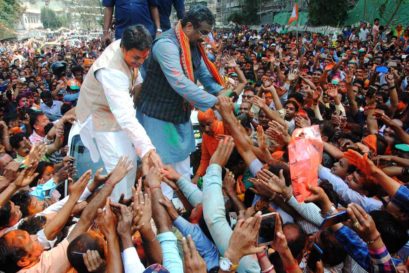 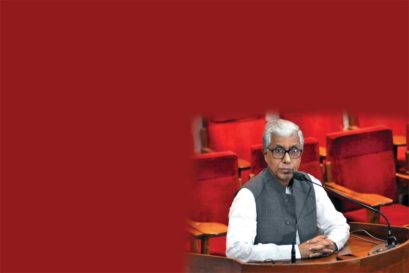