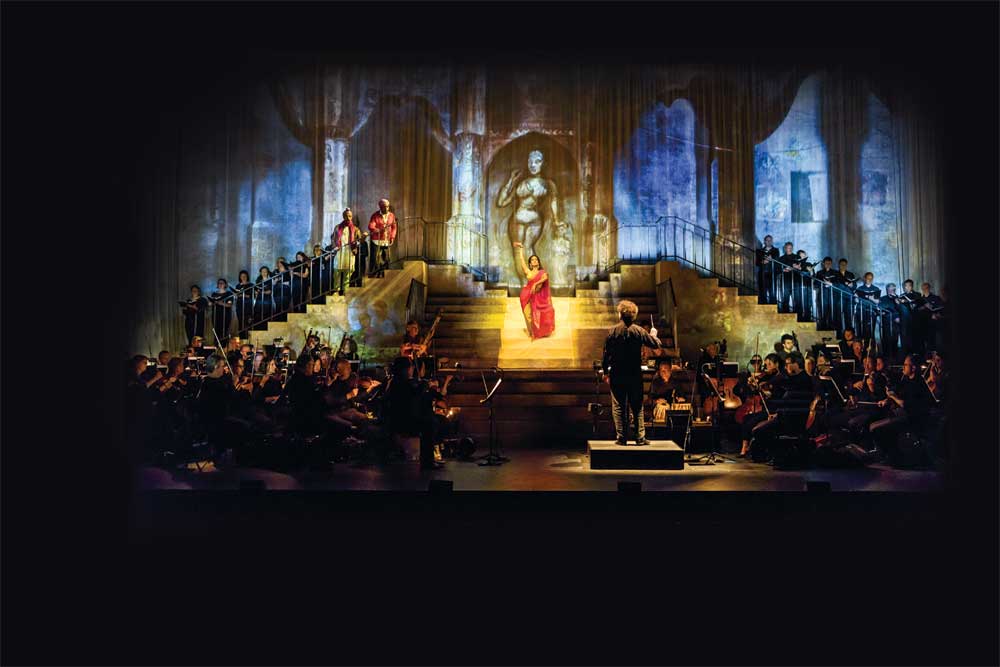 ‘…You,
Rarely worshipp’d, have the power
To disrupt calendars, make politicians
Pull their pants down, businessmen
Forget appointments pencilled in diaries,
To call the tyrant from his rage
And make a young girl weep; you have the might
To make a fuck seem more urgent than war.
A sage turns into a fool, a fool an athlete,
A grandfather a teenager – at seventy, you catch
And make him, to the scorn of his hoarse throat,
Abuse young lays of love: what godlike power
Hast thou not power upon?’

THIS IMPASSIONED verse by the demigod twins of Indian mythology, is a fitting, ode to the Hindu god of love, the incorrigible Kamadeva who arms himself with the arrow of desire and wreaks havoc in the heavens. In the Mahabharata this is a micro chapter. But novelist Amit Chaudhuri makes it a fervid libretto: a near-caustic but warning tale of princess Sukanya, who, at a very young age, marries the old sage Chyavana. Sukanya and Chyavana’s love is new, and the Ashwini kumaras (the twin horsemen), overcome by longing and endowed with the powers of restoring youth, throw open a challenge to prove their love, where the winner takes all (in this case, it’s Sukanya and her youth). The wise Chyavana accepts and now Sukanya must tell her husband apart from the mischievous twins who have taken on his appearance. And as all love stories must go, Sukanya makes the right choice.

Barely concealed in Chaudhuri’s verses is also a soaring paean to the late Pandit Ravi Shankar and his love for his wife, Sukanya, who was 34 years younger than him. And that is where it all began.

One day, in the mid-Nineties, Shankar asked his young wife’s mother about the origins of Sukanya’s name. ‘She told him the story from Hindu mythology, in which the beautiful young Princess Sukanya marries an elderly sage and remains faithful to him in spite of temptation from two mischievous young demigods. My father was enchanted by the story, and said he would love to make it into an opera,’ daughter Anoushka tells The Guardian, ‘The joke in the family was that my mother was named in a prescient manner; the legend of Sukanya deals in its essence with a young woman who, through her devoted love, brings her older husband back to youth (with the help of some demigods). My mother and father were 34 years apart in age and my father got to experience a new marriage and family life with her from his 70s onwards. Their love felt alive and youthful, even at the end.’

Shankar began devising the concept in 2005 with British conductor David Murphy, who ended up working with him for 15 years and continued Shankar’s work even after his death. “It so happened that a copy of Amar Chitra Katha, about the story of Sukanya, was lying around at his place. That was my introduction to the story,” says Murphy, “The story and his marriage with Sukanya is an uncanny coincidence.”

Between concerts, ailments and surgeries, Shankar’s dedication to Sukanya was unwavering. “It got intense in 2012 when he was to go for his heart surgery and he knew that it could end either way,” says Murphy.

Shankar had envisioned Sukanya as the first-ever “semi-staged” production that brings together Western classical opera and a Hindustani classical score. Co-produced by London Philharmonic Orchestra, Royal Opera House and Curve, Leicester, and with Murphy and Anoushka at the helm, Sukanya opened recently in Leicester, UK.

Murphy’s contained voice escalates with excitement as he discusses the process over a static phone call. He has barely recovered from the last performance on May 19th at Royal Festival Hall, London. “There were moments when it felt like he (Ravi Shankar) was there,” he says, “Is this how he would have wanted it? This is the first time so many different aspects had come together, and it has been challenging.”

Shankar had left clear instructions for Anoushka and Murphy before his surgery in December 2012. “They were very technical instructions, pertaining to the order of the ragas. Anoushka had been working with him ever since she was a child, and I was lucky enough to work with him later on. It was a relatively simple process of filling in the gaps, and it was possible for us to finish it,” says Murphy.

Reflecting this complex layer of sounds is the choreographed dance drama by the award-winning Aakash Odedra Company and projected visuals by Tony Award-winning 59 Productions, (who worked with director Danny Boyle to create design, animation and film production for the 2012 Olympics opening ceremony in London).

Was it strange for those who knew Shankar to comprehend this kind of union? It didn’t make sense until they began rehearsing, says Murphy. “There were moments when the Indian music had to fit into the tight structure of Western Classical and vice versa. Everybody was out of their comfort zone and stretched beyond their limits,” he says. But the result, he adds, reflects Shankar’s endless pursuit. He tells us how: Sukanya opens with the strains of the sitar by Parimal Sadaphal, Shankar’s disciple, as the orchestra slowly blends in, imitating the vibrating descant of the stringed instrument. “The Eastern and Western sounds are gradually introduced. People can listen to a unique sound, as it fuses into each other,” says Murphy.

Moreover, Anoushka notes in The Guardian, ‘He has left a personal message in the music: he has used my mother’s favourite raga, Yaman Kalyan, throughout the score. She says it was the raga he was playing at the moment she found herself falling in love with him.’

MUCH OF SHANKAR’S stagecraft for Sukanya derives from his relentless study of the masters of Western Classical such as Mozart and Wagner. He saw similarities between Wagner’s concept of gesamtkunstwerk (‘total work of art’)—in which he synthesised poetic, visual, musical and dramatic arts, with music subsidiary to drama—and the Indian tradition of dance drama. The multiple textures, complex harmonies and grand scale, moreover, translated into his own aesthetics of fusion.

He is a product of many cultures himself—born in Varanasi to a Bengali family, with a lawyer as father and unlimited access to the arts in the family. ‘Nada brahma’, or the sound of God, as he called it, had brought to his doorstep George Harrison and Yehudi Menuhin, along with recognitions including the Bharat Ratna, three Grammies and honourary doctorates from universities in India and abroad.

A noteworthy experiment in the production is Chaudhuri’s libretto, termed a “real wildcard” by a critic, created in the absence of Shankar. The 55-year-old novelist was brought on board by the Royal Opera House and Arts Council England three years ago. “The myth was in my head and that’s how I saw it—as an old man’s love and passion,” he says. Chaudhuri has drawn from literature, such as the works of Rabindranath Tagore, TS Eliot, Walter Benjamin, verses from the Mahabharata and his own book, Afternoon Raga. He adds, “I was re-reading WH Auden’s essay and he discusses the various kinds of love. It ended with The Two Noble Kinsmen, whose authorship is uncertain. It’s about a man talking about love and the depredations and rigours of love, and presumptions of old people in love. Love makes us do weird things and makes old people do inappropriate things. That made me think about the theme,” he says.

Sukanya is likely to land in India next year. The fabled wise sage’s passion and love continues to hold the world in its grip, traversing borders and imagination. “I think it sums up everything he did creatively—he began his life as a dancer and then moved to music, and later became fascinated with films, all of which are in the opera,” says Murphy, who admits that there are many incomplete projects that Shankar left behind, which will unfold in the course of time.