On our schizoid relationship with the social web 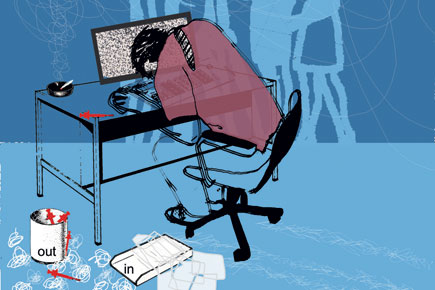 On our schizoid relationship with the social web


For as long as I can remember, I’ve had a certain distaste for celebrity followers. It’s been reserved mainly for the followers, mind you, not so much the celebrities. You wouldn’t, for example, catch me dead with a copy of a certain celeb-crazy newspaper. I’d rather read The Hindu. That’s been my public persona, but my Facebook friends have been crowing lately they know otherwise. A few days ago, a ‘social reader’ application told them that I’d been reading about Morgan Freeman marrying his adopted granddaughter. The app also told them I like reading about supermodels and their sordid sex lives. I can see my carefully cultivated image disintegrating. I don’t like it.

As someone who works with social media, I check my Facebook profile once a day. My Facebook wall, every 30 seconds. The profile—now called ‘Timeline’—is where I decide (or think I do) how I would like the world to see me. ‘Irreverent’, ‘maverick’, ‘anti-establishment’. That’s how I project myself, but last I checked, there was an advertisement close to my picture. ‘Do you want a partner like Savita Bhabhi?’ it asked, displaying the photo of a smiling twenty-something girl. Like my mum, Facebook was chastising me for being single.

Facebook isn’t the only one slowly picking up on me. Google decided that everyone I accepted on Google+ and let into a ‘Circle’ called ‘Unknowns’ should be able to chat with me while I check my Gmail. It didn’t realise that I didn’t know these people, that I had nothing to say to them. Web Monkey’s Scott Gilberton explains that Google automatically uses information to feed all its other applications. The company didn’t think asking me first would be necessary. Apple, the other tech giant, has been slowly keeping track, via GPS no less, of every place I’ve been to. They need ‘to determine quickly and precisely where a device is located’ to provide better location services, explained Apple in a letter that Wired’s Brian X Chen reported on.

You think I’m being paranoid? German politician Malte Spitz sued his telecom operator to get all the information it had on him. The New York Times reported that ‘35,831 pieces of information were sent to him by Deutsche Telekom’—that is, they knew every place he had visited in the previous six months.

I don’t know what social networks know about me. I might have waived away all my rights when I clicked ‘I agree’. And I’m not sure that’s a bad thing. ‘Know Your Customer’—KYC as my bank calls it—is the basis of any business. You can’t make money if customers don’t buy your product or service. You can’t sell them things if you don’t know what they want, where they are, and what they like. ‘Traditional’ marketers tend to throw advertising at you and hope it sticks. Often, it’s like selling a comb to a bald person. Modern businesses want to sell you that anti-balding lotion just when you realise you’re losing hair. Media wants to sell you that lotion to be able to pay for itself.

Till the social web came along, it was almost impossible to find that information. Now they don’t have to search, we tell them everything ourselves. In fact, in the student community, whose social media usage has been extensively studied, Young and Quon-Hassee, published in Journal of Computer and Information Science, ‘found that the larger students’ Facebook network size, the more information is revealed in their profiles.’ It’s not because businesses are coercing it out of us. We’re doing it because we get something in return.

Facebook and Gmail are free. Try setting up a server that lets you upload pictures, share every thought, know about your friends, or just send and receive email: it’s cumbersome, you need to have a certain level of technical knowhow and it doesn’t come cheap. Plus, there is no guarantee that what you set up won’t crash or need maintenance. But if you sign up for Facebook or Gmail, it’s a breeze. All they want in return is that you look at the advertisement they show you. In fact, Google’s numbers for the year ending June 2009 show that 97 per cent of its revenue came from advertisements. That’s something even our celebrity-obsessed newspapers haven’t been able to do.

For advertisers, the social web works best. As Facebook’s ad page and Google’s Advertising Programs website explains, advertisers only pay for ads that people see (called ‘impressions’) or ads that people click on (‘click throughs’). If the ad reaches the wrong person, the social network doesn’t charge the advertiser for it. Companies can target ads sharply, focusing on your location, demographic details and preferences (all your ‘likes’ on Facebook and ‘+1s’ on Google), and then pay only if you show interest.

And even then, you don’t lose. Most of us ‘like’ things on Facebook because we want to tell everyone that we like it. We want our friends to know our favourite music, movies, books and so on. It helps us find other people like us and believe our friends are just like us. This can be clearly seen in a survey carried out by Facebook on Facebook. Most respondents said they ‘liked’ things because their friends did. Advertisers use this information to target us with things that we might like too. Thus, we get access to products and services that are more in tune with what we want. After I ‘liked’ books by William Gibson, Richard Morgan and Bruce Sterling, an ad for science fiction inspired T-shirts started showing up on Facebook. I bought three.

Google’s new privacy policy ‘allows Google to create a broader profile of that user and thus target advertising based on that person’s interests and search history more accurately’. So it can now see what you’ve been up to on Gmail, Google Search and even what you watch on YouTube, explains Gabriele Steinhauser.

But there are benefits, as mentioned above, and in a country always on the lookout for a good deal, it’s easy to see why we’re such social media addicts.

Giving up piracy to social networks is not the same as letting the mafia bug your house. For some time now, public opinion has raged against ‘technology giants’ that want to violate our privacy and/or control everything. I find that argument lazy. Over the years, Wired, CNet and other technology sites have written on lots of new social networking sites, like Diaspora or Color, that give you greater control over ownership and privacy. There have also been web search leaps with new engines like WolframAlpha that can even predict flight paths for airplanes. And if you want to abandon Apple’s iPhone, the market offers Android smartphones in every shape and size. If you don’t like the leader’s deal, you can switch. And like house-hunting, if you want to shift, you must make the effort to search for an option.

All the sites I have mentioned have a public privacy policy, if you want to know what they’re tracking. You just need to read it. If that’s too much, they give you step-by-step instructions on picking what you want revealed to them and what you want to keep secret. Finding those instructions is not as easy as putting up a status message or posting a picture, but if privacy is your concern, you need to make the effort. Demanding that websites change is simply lazy.

The criticism that rivals level at leading social networks is along similar lines—and hypocritical. Let’s face it, most online businesses don’t want you to leave their website or application ecosystem. They know that the longer you stay, the more likely you are to buy stuff from them (or see their ad and be thus disposed). They also know that if you hang out on their website and enjoy it, you will ask others to join you there. They know that the more people they attract, the more revenue they make. Why would they go against their own interests?

While most rivals chafe that these firms are cornering the market, they realise that the only way to survive on the internet is to do exactly the same thing. Notice the rise in the number of ‘like’ ‘recommend’ ‘share’ ‘+1’ buttons on other websites? They realise that the best way they draw people back with their friends is if it’s easy for them to share their websites’ content. In fact, digital agencies (disclaimer: I own and run one) survive by helping other firms take advantage of the information on the social web. When the same businesses or people complain that Facebook owns everything, they’re not being too honest about what they do or would like to have done had they had a crack at doing likewise.

The business logic is near perfect; if you don’t agree with me, look at the $5 billion that Facebook plans to raise via an IPO. This implies the business is valued at $100 billion, which, as Mashable explains, is ‘four times what Google was valued at when it went public.’  But that doesn’t make it less creepy or mean that consumers must sign away all their rights before they get access to anything. There is some truth in saying that shunning the social web is your loss. Whether it’s finding a job or staying in touch, it makes interaction convenient to the point that not using it will hurt your interests.

What we consumers, you and I, want is to have all the conveniences of the social web without being profiled and targeted. The information that businesses have on us is indeed scary. Also, I want to be able to buy products without getting recommendations on thousands of things I wasn’t looking for. I want to be able to write to friends about my feelings without having to see ads for self-help books or advisories.

Yet, this desire is also incredibly naïve. While it’s inherently Indian to want everything free, these services cost money to set up and run. One way or another, there is something they demand of us in exchange. Given the choice, we can give up, pay up or look for other bargains. What we can’t do is stay lazy and expect firms to do exactly what we want and pick up the tab too.

When I sit down to devise marketing strategies on social networks, I behave like Facebook. I want to know everything about you. But when I want to talk to friends or browse vacation pictures, I want to be left alone. I’m unable to reconcile the two. They are two facets of the same world. It’s like driving in Delhi: when I ride my motorcycle, I feel that all car drivers are sadistic murderers trying to run me over, but when I drive my car, I feel that traffic-weaving motorcyclists need to be shot. Yet, it’s my choice what vehicle I take and my responsibility to stay safe. I don’t blame the guy who built the roads.