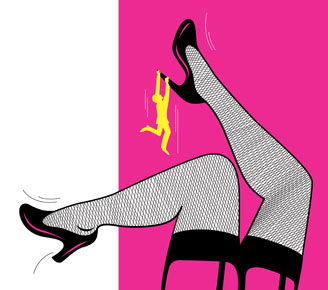 When she feels lonely, Saniya Mishra no longer feels the need to turn to a man for comfort or gratification. Instead the 29-year-old Delhi University graduate simply books an appointment at her neighbourhood spa. Located above a grocery store near Sushant Lok Phase II, Gurgaon, the two-floor spa has become the go-to destination for many single women in the area. The treatments on offer here are relaxing, indulgent and, above all, discreet. “Relationships are overrated. Spending time with the same man over and over again is boring and mentally exhausting. Even meeting new men isn’t always fun—who has the time for endless small talk? If I ever feel the need for a bit of pampering, I skip all the complications of a date and head straight to the Salt Room,” says Mishra.

The Salt Room is the site of the spa’s most popular treatment. It involves massaging a special blend of ‘sex salts’ (pheromone- infused bath salts) into the skin using both hands and feet. Customers can opt for a male or female therapist. “I was initially put-off at the thought of being massaged by someone else’s feet. But it isn’t what it sounds like. The feet are only used to rub the salts onto the lower back. The feeling is incomparable— pure ecstasy,” says Mishra. Sitting in a blue Turkish towel at the spa’s granite-tiled reception, she has decided to opt for something different today. “Sometimes I like to experiment,” she says and heads off with a male and female therapist for a Fruit Sandwich treatment. “They stroke and rub you with a fruit of your choice. I’ve decided to go for papaya and mango… and a full body massage.”

The manager, who also happens to be the spa’s owner, tries to convince me to book one of the 25 treatments listed on the official menu. When I refuse, he offers to create a bespoke massage, just for me. It will only set me back by Rs 5,000, but, as he goes on to explain, the price is nothing compared to the pleasure I am guaranteed to receive. “Women have evolved beyond the Thai, aroma or Swedish massage. Now they are looking for something new, exciting and unique,” he says, “Experience has taught us to be ready for custom requests. Some women like to be massaged by six or seven therapists at one go. Some ask for the pressure to be extra hard and firm. And then there are those who want to decide the order in which the massage is carried out—which body part to touch and when. I have never seen a customer leave us looking unhappy.”

Two hours later, Mishra returns to confirm the manager’s boast. She’s flushed, both from the pressure of the massage and the steam shower she took afterwards. “I love knowing that I am in complete control over my body. I decide what is to be done with it and how. That feeling reassures and relaxes me all the more. Previously, I have always been with men who have tried to dominate and rule over me. Here, it’s not like that. Here, the women are in charge. And that’s why the spa never disappoints,” she says. Then adds, “Of course, physical relaxation isn’t everything. When I feel emotionally needy, I turn to a single women’s group that I am part of… we’re seven school friends who’ve chosen single life and pledged to support one another through it all. The more I think about it, the more I am convinced that life without a man is now finally possible.”

For several single women like Mishra, life without a man is not only possible but also, at times, more satisfying; the same, it seems, cannot be said of their male counterparts. A 2015 survey conducted by University College London, the London School of Economics and The London School of Hygiene and Tropical Medicine found that single women do not suffer the same negative health effects as unmarried men. It concluded that while relationships benefit men, women gain very little from tying the knot. ‘Not marrying or cohabiting is less detrimental among women than men. Being married appears to be more beneficial for men,’ says George Ploubidis, a population health scientist at the UCL Institute of Education. Delhi-based psychiatrist Dr A Nair adds that women are emotionally more capable of enduring and enjoying ‘alone time’. “Women tend to have deeper emotional connections and support within their peer and family groups. This helps them deal with being alone in a more mature manner than most men. It’s usually familiar pressure, popular culture and fear of becoming a social outcast that drives women to stress [themselves] about marriage and relationships. But now this is changing—Indian women no longer want to get married ‘for the sake of it’. Instead they are searching for a good reason to get hitched, in the absence of which they would prefer to remain single,” observes Dr Nair.

A survey by the data journalism website IndiaSpend last year shows that there is indeed a growing trend among Indian women to stay single. There are currently an estimated 71 million single women in India (including widows, divorcees, unmarried women—all above the age of 20), a 39 per cent increase in the last 10 years. “Men are dispensable today. I certainly don’t need one to feel complete. I can have an amazing life with or without a ring on my finger,” says Preethi Thomas, a graduate of Stella Maris College in Chennai. “Women have changed in India. My friends and I are more aware of what we are looking for in life and in a relationship. Most Indian men aren’t mature enough to handle our independence. It takes a different kind of man to nurture a relationship with a woman who can look out for herself. A secure man will never say that his masculinity is threatened in the presence of a feminist. But that’s not how it is in India,” says Thomas, adding that she’s often been asked if she is a feminist by different men. “Such conversations always take a turn for the worse, especially when I respond with, ‘Yes, aren’t you?’ Now I have given up trying to reason [with them]. I’m not trying to make a point or prove that girls are better. I am just being true to myself and reaching out to pursuits that make me happy; pursuits that are now possible without men.”

The same holds true for 38-year-old Sheetal Kaleka. After a ten-year relationship with her husband (now ex) turned sour, Kaleka, who has lived in Mumbai all her life, chose to never marry again and devote her life to yoga—tantric yoga, to be specific. “I got married and it only led to misery, court cases and poverty. He sued me for my child and half of the money my parents had left me. He bribed the judges and managed to pass me off as an alcoholic because I kept a wine cellar in our house. Men are assholes. Now tantra.” She purrs the last line out slowly, gesturing to the satin-covered diwans and paintings of busty naked ladies in the room behind her. “Tantra is not complicated like a man. It can never hurt you… only pleasure you,” she enthuses.

Kaleka now runs a private tantric yoga travel agency that plans weekend getaways, short courses and long-term stays exclusively for women. “Istanbul is very popular among Indian women for tantric weekends. And because I myself am a woman, my clients don’t have to shy away from voicing their needs to me. I get a lot of requests for co-ed naked yoga sessions these days. Women no longer need a man to make them happy. I do think that scares the shit out of some men though— that’s why there is still so much taboo attached to a woman seeking erotica for herself,” she says, adding that most of the customers she receives are businesswomen or working women between the ages of 28 to 40. She says she caters only to the upper crust, who she feels are now able to afford a life without men, unlike the less well-off who are often constrained by their finances to stick with their husbands. “My packages are expensive because I will only plan for you to attend the top tantric institutes in the world. For a weekend getaway of just basic tantric yoga, you can easily expect to pay at least Rs 1.5 lakh. In the future, I would like to provide services for less-privileged women as well. But right now, I need money for my own needs,” Kaleka says, grinning mischievously and showing me a brochure for the White Tantric Yoga Retreat in Los Angeles. “Lots of women are happy with being single these days— it’s a growing trend.”

Amrita Bhateja, a Mumbai-based couples counsellor, has also noticed the change in relationship dynamics. Several of her clients are women who want to talk about cultivating a relationship with themselves. “I received a client recently who told me that she now wrote love letters to herself every day. She said it made her feel empowered and confident. Many women now question why the most important person in their lives has to be a man. They want to focus on themselves first and are quite satisfied with being single till the right man comes along. Education, foreign travel, full-time employment, secure finances, social media, in vitro fertilisation and the availability of female-centric erotica are some of the devices that have made women more confident and self-reliant.” Adds Dr Mahinder Watsa, the 91-year-old sex expert, “Women are more confident and assertive about what they expect from relationships now. Their attitudes towards both men and themselves have changed drastically.”

Agrawal is also a patron of her own neighbourhood spa. The Banerghatta- based spa charges Rs 4,000 to Rs 6,000 per massage and an additional Rs 2,000 for tailored treatments and ‘props’. Agrawal visits it once a month for a few hours of unrestricted fun. “There are some businesses now that are realising the benefits of cutting down on moral judgement. I love knowing that I have a place to go to that respects my wishes and caters to my every desire,” says Agrawal, who recently bought her first sex toy from an offline shop. “I was pleasantly surprised with the level of privacy they offered. It was delivered in a cardboard box with no mention of what was inside. They also made sure that the box was delivered to only me and that no one else could sign for it. This now means that I no longer have to shop from international sex stores alone. It’s finally safe and feasible for a single woman to have a life of her own in India. After all, who can understand and love me better than myself?”